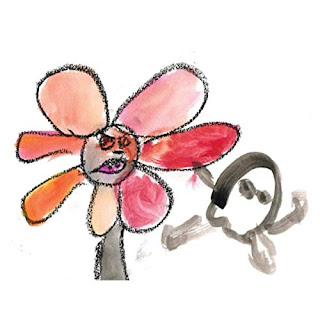 If you are looking for an unusual voice in independent music and can get your hands on a copy of the limited edition vinyl release of One Day (A Journal), the latest album from Anthony W. Rogers, I think you are going to be delighted. The music is raw, quirky, at times psychedelic, and with plenty to say. And it comes in an unusual package. It is an album and a half of material, with the first four songs on a 7-inch and the rest on an LP. Anthony W. Rogers plays most of the instruments, but joining him on this release are Audrey Rogers, Joe Rogers, Bart Lay and John Harman. (Joe Rogers also provides the album’s cover art.)

The music begins on the single, with two songs on each side. The first track, “Mash,” opens with a playful taunting and teasing sound, “Na na na-na na-na,” and the first line is “Morons in Charlottesville.” So, hell yes, I’m on board straight away. I needed this song. There are days when the fact that Trump is in the White House is too much to bear, and I want to lash out at some asshole in a red cap. Perhaps it’s better that I just enjoy this album. That’s followed by “I’ll Take The Blame,” which has something like a 1960’s garage sound and also a lively pop vibe, with some cool vocal work. The second side of the 7-inch opens with “Half The Picture,” which has a dreamy kind of vibe. “Way back when we were young/We could do just what we liked/Slip away for the day/Might last the rest of your life.” The 7-inch ends with “House On The Hill.” “Once had a love, but I failed to treat her right/I drank, pushed, and chipped at her dignity ‘til/One morning she walked out on me.” There is some blues to this one, in the vocal delivery. And some of the guitar work has a mesmerizing quality. “I’m dying here alone, god have pity on me.”

The first side of the LP opens with “Into The See,” a strange, slightly trippy number, made even odder by the way the children’s voices back Anthony’s vocals. “I’m lying in my quiet space/No stars fall out/Shining without you/They’re reckless or paralyzed/How could I pretend there’s nothing lighting me?” Then the first line of “Roman Candle” holds a lot of appeal, partly because I am a person who makes lists: “I’m making a list of all the things I will regret.” That’s a damn good line. This song has kind of a loose vibe, with a sound that has something of a 1960s psychedelic element, but also a 1970s pop feel. “It’s hard to put anything/In perspective in your mind/When you don’t know what you’ve got/And don’t know what you want.” “Fly Away” has a darker sound at the start, and becomes a kind of trippy number too. This is music you feel you should just let scoop you up and take you where it will. This track features some really nice vocal work. “And in the words I say/Just float right by right away/Until they spill out your mouth/Four months down the line.” “In The Water” is a cool, odd tune that begins with some jazzy elements, and has a kind of sly sound at moments, with the lines delivered almost like beat poetry. It has something of that vibe, you know?

The second side of the LP opens with “Ploom MFs,” a song that begins quietly, almost like it is hesitating. And then bam, it kicks in, and becomes a funky, strange tune with a strong beat. “Well, your church now/Ain’t gonna save ya/From the clamping down/In the small, small towns/And hate is rolling round and round/And murder in your…/Devil in your…/Murder in your heart.” This is excellent, and is one of my personal favorites. That’s followed by “Range Rover,” which is also, at least in part, about the beat. “What are we gonna do about you now?/The sun went down, let’s raise some hell now/Someone told me you like guns…wow/What are we gonna do about you now?” By the way, this song is dedicated to the spirit of Oscar Zeta Acosta, a person I became aware of because of his association with Hunter S. Thompson. The song kind of drifts off at the end, and then “And When They Ask You” fades in. This one is a mellow tune with some lines that stand out, like “When he shook the fog” and “When every thought you have/Every word a bust to the face.” The LP concludes with “Mash (Reprise)/Cocks In The Field,” a return to the first track from the 7-inch, but with some changes. It is an unusual, fantastic tune, like pop turned inside out and spread onto a slice of human toast. And it gets weirder from there, feeling delightfully twisted, the perfect song for us these days.