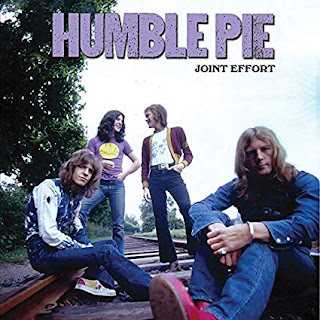 Humble Pie was formed when vocalist and guitarist Steve Marriott left Small Faces. The original lineup of the group included Peter Frampton, but by 1971 he was replaced by Dave Clempson. The band also included Greg Ridley on bass and Jerry Shirley on drums. In 1974-1975, they recorded Joint Effort, at the same time they were recording Street Rats. Street Rats was released in 1975; Joint Effort was released yesterday. Interestingly, a couple of songs ended up on both albums – covers of “Rain” and “Let Me Be Your Lovemaker.” Liner notes by Dave Thompson tell the story of how this album came about. The band broke up not long after both albums were recorded, though reunited four years later for a brief period. The tracks on this release will certainly be cherished by Humble Pie fans. But even for those with only a slight interest in the band, there is some good material here, tunes worth checking out.

The album opens with a cover of “Think,” a song written by Lowman Pauling and made famous by James Brown (the liner notes erroneously credit Brown as the writer). The song was originally recorded by The “5” Royales, but it is the James Brown version that provides the inspiration for this Humble Pie rendition. This is a delightful, funky number with an edge, particularly to the vocal delivery. This track has a raw, loose power, and is a lot of fun. It should get you on your feet. “Think” is followed by “This Ol’ World,” a song with a good deal of soul. I love that guitar. This one too has something of a raw, unpolished sound. It was written by Steve Marriott and Greg Ridley. “This ol’ world can’t last too long/The way some people carry on.” Yup. And I love these lines: “Stand and be counted, y’all, as a people and not a nation/We’ve got the power, but not a one of us has got the inclination.” This is one of my favorite tracks. “Midnight Of My Life” is another of the album’s strongest tracks. It too has soul and a great vibe, as well as powerful and passionate vocals. It’s a song you can sink your teeth into.

The two tracks that would be included on both Street Rats and Joint Effort are “Let Me Be Your Lovemaker” and “Rain,” and on this album the two are presented one after the other. “Let Me Your Lovemaker” is a song that was a hit for Betty Wright in 1973. Humble Pie’s rendition has a heavier sound, more of a rock tune. Then the band’s cover of The Beatles’ “Rain” has a full and raw 1970s rock sound. That’s followed by “Snakes & Ladders,” a thumping, heavy tune written by Steve Marriott. “A Minute Of Your Time” is a slower, soulful number, and another of the disc’s highlights. That’s followed by “Charlene,” a very cool, kind of funky rock tune with an opening line that surprised me: “Let me tell you, when I was rich I was a son of a bitch.” The album ends the way it began, with a cover of “Think,” titled “Think 2.” It fades in like it’s a reprise, but it’s nearly as long as the disc’s opening track. This is a fun, funky jam, a great way to wrap things up.

CD Track List
Joint Effort was released on February 8, 2019 through Deadline Music, a division of Cleopatra Records. It is available on both CD and vinyl (I want to get a copy of this one on purple vinyl).
Posted by Michael Doherty at 3:15 PM