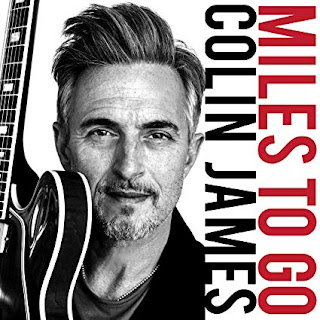 In 2016, singer and guitarist Colin James released Blue Highways, an album where he covered some excellent blues tunes. Now he has followed that with Miles To Go, which also contains mostly covers, but some original tunes as well. There are some really good choices as far as the cover material goes, with Colin delivering renditions of tunes by Muddy Waters and Blind Willie Johnson. Joining Colin James on this release are Geoff Hicks on drums and percussion, Steve Pelletier on bass, Jesse O’Brien on keys, Simon Kendall on organ, Chris Gestrin on piano, Chris Caddell on rhythm guitar, Steve Marriner on harmonica, Steve Hilliam on tenor saxophone, Jerry Cook on baritone saxophone, Rod Murray on trombone, and Colin Nairne on synthesizer. The Sojourners and Colleen Rennison provide backing vocals.

Colin James opens this album with a lively and groovy rendition of “One More Mile,” a Muddy Waters tune. The horns and harmonica together sound so damn good, and that sound contributes a large part to my enjoyment of this track. It becomes a good jam, with plenty of nice work on guitar and keys. Colin James follows that with another Muddy Waters song, “Still A Fool.” This one begins with vocals and guitar, establishing a cool style. Then the band kicks in, and the song takes on a heavy blues rock vibe. “Dig Myself A Hole” has more of fun vibe from the start, with a strong rhythm and some good work on horns. Yet, the lyrics provide a warning about the dire state of the world. This song was written by Arthur “Big Boy” Crudup, and included on his 1962 LP, Mean Ole Frisco. Though the song is several decades old, it is so fitting for these days when things have gone so wrong. Could they get even worse? It’s certainly possible, the longer Donald Trump and his fellow fascists are allowed to remain in power. Someone needs to pay a visit to those demented racists, put an end to this horror show. “Well, the whole world’s in an uproar/People all sing the same song/If we don’t stop messing up, you know we sure won’t be here long/I’m going to dig myself a hole, move my baby down in the ground/And when I come up, there ain’t gonna be no one around.”

“I Will Remain” is one of the album’s original songs written by Colin James. It is a somewhat mellow blues tune, featuring some good work on guitar. It also offers some comfort, something we all need these days. “When all seems lost and you don’t know where to turn/And all the white lines on the highway blur/Just call my name and let me ease the pain/I will remain.” I love those gospel backing vocals. That’s followed by another original tune, “40 Light Years,” this one written by Colin James, Tom Wilson and Jesse O’Brien. This one has something of a playful feel, and is kind of catchy. “I’d like to get to know you/But you’re forty light years away.” It features more strong work on harmonica. “Ooh Baby Hold Me” is another fun one, a totally catchy Howlin’ Wolf tune featuring a delightful jam. Then “Black Night” gets off to a great start on keys. This is a mellower, late-night blues number about regretting that another day has passed in loneliness. “Nobody cares about me/I ain’t even got a friend/Baby’s gone and left me/When will my troubles end?/Black night is falling/Gee, how I hate to be alone.” It features a really nice vocal performance, as well as some good work on guitar. “Black Night” was written by Jessie Mae Robinson, and was a hit for Charles Brown in the early 1950s.

“Soul Of A Man” opens with a bit of harmonica, then establishes a delicious groove. This is a seriously good rendition of the classic Blind Willie Johnson song, certainly one of the disc’s highlights. I like the use of backing vocals here. This track ends as it began, with harmonica. That’s followed by “See That My Grave Is Kept Clean,” a Blind Lemon Jefferson song that is sometimes listed as “One Kind Favor.” This one has been covered by a lot of artists over the years, including Bob Dylan, B.B. King, Canned Heat and the Grateful Dead. This rendition by Colin James opens with some good work on guitar, and has a great, dark acoustic feel. We then go back to an electric blues sound for a cool cover of Little Willie John’s “I Need Your Love So Bad,” featuring nice stuff on keys. Then Colin James’ rendition of “Tears Came Rolling Down” has a harder blues sound. The album began with Muddy Waters’ “One More Mile,” and it concludes with a different version of that same song. This second version is a cool, stripped down acoustic rendition, with good work on guitar and some wonderful backing vocals.

CD Track List
Miles To Go was released on September 21, 2018 on True North Records.
Posted by Michael Doherty at 11:58 AM