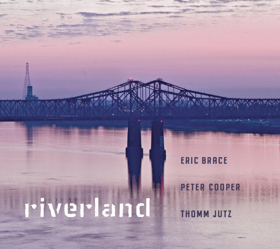 Even a glance at the track list of “Riverland,” the new release from Eric Brace, Peter Cooper & Thomm Jutz, gives you an idea that there is a theme running through this album. With titles like “River City,” “Down Along The River,” “In The Presence Of The River” and “To Be A Steamboat Man,” you know that the Mississippi River plays a key role in this material. The album features original material, and the sound is a combination of folk, country and bluegrass elements. Joining the three vocalists and guitarists are Mark Fain on upright bass, Lynn Williams on drums, Mike Compton on mandolin, Tammy Rogers on fiddle, Terry Brucom on banjo, and Justin Moses on banjo.

The album opens with “River City,” which has a sweet, gentle folk sound, a comforting, friendly sound. There are characters who come and go, but the constant character here is the river itself. “Some people put their roots down by the river/Where ties that bind will hold but do not tether.” It was written by Peter Cooper, Thomm Jutz and John Hadley. It’s followed by “King Of The Keelboat Men,” written by Thomm Jutz and Eric Brace. This one has a more cheerful and cool vibe, and features some good blending of voices on the chorus. There is something truly catchy about this track. “I didn’t take orders from anyone/I was cursing the current and cussing the sun/There ain’t no honor in shoveling coal/I covered the distance pushing a pole.” There is certainly something appealing, something romantic about those old boats, and about the folks that powered them. And that appeal is in this music.

“Drowned And Washed Away” is a wonderful bluesy number about the flood of 1927. Other songs have been written about this flood, of course, including “Mississippi Heavy Water Blues,” “Southern Flood Blues” and Randy Newman’s “Louisiana 1927.” Something about this event has led to some excellent songs, and “Drowned And Washed Away” is no exception. This is a strong track written by Eric Brace and Thomm Jutz. “No one expected the river to rise/At least not as much as it’s done/But the rain kept on coming/It keeps coming still/So many days we’ve forgotten the sun.” Justin Moses plays banjo on this track. We then get “Tom T. And Brother Will,” a pleasant bluegrass tune about Tom T. Hall and Will D. Campbell, written by Peter Cooper and Thomm Jutz. That is followed by a song written by Will D. Campbell, “Mississippi Magic,” the album’s only cover. This track features a spoken-word introduction about James Meredith, the first black student at the University of Mississippi.There is more spoken word throughout the song. “That Mississippi magic/Is Mississippi madness now.” It is a song about racism, which is again a frightening and depressing problem. It seemed for a time that we had made some progress; but then Donald Trump’s administration and his horrible supporters showed the world that racism hadn’t really gone anywhere.

“In The Presence Of The River” is a pretty folk song that has a reverence for the river. “It draws me in, it pulls me under/It makes me weep, it makes me wonder/Don’t know about you, but I quake and shiver/In the presence of the river.” That’s followed by “Southern Mule,” a cheerful, jazzy number written by Peter Cooper, Thomm Jutz and John Hadley. This tune has a playful vibe, and some wonderful blending of voices on the chorus. “I’ve seen ‘em come, I’ve seen ‘em go/Me, I just walk another row/I’m just a tired old southern mule/Wise as you, you common fool.” I particularly like that last line, “Wise as you, you common fool,” a strange line that is boasting, but isn’t. You know? “To Be A Steamboat Man” also features some nice vocal work.

“It Might Be Hollywood” is rather amusing to me, living as I do in Los Angeles, where – by the way – I often walk. The song touches upon that famous meeting of Mississippi author William Faulkner and Clark Gable, where Clark asked Faulkner, “Do you write, Mr. Faulkner?” and Faulkner replied, “Yes, Mr. Gable, what do you do?” I love the work on fiddle on this track. “Now anyone can find you and that’s a crying shame/Solitude and paper is all that I desire/They ask about my creed and then say that I’m a liar.” “Fort Defiance,” written by Eric Brace, paints a vivid picture of a retired couple watching boats on the river. Seems like a good way to pass the time. Terry Brucom plays banjo on this track. The disc then concludes with “Mississippi, Rest My Soul,” a sweet and pretty tune written by Thomm Jutz and Tammy Rogers that features some beautiful work on fiddle and some really nice vocal work. Justin Moses plays banjo on this one. “Lay me down deep when my day’s done/Dust to dust I’ll soon become/That’s what I want and who I am/A part of this old land.”