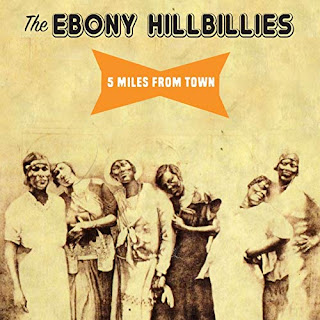 On their new album, 5 Miles From Town, The Ebony Hillbillies deliver some fantastic music that encompasses elements of folk, bluegrass, blues, jazz, pop and country, presented with great abandon and joy and honesty. The group is based in New York, and certainly some of that city sensibility finds its way into music that otherwise could be expected to have originated on a porch in some southern town. The group has a good range of influences, and features both male and female lead vocalists. The band consists of Henrique Prince on violin and vocals; Norris Washington Bennett on banjo, mountain dulcimer, guitar and vocals; Gloria Thomas Gassaway on percussion and vocals; William Salter on acoustic bass; Allanah Salter on percussion and vocals; Newman Taylor Baker on washboard; and Ali Rahman on percussion.

The album gets off to an excellent start with “Hog Eyed Man,” and I’m on board as soon as it begins. Their rendition of this tradition instrumental tune has some delicious bluegrass vibes, and features some fantastic playing, particularly on fiddle. There is nothing sluggish about this rendition; it cooks along. It’s followed by a seriously cool rendition of Willie Dixon’s “Wang Dang Doodle.” This is a song I learned as a result of being a Grateful Dead fan. I’ve heard a whole lot of other bands cover this song since those days, but I’m not sure I ever heard a rendition quite like this one. It’s glorious and raw and fun and wonderful, and it has that sense of a party that Dixon always intended. The percussion certainly contributes to that air. I love it. The group then delivers a nice take on the old folk song “Darling Corey,” with some loose percussion, which I totally dig. But it is the vocal performance that makes this one of my favorite tracks.

The Ebony Hillbillies then go in a different direction with a gentle, engaging rendition of “I Can’t Make You Love Me,” a song written by Mike Reid and Allen Shamblin, and recorded by Bonnie Raitt. The track contains a bit of goofiness at the end (the “ZYX” part of the track). That’s followed by “Carroll County Blues,” a fun instrumental number. This version is a total delight, with a bit of banter and laughter in the background, giving it the atmosphere of a party on the porch. Things then go in yet another direction with an unusual cover of Prince’s “Cream,” done as a folk tune, the banjo being prominent. Since Prince’s death, I’ve heard several folk versions of “Kiss,” but none of this particular song before. There is something undeniably playful about this track, yet there is also an odd power to this one. As the Prince song ends, we get an a cappella delivery of “I’m On My Way To Brooklyn (Yes Indeed),” a strange segue to be sure. The track finishes with the sound effect of a gun being fired, which is jarring, but which leads directly into a rendition of “Another Man Done Gone,” here titled “Another Man Done Gone (Hands Up Don’t Shoot).” In this powerful version, the man in question isn’t chained or lynched; he gets shot in his car. It’s about police violence, and the track features an understandably angry delivery and a great raw folk sound, with a bit of a gospel feel as well. “He said he couldn’t breathe/He said he couldn’t breathe/He said he couldn’t breathe/He didn’t have a gun/He didn’t have a gun/He didn’t have a gun.”

Then “I’d Rather Be A Nigga Than A Po’ White Man” will raise you up, get you on your feet, as this instrumental track opens with some great fiddling. Their cover of The Miracles’ “Fork In The Road” also begins with fiddle, but has a very different feel, a pretty sound. Then the tune kicks in, and has a wonderful classic rhythm and blues vibe. That’s followed by “Oh What A Time!” with lyrics addressing our nation’s recent history, with a verse about the 2008 election: “Everyone thought we had it all/It seemed our dreams had all come true/The whole wide world, they thought it too.” This one is delivered a cappella, but with an odd background sound, like it was recorded using some amateur equipment or under less than ideal conditions. We then go into gospel territory with “Where He Leads Me (I Will Follow),” presented as a combination of folk and gospel. “I can hear my savior calling/I’ll go with him, with him all the way.” This rendition has a gentle, comforting feel. The disc concludes with its title track, “Five Miles From Town,” a fun, toe-tapping, knee-slapping, partner-swinging song. This hoedown number has a cool percussion section at the end.