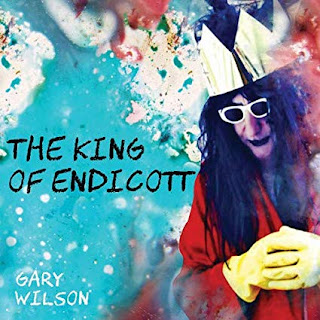 Gary Wilson’s new album, The King Of Endicott, features several tracks with Endicott in their titles, such as “Midnight In Endicott,” “A Perfect Day In Endicott” and of course “The King Of Endicott.” So where is Endicott anyway? It’s a small city in New York, named after a man who started a shoe company, and is known as the place where IBM was created (you know IBM, that U.S. company that worked closely with Hitler’s Nazis to make the Holocaust run more efficiently). Some famous folks hail from Endicott, including Rod Serling, Amy Sedaris and – most importantly for our immediate concerns – Gary Wilson. Gary Wilson, that wonderful and talented do-it-yourself weirdo, released his most famous album, You Think You Really Know Me, in 1977 (it has been re-issued a few times since then). After that album, many years passed before Gary Wilson put out any new music. But since his return, he has been quite active, releasing several albums. The latest, The King Of Endicott, features all original material, written and performed by Gary Wilson. The music here is an odd brand of pop, with enough quirks and joy and originality to make even the most jaded of music listeners smile.

The album opens with “The King Of Endicott (Intro),” a short introduction to the strange world of Endicott, the strange world of Gary Wilson. “Don’t be afraid,” he tells us, then explains that Endicott is a magical land. (The town’s nickname is Magic City.) This track features Frank Roma on saxophone. “It’s going to be a special night tonight,” he promises. And I believe him. That’s followed by “The Town Of A Thousand Lights,” a goofy and bright pop tune, probably unlike anything else you have in your music collection (unless of course you have some of Gary Wilson’s other albums). Here is a taste of the lyrics: “Listen to the wind/It wants to be my friend/We already made a date/I promise you I won’t be late.” This song also mentions The Twilight Zone, a little nod to another of Endicott’s famous sons. Then we get “The Lonely Park,” in which he repeats his earlier message, “Don’t be afraid,” which of course worries me. What’s going to happen to us if we go with this guy into the lonely park? I don’t know, but I can’t turn down his invitation. “Let’s take a walk into the lonely park.”

“I Think I’m Falling In Love” is a total delight. Love in this song sounds like a carnival ride for wayward children, like having a mirror above your bed, but making it a funhouse mirror (okay, that actually sounds kind of cool). “You looked into my mirror/Your eyes were filled with tears/I think it’s ‘cause I’m falling in love/I just want to dream with you tonight.” That’s followed by the album’s title track, “The King Of Endicott,” in which he sings that he’s going to take us to his magical land. Man, this entire album feels like it’s already there in that land, like everything is taking place there. This music is like a neighborhood made of candy. I want to take a bite here, take a bite there, while running around and playing.

“I Dream Of My Secret Girl” is kind of jazzy, but with an artificial feel, like a lounge singer broke into Hunter S. Thompson’s medicine cabinet. It is quirky and catchy. “Late at night I dream of my secret girl/Where birds can sing and trees can swing/It’s a perfect world.” That’s followed by “Midnight In Endicott,” another track that is just a delight, and takes me back to my own childhood, growing up in a small town and starting a band with friends and so on. “When I’m walking through the woods, it’s so much fun/I can feel the rain, it’s falling from the sky/Let me tell you something, baby, I won’t lie/I don’t want to be alone tonight.” This is a playful, wonderful tune. We go from midnight to day with “A Perfect Day In Endicott,” a peppy, fun number. “I don’t have to be alone/I bought a new telephone.”

At the beginning of “Mary Walked Away,” Gary sings, “play that organ.” Is he speaking to himself? It’s my understanding that Gary plays all instruments on this release (apart from the saxophone on the first track). I occasionally talk to myself, so I’m not judging. Then he says, “Sounds so good,” giving himself some encouragement. I do the same thing. Well, when I’m not berating myself, that is. “Oh, that sounds so nice.” Ah, when you’re right, you’re right. This song also mentions Endicott: “You’ll be the queen of Endicott, and I’ll be the king.” Well, if things weren’t odd enough for you so far, Gary then gives us “Another Dimension.” Another dimension, indeed! This one might be a bit frightening for those of you on acid, but if you’ve been smoking pot, it should be just fine. This album ends with “Hail To The King,” a song in which he is celebrating himself, I suppose; after all, he is the king, right? It concludes with a spoken word section: “Gather the gentle people of Endicott/We’re going to take a walk/Near the Northside Park tonight/And I’ll tell you all about the rain and the woods and the river and the wind/Come gather, my good friends/I have something to tell you tonight.”

CD Track List
The King Of Endicott was released on February 8, 2019 on Cleopatra Records.
Posted by Michael Doherty at 12:51 PM