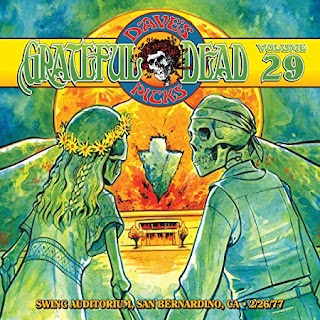 I had a friend who did not like the Grateful Dead and who firmly believed a song shouldn’t be longer than three or four minutes. Then I played for him the studio version of “Terrapin Station,” which is sixteen minutes. He loved it. “Terrapin Station” is one of those magical songs that transports us and lifts us up. One word in the song is able to raise us on its own: “Inspiration.” When Jerry Garcia would sing that single word, the entire audience was carried to some higher plane. And it worked every time. The new volume in the Dave’s Picks series contains the complete show the Grateful Dead performed on February 26, 1977 at Swing Auditorium in San Bernardino, California. This show features the debut performance of “Terrapin Station.” For that alone, it’s an important show in the history of the Grateful Dead. But this concert also saw the debut of “Estimated Prophet,” another of the band’s greatest songs. Most of us had this show in our tape collection, and it’s fantastic to finally have an official release of this one.

The first disc contains the first set. And the band wastes no time. They open the show with “Terrapin Station.” It has a slightly tentative start, but the moment it kicks in, you know it’s something special. What must those in attendance have thought at hearing this song for the first time? Perhaps the same thing my friend thought upon hearing it some fifteen years later. We always went into a Dead show hoping for a little magic. This crowd got it from the moment the band began to play. “A rare and different tune,” indeed! And the sound is so good. They might not have been certain yet how to end the song, but no matter. Bob Weir then announces they’re experiencing technical difficulties. Ah, yes. That was often a part of the experience. Bob then leads the band into “New Minglewood Blues,” a straighter rockin’ number to get everyone grooving. This version moves with a delicious ferocity, and features some great stuff on guitar. “The doctor called me crazy/Sometimes I am, sometimes I ain’t.” The band follows that with a sweet rendition of “They Love Each Other” that becomes a nice jam. They then introduce their fans to another gem, “Estimated Prophet,” a song that would end up on the Terrapin Station LP a few months later. This is a song that Bob would often really sink his teeth into, and he clearly wanted to introduce it that way, as a powerful song, for this is a damn good and exciting version. So interesting to hear this song in the first set. Then we get an excellent “Sugaree,” with some glorious peaks. Yes, the band is definitely on.

“Mama Tried” is in the Country Bob slot, and it’s a fun, kind of bouncy rendition. It’s not paired with anything this time, as it often was, and soon Jerry leads the band into an energetic “Deal.” Then we get into some serious jamming to end the first set. Bob keeps the energy level high as the band launches into “Playing In The Band.” This version rocks, but the moment it goes into the jam, things begin to get interesting, as they move over the landscape, exploring the contours, dipping into greens and yellows, yet constantly moving forward, gathering folks along the way, propelling them along their own journey ahead. Forward, forward, but not too far out. No need to stray, as everything is immediate. Everything is right here. As things begin to relax just a bit, as we take stock of what we have, what we’ve learned, and what is still ahead, the band slides into “The Wheel.” Fucking perfect. “A little bit harder, just a little bit more/A little bit further than you’ve gone before.” Oh yes! And then we’re back in “Playing In The Band,” easing into it and then exploding into sunlight. And, holy moly, this is just the first set.

The second disc contains the first hour or so of the second set. After a bit of tuning, including some fun on keys, they come roaring out of the set break with a thumping rendition of “Samson And Delilah,” another tune that would end up on Terrapin Station. Keith provides some nice work on piano again while the band tunes, and then they go into a pretty good version of “Tennessee Jed” and follow it with “The Music Never Stopped,” a tune that always gets me dancing, even if I’m alone in my apartment listening to it on CD. It’s unusual to hear this one in the middle of a set. The band is rocking along at this show, no real slow songs, which is also unusual. “Help On The Way” has an interesting start, and a jazzy vibe. “Without love in the dream, it’ll never come true.” Must keep that in mind these days. The song segues into “Slipknot!” Man, I love lying on the floor and letting Phil’s bass vibrate in my chest and head. This “Slipknot!” gets kind of wild, an unhinged beast claiming all the surrounding land as its own, its large arms striking out at the hills. Then it finds its own balance, its happiness, and begins grooving as the band goes into “Franklin’s Tower.” This is a really good rendition, with plenty of fun, bright jamming. The second disc then concludes with a good dose of rock and roll, “Promised Land.” There is a bit of a “St. Stephen” tease on guitar before the disc ends (they would play “St. Stephen” the following night).

The third disc gets off to a fantastic start with “Eyes Of The World,” a song that never fails to raise my spirits. That delicious groove seems like it could heal us of all wounds. This is a wonderful version, with Phil’s bass prominent in the jam after the final verse. That jam leads directly into “Dancing In The Street” with a beat to keep everyone moving. It’s a whole lot of fun, and it goes straight into “Around And Around” to wrap up the second set. This version has a slower groove at the start, then suddenly picks up toward the end, becoming some serious rock and roll. The encore is “U.S. Blues,” a perfect song to listen to these days. And that’s how the Grateful Dead’s first concert of 1977 ended. The year was off to a phenomenal start, and would end up being one of the band’s best years.

The third disc contains some filler, the last few songs from the following night’s show in Santa Barbara. It starts with the very end of “Terrapin Station,” which quickly goes into a powerful “Morning Dew” that builds gloriously. That’s followed by a good version of “Sugar Magnolia” to finish the second set. We then get one last burst of rock and roll to round out the third disc, “Johnny B. Goode,” which was the encore that night.

Dave’s Picks Volume 29 was released in early February, 2019. My copy arrived on February 2nd. Though the Dave’s Picks series continues to be released in limited editions, the number of copies available has increased to 20,000 with this volume (2,000 more than the previous volume).
Posted by Michael Doherty at 7:38 PM