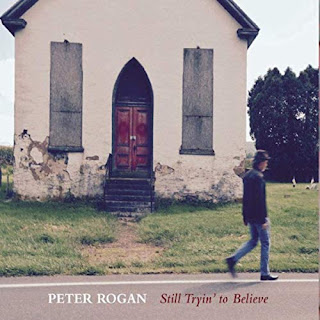 Peter Rogan is a singer, guitarist and songwriter based in Reading, Pennsylvania. He is releasing his debut full-length album, Still Tryin’ To Believe, which contains all original material, written or co-written by Peter Rogan. Joining him on this release are some musicians you are likely familiar with, including Will Kimbrough on guitar and dobro; Phil Madeira on guitar, organ, piano and lap steel; Chris Donohue on bass; and Dennis Holt on drums and percussion (Madeira, Donohue and Holt all played on Pete Kronowitt’s A Lone Voice). There are also several additional guest musicians and vocalists on various tracks.

The album gets off to a great start with its title track, “Still Tryin’ To Believe.” This is a funky, bluesy folk gem that at one point becomes a fun jam. I particularly like the work on keys. It also features some good lyrics, such as these lines: “My car flew down those back roads like a chariot in the night/The rain blew down like silver soldiers marching to a fight.” Yeah, this song has it all, including some nice backing vocals by Emma Brooke and Cliff Starkey. That’s followed by “The Only One,” which is delivered as a duet with Allison Dietz. It’s a country folk song with a pleasant vibe, featuring Rickie Simpkins on fiddle. “Flying too close to the sun/I tell her she’s the only one.”

“Kickin’ The Can” establishes a good groove and quickly becomes a fun number, the lyrics delivered almost as spoken word at times. This one gets me moving, and is one of my favorite tracks. Plus, it has some damn good lyrics. Check out these line: “Well, we're going to hell in a hand basket/Takin' a joy ride in a gilded casket/And all you get for buyin' in the system/Is deeper in debt and a bleak existence.” Craig Kastelnik joins the band on organ for this one. Dawn Blandford, Charlene Holloway and Jacqui Thompson provide backing vocals. “The Rolling Mill Blues” has a heavier blues rock sound, with a bit of a Mick Jagger sound to the vocals, and some wonderful stuff on keys. Then there is a bit of a Lou Reed sound to the vocal line of “Mercy.” The song’s opening line is compelling and pulled me in immediately: “I never knew him, but he left me this razor.” This is a strong track and features some good work on guitar.

A good groove is established at the beginning of “Sweet Baby Blues,” a song about how love can blind us to clues that all might not be right in a relationship. “There was magic in them sweet baby blues/I swear I ran the light to heaven right then/When she smiled so sweet I was born again.” I like the way the percussion remains a prominent and dominant force on this track. Hector Rosado joins the group on percussion on this one. This tune has a bluesy edge, particularly in some of the work on guitar. We then get a sweeter, mellower sound in “Beautiful Honey,” a love song. Peter Rogan goes in a different direction with “Song For Keith,” a mellow jazz piece that is the album’s only instrumental track. A different band was assembled to back Peter Rogan’s guitar on this track, including Bob Meashey on flugelhorn, Steve Varner on bass, John Riley on drums, and Ron Stabinsky on piano. The disc then concludes with “Reprise,” a brief reprise of the album’s title track. It fades in, like it’s in the middle of a jam, sort of picking up near the end of the first track.

CD Track List
Still Tryin’ To Believe is scheduled to be released on March 1, 2019.
Posted by Michael Doherty at 11:15 AM