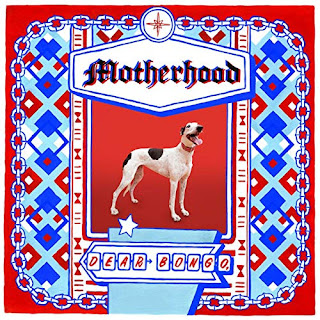 There is so much fantastic music coming out of Canada these days, and Dear Bongo, the new album from Motherhood, is among the best I’ve heard. Motherhood is the trio of Brydon Crain on guitar and vocals; Penelope Stevens on bass, keys and vocals; and Adam Sipkema on drums. They are based in Fredericton, New Brunswick, and have been playing together for the better part of a decade. The music on the new release has a wide range of styles and vibes, sometimes even within a single track. It is often surprising and always enjoyable. With one exception, all tracks were written by the band.

The album opens with “Bird Chirp,” and I’m into it right away, as that cool, mean groove is established, rock with a bit of a bluesy edge. And when the vocals come in, they have an unusual pop feel. I love it when music can surprise me, and the vocal line to this song certainly did. And the lyrics are unusual. Here is a taste: “I'm a country bumpkin slumping drunk and bumping into something/Like a little kid or something, guess I gotta live for something/I used to live for nothing/Kicking up a fit for nothing.” This song becomes catchy as well, and has delightful moments of humor, like that “wah-wah” part halfway through. I just fucking love this tune; it is such an unusual combination of elements, with a playfulness that I can’t help but be taken with. Then suddenly at the end, it goes into “Will The Circle Be Unbroken,” sounding like a separate recording of the song playing on the radio or something there at the studio. Certainly another surprise. And that is how this fantastic track ends.

Then “Way Down” begins with a completely different vibe and atmosphere. Sounds of children playing in the background are given a rather ominous feel by the haunting guitar that accompanies them. Then the song kicks in and becomes a cool tune. If you are into bands like Cake, you’re likely going to dig this. This one too goes in some interesting directions, with changes that keep you engaged. These guys can rock too. I love that rock and roll section, which even has a bit of a Beach Boys vibe, particularly the vocal work. And there is also a punk vibe to the vocals during part of that, mixing sweet and raw sounds so well. Holy moly, this band is so fucking good. This track ends with a scream. That’s followed by “#224,” an instrumental track that features another cool groove, with something of a classic rock sound at times, and elements of surf and punk. Once you are on this ride, you just aren’t getting off until the conductor says it’s okay.

“Nuns” is a mellower number at the start, with a vocal approach that reminds me a bit of Syd Barrett. This tune has a groovy, psychedelic quality that I love. I also really like the way the different voices interact in that section halfway through. This one builds steadily toward the end. Then “Costanza” comes on strong, with an almost-angry, wild tone. This is the one song that wasn’t written just by the band. It is based on Charlie Feathers’ “Can’t Hardly Stand It,” but with some different lyrics. “You've got me all fucked up/I'm not letting it slide in the back of the truck/If you're hiccupping drunk and you're getting it stuck/In the muck and the mire in the thick of the brush/As if it's not vicious and wicked enough.” There is a heavy feel to the jam in the second half of the track. That’s followed by “Sweet Kid,” the album’s second instrumental track, which has a bit of a progressive rock sound and a cute ending.

With “Pick Of The Pugs,” a kind of goofy, delightful vibe is established immediately. This is an absolutely wonderful tune, another of my favorites (with an odd reference to The Beatles). And when the backing vocals echo the lead lines, I like the song even more. There is something totally adorable about this track. “It hit me like a brick in the guts/Stinking like a fifth on the bus/Oh my, mighty fine to be alive.”  That’s followed by another excellent track, “Hallway,” a twisted carnival ride of destruction and joy, featuring some great (and sometimes humorous) vocal work. This one has a few surprises up its sleeve as well. “Then it sunk in, you were gone too/And I’d have to fix it without you.” The album then concludes with “Reprise,” which is a reprise of “Bird Chirp,” but this time with a fun folk feel. “I’ll be fine/I’ll be fine by and by.”

CD Track List
Dear Bongo, is scheduled to be released on March 15, 2019. It is going to be available on record, CD and cassette (yes, that’s what I’m told). And the record release is going to be on yellow vinyl. I’m a sucker for colored vinyl, so I’m going to need to get a copy of that. I also need to pick up every other release this band has ever put out. Yes, these guys are that good. By the way, Motherhood will be touring the United States in March and April, so keep an eye out for them.
Posted by Michael Doherty at 2:46 PM