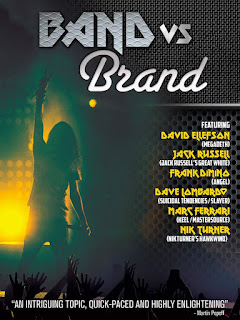 Band Vs. Brand is a documentary about the music industry in the digital age, particularly regarding how the brand of a band might now be more important than the actual members of the band. A somewhat depressing idea, but an intriguing film. Narration at the beginning mentions that the idea of branding is rather recent, that music companies in the sixties and seventies didn’t imagine a long-term future for their artists. “Little did they know that rock and roll icons such as Elvis, The Beatles and Led Zeppelin would outlive their active careers and their brands would become more profitable than ever before.”

Interestingly, record company executive David Tedds says that this question of branding is not new, that big bands continued long after their leaders died because of the brand, the name recognition. He also makes a point about doo-wop bands that would continue with only one original member, or even no original members. (I went to see one of those bands several years ago – I believe it was The Platters – and was shocked and infuriated to find no original members. I left after two songs.) Other music executives are interviewed in this film, as well as band managers and publicists. But most of the people interviewed are musicians. Though doo-wop and big band music are mentioned at the beginning, this documentary focuses on hard rock. Those interviewed include Nadir D’Priest (of London), David Ellefson (of Megadeth), David Lombardo (of Slayer), Marc Ferrari (of Keel) and Jack Russell (of Great White).

“I think the argument can be made that the brand is more important than the band,” says Marc Ferrari. Bands make more money merchandising their name than selling their records, and apparently the profit margin is greater on the sale of a T-shirt than a record. The documentary includes a segment on band logos, showing plenty of examples, most of which you’ll recognize even if you aren’t familiar with the music. The narrator says, “It is vital to own the trademark, and to establish an eye-catching logo to imprint on everything from T-shirts, baseball caps and stickers to alcoholic beverages, tattoos and condoms.” And yes, there are examples of all. “KISS Kondoms: Tongue Lubricated.” Really? Bloody hell. I have never been a fan of KISS, and this little bit of information certainly did not endear the band to me. The narrator goes on to say, “No artist in the history of music has capitalized on the business of branding more than KISS.” True.

Several of those interviewed also talk about classic rock bands now re-uniting without all the original members. They use Queen and Journey as examples of bands whose bodies of work are popular enough that they can tour without their famous lead singers. A connection is drawn to bands who changed singers rather early in the careers, such as Black Sabbath and AC/DC. But of course it’s not the same thing, since those bands didn’t actually break up. Journey and Queen got back together without key members to tour, seemingly to capitalize on nostalgia and on the popularity of the music. At what point does a band become a tribute to itself? Someone once said to me that the Rolling Stones have become the world’s best Rolling Stones cover band. And that rang true to me, that the Stones had long ago ceased being a creative entity and are simply cashing in on the love people have for what they once were. This documentary does delve into the question of tribute bands. I’ve never cared for tribute bands, because there is nothing remotely artistic or creative about what they do. It’s interesting to me that someone in this film indicates that occasionally tribute bands make more money than surviving members of the bands they’re covering.

The documentary is divided into different sections, and there is a section on how the internet has changed the music industry. Mike Varney (of Shrapnel Records) says, “When you do away with the labels, you do away with a lot of the quality control.” It is mentioned how the internet is allowing bands to exist without them having to put in the time on the road to learn, to establish themselves, to develop creatively. So the market is flooded with a lot of garbage. That is true. But there is a lot of really good music out there as well, from artists the big labels probably would not have risked taking on. The film also includes a section on touring. What is interesting is that it helps to keep any version of the band on the road, because that generates income even for the original members or their estates, as keeping the brand name in front of the people does lead to sales of albums and T-shirts and so on. Toward the end, something is mentioned that I had been happily been unaware of: bands performing with holograms of dead singers. That is completely insane.

Though a good deal of this documentary’s topic I found rather depressing, I was still completely engaged. It’s definitely worth checking out.

Band Vs. Brand was directed by Bob Nalbandian, and was released on DVD on February 12, 2018 through Cleopatra Entertainment and MVD Visual. The DVD includes two different trailers for the movie, as well trailers for a few other music documentaries.
Posted by Michael Doherty at 9:36 PM