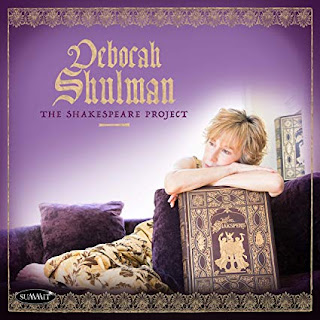 William Shakespeare is incontestably the greatest writer in the history of the English language. His impact on our culture is incalculable, not just in literature and theatre, but in our very speech and the phrases we use. There are numerous references to his work in novels, comic books, movies (I’m compiling a list of references in films for a future book), television shows and music. Several singers and songwriters have turned to Shakespeare’s works for inspiration, covering many of the songs included in his plays. In 2016, Paul Kelly released Seven Sonnets & A Song, an album of Shakespeare’s sonnets set to music. Now jazz vocalist Deborah Shulman gives us The Shakespeare Project, in which she sets not only some of the sonnets to music, but also some of the famous speeches. Plenty has been written about the rhythm and musicality of Shakespeare’s writing, so it is certainly not a stretch to turn these speeches to lyrics. Many of the tracks on this release were inspired by Shakespeare And All That Jazz, an album that was Cleo Laine released in 1964, with music composed by John Dankworth and Arthur Young. The arrangements for The Shakespeare Project are by Jeff Colella, who also plays piano. Also joining Deborah Shulman on this disc are Larry Koonse on guitar; Abraham Laboriel on bass; Chris Colangelo on bass; Joe La Barbera on drums; Kendall Kay on drums; Bob Sheppard on flute, saxophone and clarinet; and Bob McChesney on trombone.

Deborah Shulman opens the album with “All The World’s A Stage,” a track that sets part of Jaques’ famous speech from As You Like It to music. The first four lines are delivered, stopping before the seven ages of man. This is a thoughtful, rather mellow tune, featuring some nice work on keys. Then partway through, the music changes, becoming more peppy, and Deborah segues into the opening speech from Twelfth Night: “If music be the food of love, play on.” Unlike Jaques’ speech, Orsino’s entire opening speech is set to music here. The music changes again toward the end, returning to “All The World’s A Stage.” I like the guitar work at this point in the track. That’s followed by “Blow Blow Thou Winter Wind,” a song from As You Like It, sung by Amiens in Act II Scene vii. This track features some nice work by Kendall Kay on drums.

“Dunsinane Blues” is my favorite track on this album, turning Macbeth’s troubles into a totally delightful and kind of sexy jazz number. It opens with lines from the Third Apparition, promising Macbeth that he shall never be vanquished until Great Birnam Wood comes to Dunsinane. Hey, we’ve seen sexy versions of the three witches before, so there is some precedent for this. This song doesn’t just include the apparitions’ lines, but also those of the messenger who tells Macbeth he thought he saw the woods moving (and that coming just after Macbeth learned of his wife’s death – not a good time for him). Deborah gives an absolutely fantastic, joyful and playful vocal performance here, a big part of my love for this track. I also seriously dig the groove. And how cool is that section with just vocals and bass toward the end? This is one of the compositions performed on that 1964 album (someone needs to re-issue that Cleo Laine record).

We then get the first of the sonnets that Deborah performs on this album, Sonnet 18, here titled “Shall I Compare Thee To A Summer’s Day.” This is probably the most famous of all of the sonnets, and Deborah gives us a passionate reading of it. This track also features more excellent work on guitar that has an intimate, gentle sound. Deborah Shulman then turns to The Two Gentlemen Of Verona for the song “Who Is Silvia” from Act IV Scene ii. For some reason the track is titled “Who Is Sylvia,” though the lyrics in the liner notes give the correct spelling of Silvia.  Anyway, this one is delivered in a fairly straightforward manner, and is not expanded upon; it is the shortest track of the album. What I especially like about this track is that Deborah Shulman’s vocals are accompanied only by Abraham Laboriel on bass, giving it a cool vibe. From A Midsummer Night’s Dream, Deborah gives us “You Spotted Snakes,” a song the fairies sing in Act II scene ii. This is another mellow number, the music working well with the lyrics, which are essentially a lullaby to Titania. Bob Sheppard adds some nice work on both saxophone and clarinet.

The second sonnet presented on this wonderful album is Sonnet 30, “When To The Sessions Of Sweet Silent Thought,” this time Deborah’s voice supported by just piano. By the way, this is the sonnet that contains that great phrase, “death’s dateless night,” which was used as the title to Paul Kelly and Charlie Owen’s 2016 release. “Sigh No More Ladies” is a song from Much Ado About Nothing. Mumford & Sons used a couple of lines from it in their own song titled “Sigh No More.” In the play, Balthasar sings it. Here Deborah Shulman delivers a good, lively rendition, which moves along at a nice pace and features Bob McChesney on trombone. That’s followed by “O Mistress Mine,” a song from Twelfth Night that has been covered quite a bit. I really like the way Deborah Shulman approaches it, and this rendition features good work on piano and trombone. “Youth’s a stuff will not endure.” Ah, don’t we know it?

Deborah Shulman delivers two more sonnets, first Sonnet 147, “My Love Is As A Fever.” The music here has a more somber tone. That’s followed by Sonnet 40, “Take All My Loves.” Interestingly, she gives us a playful, fun, excited take on it. I really dig that instrumental section. The bass line is delicious, and I love the way the keys dance over it. Toward the end, there is a cool section of just drums and bass, where the bass is allowed to get a bit wild. Wonderful stuff. Deborah concludes the album, appropriately, with “Our Revels Now Are Ended,” from Prospero’s famous speech from The Tempest. This track has a pretty sound from the start, in large part because of Bob Sheppard’s work on flute. This song seems to tap into the magic of the play, even as Prospero is telling Ferdinand that it’s over, revealing it was all an illusion, and that life is fleeting. “We are such stuff/As dreams are made on, and our little life/Is rounded with a sleep.” But, ah, the magic continues, even as the song drifts off, as if to that sleep, and fades out.

CD Track List
The Shakespeare Project was released on February 22, 2019 on Summit Records.
Posted by Michael Doherty at 1:09 PM