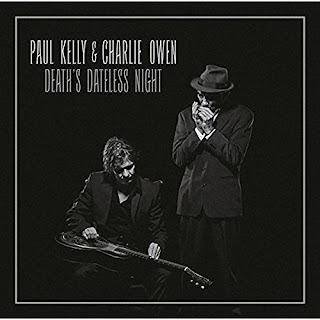 Paul Kelly continues to impress and move me, as well as surprise me, with each new release. His latest, a collaboration with Charlie Owen titled Death’s Dateless Night, features mostly covers of some well-known and beloved songs, plus a couple of originals. Even though the songs are mostly covers, the album has a very personal feel. The general atmosphere of this CD is comforting and friendly, and perhaps that’s due to the fact that these songs are all songs that Paul and Charlie have been asked to perform at funerals. That is their common link. An unusual concept for an album? Definitely. But this is Paul Kelly, who recently put out an album of Shakespeare’s sonnets. One of Shakespeare’s sonnets, by the way, Sonnet 30 (not one Paul included on that album), is printed in the liner notes of this CD. The last lines of that sonnet are: “But if the while I think on thee, dear friend,/All losses are restor’d and sorrows end.” And that really is the message and feel of this album.

They begin this album with “Hard Times” (often titled “Hard Times Come Again No More”), written by Stephen Foster. The arrangement is kept simple, with Paul on vocals and Charlie on piano. This arrangement invites the listener to sing along. “'Tis the song, the sigh of the weary/Hard Times, hard times, come again no more/Many days you have lingered around my cabin door/Oh, hard times come again no more.” It’s a beautiful opening to this album, and Paul and Charlie follow that with a Townes Van Zandt song, “To Live Is To Fly.” When I stop to count my blessings, I definitely number among them the fact that I did get to see Townes Van Zandt in concert. This is an excellent song, and I love this rendition. “Living's mostly wasting time/I'll waste my share of mine/But it never feels too good/So let's don't take too long/But you're soft as glass/I'm a gentle man/We got the sky to talk about/And the world to lie upon.” Charlie plays both dobro and piano on this track, while Paul is on guitar.

“Nukkanya” is one of the original compositions written by Paul Kelly. It was originally included on his 1994 album Wanted Man. This new version begins with a bit on harmonica, and features Charlie on dobro. Greg Walker joins them on harmony vocals. I actually like this version more than the original. There is something more intimate and sweet about it. This album’s other original tune is “Meet Me In The Middle Of The Air,” a song that was originally included on the 2005 release Foggy Highway. That earlier version was delivered a cappella, with Paul backed by The Stormwater Boys. On this new version, Paul’s vocals are accompanied by Charlie on dobro. It’s a gorgeous song, with lyrics partly inspired by Psalm 23. Compare Paul’s lines “I will lay you down in pastures green and fair/Every soul shall be restored” to these from the psalm, “He makes me to lie down in green pastures;/He leads me beside the still waters/He restores my soul.” Interestingly, the two original songs were both the closing tracks of the albums they earlier appeared on.

“Don’t Fence Me In” might seem like an odd choice of songs for this album, but the version here is sweet and gentle, with Charlie on lap steel and with backing vocals by Memphis and Maddy Kelly. And it actually quite quickly became one of my favorite tracks. It’s a delight. And it’s followed by a sweet rendition of Leonard Cohen’s “Bird On The Wire.” Leonard Cohen is the best songwriter, without question, and I’m always excited (though occasionally a bit nervous) to hear how other artists will interpret his material. Leonard Cohen has changed the lyrics to “Bird On The Wire” a bit over the years, but Paul and Charlie go back to the original set of lyrics, those heard on Songs From A Room. They do an excellent job, keeping it simple and serious. Paul is on guitar and Charlie is on piano. I love Paul’s vocals here. This is definitely one of the better covers of this song that I’ve heard.

Memphis and Maddy Kelly join Paul and Charlie again on “Let It Be,” and I think it’s their presence that helps make this rendition something special. I also really like the gentleness of the approach. Charlie plays synthesizer on this track. The CD then concludes with Hank Williams’ “Angel Of Death,” with Charlie on guitar. “When the angel of death comes down after you/Can you smile and say that you’ve been true/Can you truthfully say with your dying breath/That you're ready to meet the angel of death.”