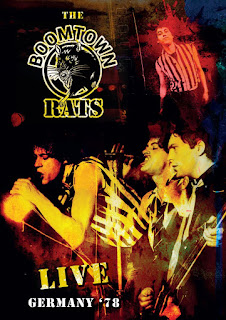 When I was in my early teens I bought The Fine Art Of Surfacing on cassette, after hearing “I Don’t Like Mondays” on the radio, The Boomtown Rats’ biggest hit, a song written after a sixteen-year-old girl fired a gun into an elementary school, killing two and injuring several others. It was right around the time that I bought that cassette that Bob Geldof recorded the Band Aid record, “Do They Know It’s Christmas?” and soon after that organized the Live Aid concert. But before Live Aid, before Band Aid, before Bob Geldof starred in Pink Floyd: The Wall, even before The Fine Art Of Surfacing, The Boomtown Rats put out their first two records, and it is from these two albums that most of the songs from Live Germany ’78 come. Gonzo Multimedia released this concert last year as a two-disc set, a DVD and CD, along with a booklet of photos and, interestingly, a copy of the tour contract rider.

The show was recorded at a fairly small venue, with the audience in the front seated around tables. I had listened to the CD first, and assumed from the energy of the music that the audience was dancing. Before they start the set, Bob Geldof tells the crowd: “This is the first time we’ve played in Germany. We did our record in Cologne, but this is the time we’ve played here.” The band then kicks off the set with “Close As You’ll Ever Be,” a tune from their self-titled debut record, and right away Bob comes alive, jumping off the stage and rushing at one of the cameras in the audience. He really plays to the cameras, even beckoning one of them to come closer at one point. But what’s up with that weird green light?

There is barely a pause after the first song before they go into “Never Bite The Hand That Feeds You.” The energy is fantastic. How is the crowd remaining so still? Maybe they were asked to, as this seems to have been filmed for a broadcast. In a couple of shots, you can see one of the cameras, and it looks like one of those large television cameras. And during “Neon Heart,” look at the guy in the front. He’s playing with a rat puppet or plush toy. Later you can see it on the table. Was that supplied by the band, or was that something that fans brought to shows?

In introducing “(It Feels) So Strange,” Bob says, “The next song is about when you wake up in the morning and you realize that you’ve just lost a war.” Check out the audience member in the black leather jacket. He looks so distrustful, so wary of what Bob might do next. Well, what he does next is introduce “Kicks” by telling the crowd, “In England, they think the next song is an excuse to kick people, especially the person beside you.” He also says the song’s title is “I Get My Kicks From You.” I like it when Bob tries to direct the camera, pointing at which band member should be featured in the shot, and then giving the camera man the thumbs up when he complies. Bob also interacts with some of the audience members, at one point asking: “What? Gabba gabba what?” That’s just before the band goes into “(She’s Gonna) Do You In,” one of the highlights of the set. Bob Geldof plays harmonica on that one.

This is a very energetic and totally enjoyable set. Even if you’re not familiar with the songs, you’re likely to enjoy this performance. The concert on the DVD is approximately fifty-one minutes, while on the CD it’s a few minutes shorter, as the song introductions are cut for some reason. The DVD includes two bonus songs: “Banana Republic” from a television appearance in November of 1980, and “House On Fire” from a television appearance in May of 1982. It’s difficult to tell if the band is really playing on these two songs or not. It seems like they are, but then often Bob doesn’t have the microphone anywhere near his mouth, and you can hear him just fine, which makes it seem like a pre-recorded track. And then it seems like the songs are fading out, but both times the picture cuts before we can really tell.