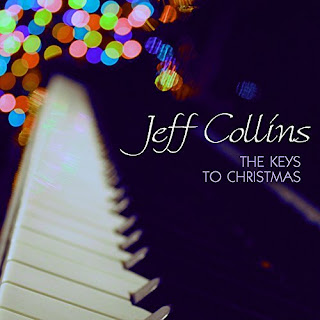 It’s that time of the year again, the time when you are legally bound to feel and express joy, the time when a simple trip to the store becomes a much dreaded ordeal, the time when a whole lot of Christmas albums are unleashed upon the public. Much of the music tied to this holiday is awful (check out my critique of “Rudolph The Red-Nosed Reindeer,” for example). But each year, some good Christmas CDs are released among the bunch. I tend in general to enjoy the instrumental albums more (because Christmas music contains some of the worst lyrics ever), and I’ve been digging a lot of pianist Jeff Collins’ new CD, The Keys To Christmas, an instrumental release containing some traditional Christmas fare as well as a few other songs associated with the season. This is actually Jeff Collins’ second CD of Christmas music, the first being Christmas Sessions. On this new one, he doesn’t repeat any of the material from the previous release. Here he is joined by some excellent musicians, including Tony Creasman on drums, Jeremy Medkiff on bass and guitar, Jason Webb on Hammond B3, Tim Surrett on bass, Roger Fortner on bass, David Johnson on guitar, Sam Levine on saxophone, David Davidson on violin, and Steve Patrick on flugelhorn and trumpet.

The Keys To Christmas opens with a medley of traditional Christmas songs: “Hark! The Herald Angels Sing,” “O Come, All Ye Faithful” and “Joy To The World.” And it’s a big production, with orchestral arrangement by Cody McVey. It comes on with a giant burst of energy before settling a bit, and at moments has the tone of a rousing musical production number. It’s a bit much, but things then become more relaxed for a sweet, romantic instrumental rendition of “Baby It’s Cold Outside,” always one of my favorite songs of the season, and one that is not strictly a Christmas tune. This is a nice version, and features Sam Levine on saxophone.

That’s followed by “The Man With The Bag,” originally titled “(Everybody’s Waiting For) The Man With The Bag,” a tune written by Irving Taylor, Dudley Brooks and Hal Stanley. This is a lively number, and a lot of fun, with a tone that is both playful and joyful. This is one of my favorite tracks from this CD, and one I’ll be adding to my holiday play list. It’s also a song that’s better as an instrumental, as it is presented here, than with its lyrics (“He’ll be here/With the answer to the prayers that you’ve made through the year/You’ll get yours/If you’ve done everything you should/Extra special good”). This version not only features some delightful stuff on piano, but also some great stuff on horns and percussion.

Another favorite is Vincent Guaraldi’s “Linus And Lucy,” a tune I am always happy to hear, regardless of the time of year. A Charlie Brown Christmas is far and away the best Christmas special ever to air on television, and in large part that is because of the music. This is a very cool rendition, with some nice touches and additions, including some good work on guitar at the end. The track fades out during that guitar part, and I actually wish it went on longer.

“Mary, Did You Know,” as originally recorded in 1991 by Michael English, is a song I don’t care for at all. It is certainly improved greatly by removing the lyrics and those terrible vocals. This version by Jeff Collins is a thoughtful meditation, featuring David Davidson on violin. It’s followed by a fun rendition of “Let It Snow, Let It Snow, Let It Snow,” with a surprising Latin rhythm which works quite well.

“What Are You Doing New Year’s Eve?” is another of this CD’s highlights. This is one that is obviously not a Christmas song, but rather a song appropriate to the season. It was written by Frank Loesser, and was a hit for The Orioles in 1949. Jeff Collins delivers a sweet, relaxing, pretty rendition. It’s one that will make you want to curl up with that special someone, preferably by candlelight, and hold him or her through the night. That’s followed by a kind of intense reading of “Carol Of The Bells,” with a sort of anxious vibe, at least at first. It then finds a cool, swinging groove, and I dig the bass, before getting intense again. If you are curled up with your loved one by candlelight, you might not want to let this track play directly following “What Are You Doing New Year’s Eve?” The CD then concludes with “O Come, O Come Emmanuel,” featuring beautiful work on strings.

CD Track List
The Keys To Christmas was released on October 7, 2016 on Crossroads Records.
Posted by Michael Doherty at 8:05 PM