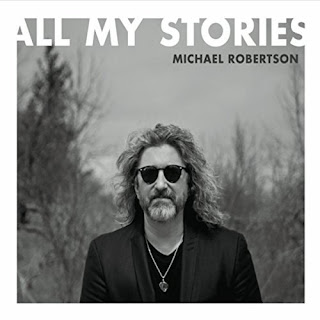 Michael Robertson has been making music for decades in various bands, including The Robertson Brothers Band, Maybe August, and Honesty And The Liars, all based in Michigan. He has now released his first solo album, All My Stories, featuring all original material. On this CD he plays guitar, lap steel and mandolin. Of course, it’s not exactly a solo album, as he is backed by many of the musicians from his other bands, including Scott Robertson, Honesty Elliott, Rosco Selley, Keith Carolan, Mike Thomas, Donny Brown and Andy Reed.

Michael Robertson kicks off the album with its title track, “All My Stories,” which has a sweet, positive country vibe, and a nice blending of male and female vocals. Here is a taste of the lyrics: “The voice outside sounds just like you/Saying some dreams do come true/And you know all my stories.” This is one of my favorites, and it leads straight into “The Highway Song,” a song I will be adding to my road trip play list. There is a powerful beauty to this song, tinged by a sadness that makes it all the more poignant, with lines like “All of my wishes didn’t get us too far.” I love that harmonica part halfway through. “Take your maps and the pictures and throw ‘em away/With the plans that you’ve made for the rest of your days.” Jim Alfredson plays organ on this track.

“And if I could just keep my tongue out of my cheek, I might not be condemned to eternal damnation” is a line that really stood out for me the first time I listened to this disc. It’s a great line from the beginning of “Sale On Salvation,” a song about people struggling with their various issues, a song with a sense of humor. “So he cashed in his pension/Drove to a place we can’t mention/And laid it all down on Red 44.” (Though maybe I’m mishearing that, because I don’t think roulette wheels go up that high. Maybe it’s supposed to be Red 34.) At the end, Michael sings a bit of “Amen,” that song made popular by The Impressions. Jim Alfredson plays organ, and Bill Silverthorn plays drums on this track. This is a song that Michael has performed with Maybe August, and that band also included the “Amen” section.

“It’s Not What You Think” is one of the most interesting songs on this release. It begins like a dirty limerick, “There once was a man from Nantucket...”  But when we expect a certain rhyme, Michael surprises by instead singing, “One day he woke up and said… funny how there’s no one to blame.” And while there are other humorous lines and wordplay, the sound of this song is rather serious, pensive, melancholy. “It is what it is, it’s not what you think.” There is some wonderful stuff on guitar during the instrumental section in the second half of the song. Ryan Fitzgerald plays bass and Mike McHenry plays drums on this track.

“Blame It On You” is kind of catchy and has something of a 1970s vibe, particularly that guitar part. And check out these lyrics: “But I don’t know which me I’m supposed to be/And it takes too long to get from your head to some place I understand/It takes too long to heal the wounds from the holes in your hands/It takes too long to get down off of this mountain where you stand/Maybe I’ll just turn and walk away like I don’t give a damn/And blame it on you.” This is another of my favorites.

The album concludes with an acoustic version of its title track, which is quite pretty. I think I actually prefer this version. “Take me now for what I am.”