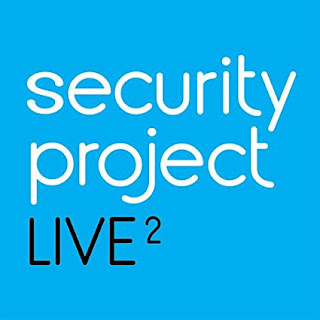 Earlier this year Security Project released Live 1, an album of Peter Gabriel material. They’ve now followed it with Live 2, with performances of more Peter Gabriel and Genesis songs. On lead vocals and acoustic guitar is Brian Cummins, and his voice possesses many of the same qualities as Peter Gabriel’s voice. But his performances feel honest, nuanced and full of passion (check out “Wallflower,” for example), rather than simple imitations. Peter Gabriel fans will certainly enjoy this CD, as it gives us a chance to revisit some of Peter Gabriel’s material we might not have listened to in a while. After all, the song selections don’t include big hits like “Shock The Monkey,” “In Your Eyes,” “Sledgehammer,” “Big Time” or “Red Rain.”

Security Project, in addition to Cummins, features Michael Cozzi on guitar and backing vocals, David Jameson on keyboards and Eigenharp, Trey Gunn (from King Crimson) on guitar and vocals, and Jerry Marotta on drums and backing vocals. (Jerry Marotta played drums on several Peter Gabriel recordings, including one of my favorites, that great self-titled 1980 release with “Games Without Frontiers.”) The recordings on this CD are from February and March of 2015, as well as May of 2016. At times I forget this is a live album. First of all, it’s a very good, clear recording. But also, there is nothing messy about these tracks; these are polished performances. And there isn’t much stage banter included, with the focus being on the material.

This CD opens with “Family Snapshot,” a song from that 1980 self-title record. (The first four Peter Gabriel solo albums are all self-titled.) This rendition by Security Project features a really good vocal performance. Near the end, the vocals are delivered nearly a cappella, and those moments are compelling, and will certainly draw you in. That’s followed by “Moribund The Burgermeister,” which is the opening track from what is arguably Peter Gabriel’s best album, the self-titled one from 1977, his first solo record. (It’s the album that also features “Solsbury Hill.”) As with the original, this one features a great, kind of creepy voice on the line, “But I will find out, I will find out, I will find out.” I love it. Also from that album is “Humdrum.”

From what is still probably Peter Gabriel’s most popular album, So, comes “Mercy Street.” (I’m glad Security Project didn’t choose “Sledgehammer” or “Big Time,” two songs I never cared for.) In one of the CD’s few bits of stage banter, the band introduces this song, “This is from me to you, and it proves everybody deserves just a little bit of mercy.” The band delivers a delicate, moving rendition, which is actually quite a bit different from Peter Gabriel’s original version. It’s also somewhat shorter.

While the majority of these tracks are from early in Peter Gabriel’s solo career, Security Project does cover “Father, Son,” from Gabriel’s 2000 release OVO. Then, interestingly, they reach much farther back in Gabriel’s career to his time with Genesis, covering two songs from the 1974 record The Lamb Lies Down On Broadway. They do the first two songs from this double album – the title track and “Fly On A Windshield.” The CD then concludes with “On The Air,” the first tune from Peter Gabriel’s second self-titled album. The audience clearly knows the song, as you can hear them echo “On the air” – one of the only moments when the audience plays a key part in the recording.