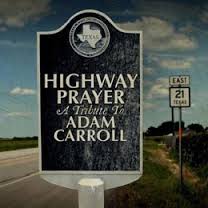 Adam Carroll is a talented and respected singer and songwriter based in Texas. He’s released several CDs over the past fifteen or so years, and his songs have been covered by other singer/songwriters. Highway Prayer: A Tribute To Adam Carroll features an excellent line-up of artists, including James McMurtry, Slaid Cleaves and Band Of Heathens, playing songs that Carroll wrote. I’m actually more familiar with some of these artists than I am with Adam Carroll’s own recordings. And, in part because of this, I realize that this CD could work well as an introduction to the songwriter’s material. Interestingly, each of the artists on this CD introduces the song he or she is covering, often simply stating the song’s title, which is also in itself a little tribute to the songwriter, as Adam Carroll does the same thing on some of his own albums. Most of the folks on this album are, like Adam Carroll, based in Texas, and they let these songs speak for themselves, delivering heartfelt renditions without adding anything unnecessary. Every one of these songs has lines that will stand out, such as “My only luxuries are my memories/And they make room for my dreams” from “South Of Town” and “Waiting in the dark/For anything that shines” from “Rain.” The CD also includes a song by Adam Carroll at the end. And why not? It’s like the guest of honor being given a chance to speak. Seems right to me.

James McMurtry kicks off the CD with a cover of “Screen Door,” the song that opens Adam Carroll’s 2000 release Lookin’ Out The Screen Door. James McMurtry is such a great songwriter and storyteller, and it’s clear here that he can convince you of a character’s truth even if he didn’t write the tale. Joining James McMurtry on this recording are Cornbread on bass and Daren Hess on drums. That’s followed by the closing number from Lookin’ Out The Screen Door, “Girl With The Dirty Hair,” here performed by Hayes Carll. Hayes Carll had previously recorded Adam Carroll’s “Take Me Away,” including it on his Little Rock album. He does a really good job with “Girl With The Dirty Hair,” though oddly changes the opening line to “Scarface in the corner, he’s stumbling for a fight” (the original is “looking for a fight”). I love the weary quality to his delivery, which works perfectly.

Slaid Cleaves chooses “South Of Town,” the title track to Adam Carroll’s 2001 release, and delivers a good version. Slaid sings, “You can think of me in terms of how it used to be/But you’ll never hear me complain.” The original line is “You can think of me in terms of your memories.” Both lines are actually really good, and also effective. This isn’t the first time that Slaid Cleaves has covered Adam Carroll’s material. He included a rendition of “Racecar Joe” on his 2006 release Unsung. Then Band Of Heathens does a wonderful version of “Oklahoma Gypsy Shuffler,” a perfect choice for this band. As I mentioned earlier, these songs all have lines that stand out. The ones from this song that caught me my first time listening to this disc were “He did it with a guitar late into the night/Trying to live just like the songs that he would write.” By the way, Adam Carroll had co-written “Maple Tears,” a song on The Band Of Heathens’ 2008 self-titled release.

You probably know Jamie Lin Wilson (and her own songwriting abilities) from her work with The Trishas. She also released her debut solo album last year, Holidays & Wedding Rings. On this tribute album, she covers Adam Carroll’s “Hi Fi Love” (here titled “Hi-Fi Love”). This song certainly contains some surprising lines, surprising rhymes, particularly these: “But I just can’t get enough/Of your old French ticklers, no one in particulars/And your sundown hi-fi love.” I love the way Jamie Lin Wilson delivers those lines. (And the last line of this song makes me laugh.) She is joined on this track by Lloyd Maines. Lloyd Maines also joins Verlon Thompson on the cover of “Lil' Runaway,” a song from Adam Carroll’s 2014 release, Let It Choose You. Verlon Thompson is a songwriter whose own material has been covered by many artists over the years, including Guy Clark, Sam Bush, Trisha Yearwood and Kenny Rogers. On “Lil’ Runaway,” he follows Adam’s near-spoken word vocal delivery. This track also features Diana Burgess on cello, an instrument I always appreciate. The last line of this song is “Come on back and make it rain.” It is then followed by Scott Nolan’s rendition of “Rain,” a nice touch. BettySoo, of Charlie Faye & The Fayettes joins Scott Nolan on vocals. Scott Nolan was featured on a track of Carroll’s Old Town Rock ‘N’ Roll album, the CD most covered on this tribute.

Some of the best guitar work on this CD is by Matt The Electrician on his excellent rendition of “Old Town Rock ‘N’ Roll.” He is joined by Rich Richards on percussion, and by Curtis McMurtry (James McMurtry’s son) on banjo. One of the lines from “Smoky Mountain Taxi” that stood out for me was “He was hitting on a waitress with a good set of teeth.” Banjo player Danny Barnes delivers a really good version of that song on this CD. He plays both banjo and guitar, and is joined by Lloyd Maines on mandolin. The other line that caught me the first time I put this disc on was “I heard more bluegrass music than I wanted to hear.” Danny Barnes’ rendition has more of a bluegrass feel all the way through, even before that great, fast section at the end. That ending section in this version has a different sound, as from an old recording.

Noel McKay and Brennen Leigh’s rendition of “Karaoke Cowboy” has a different feel from Adam Carroll’s original from the Lookin’ Out The Screen Door album. It has an appropriate country bar vibe, and features Lloyd Maines on pedal steel and Jeff Plankenhorn on dobro. That is followed by one of my favorites, Mando Saenz’s version of “Home Again.” “I see his name in everyone/Just like I see myself.” These lines also stand out for me: “Old times always stay the same/And brand-new days are strange/But you never lose yourself/And all you do is change.” Walt Wilkins delivers an earnest rendition of “Highway Prayer,” the song chosen as the title for this collection. Walt is joined by Lloyd Maines on pedal steel and Diana Burgess on cello, while BettySoo provides harmony vocals on this track.

This CD concludes with a new Adam Carroll song, “My Only Good Shirt” (and yes, he does introduce it). Interestingly, this song is actually a tribute of sorts to Lloyd Maines (and his shirt). “I’m a long way from my roots/I’ve still got sand in my boots/They call me the spiritual kind/And they say this shirt’s damaged goods/And I’d trade it in if I could.”

CD Track List
Highway Prayer: A Tribute To Adam Carroll is scheduled to be released on October 28, 2016 on Eight 30 Records.
Posted by Michael Doherty at 6:20 PM