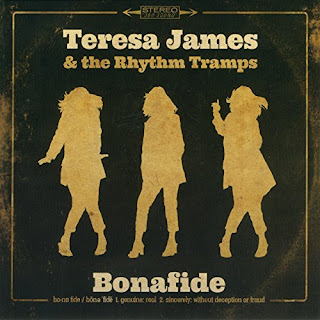 Teresa James And The Rhythm Tramps are a cool blues band based in Los Angeles (though Teresa James is originally from Houston), and have released several albums over the past fifteen years or so. Their new one, Bonafide, features mostly original material written by bass player Terry Wilson. It follows the band’s 2012 release, Come On Home. The Rhythm Tramps have gone through a lot of configurations over the years, and the lineup for this release is Terry Wilson on bass, guitar, organ, percussion and backing vocals; Billy Watts on guitar and backing vocals; Red Young on organ; Mike Finnegan on organ and piano; Phil Parlapiano on piano; Lewis Stephens on piano and organ; Tony Braunagel on drums; Jay Bellarose on drums and percussion; Jim Christie on drums; Herman Matthews on drums; Lee Thornburg on trumpet; Darrell Leonard on horns; Mark Pender on horns; Ron Dziubla on saxophone; Sean Holt on saxophone; Jerry Peterson on saxophone; Richard Wedler on bowed saw; and Greg Sutton on vocals. And of course at the heart of this recording is Teresa James on lead vocals and piano. Her voice is one of those delicious blues voices that can get rough and raw when necessary, but also can soothe and woo you if she so desires.

Teresa James And The Rhythm Tramps kick off this CD with a great cover of The “5” Royales’ “I Like It Like That,” a song written by Lowman Pauling and originally released in 1954 as the flip side to “Cry Some More.” Oh yes, back to the roots of rock with some excellent rhythm and blues. And just listen to the way Teresa delivers the lines, “Well, me and my baby fuss and fight/And then we get together, make love all night.”  Wonderful! Plus, she delivers some delightful stuff on piano. I am always a sucker for that kind of playing; it works for me every time. This is one of only two covers on this release.

They follow that with the CD’s title track, “Bonafide,” a blues tune with a cool, quirky rhythm. In this song, she is taking charge, and her vocals leave no question about it. “I got your bags all packed out on the front lawn.” She’s determined to get her life together – something we’re all attempting, right? Perhaps this song will help. Just turn it up and get to work. “Spit It Out” is another cool blues tune, with some nice touches on horns by Darrell Leonard. “I’m just saying what’s on my mind/Trying to get close to you is sure taking some time/I ain’t complaining, just telling it like it is.” Horns also add to the great vibe on “The Power Of Need.” This time Mark Pender and Ron Dziubla are on horns. I really like Teresa James’ vocal performance here, both powerful and intimate.

Then “Hollywood Way” shows something of a playful side that I appreciate, with that great pause in the line “You might catch it on You Tube… eventually,” and a bit of a funky edge. This song also contains a reference to The Picture Of Dorian Gray, as the dream in Los Angeles is of not aging. Just have your image captured by the camera, and in a way you never do age. There is the play on the meaning of “Way” here, as both method and the street that leads to the Burbank airport. And how literal is she when she sings, “We’re all on shaky ground”? That playful sense is also prominent in the following track, “My God Is Better Than Yours,” which has the positive message that we shouldn’t let religions divide us, that the fighting between religious groups is insane. I particularly like these lines: “A thousand years later came the Crusades/Now two thousand years, no progress made.” No kidding! I also really like the backing vocals by Terry Wilson and Billy Watts: “Oh no, no, no, you’re wrong again.”

My favorite track is “You Always Pick Me Up.” I love the classic, powerful feel of this song. It features another excellent vocal performance by Teresa James, and also some great stuff from Ron Dziubla on saxophone and Lee Thornburg on trumpet. “You had dreams you could remember/Oh, where did they go/Another place, another time/Baby, we’ll never know.” I love this song, and I can’t believe it hasn’t been a part of my life for years already. It has that feel, you know?

I hate the marketing slogan “What happens in Vegas stays in Vegas,” which seems designed to appeal to the worst aspects of human nature, encouraging people to cheat and then keep it secret, while of course spending plenty of money. Part of it is that I despise Las Vegas, which I think exists solely by appealing to those worst elements inside of all of us. So I have a bit of trouble getting into “What Happens In Vegas,” though the song seems to be a warning of sorts (“You’d better watch out, there ain’t no doubt/You’re going to lose your honey if you lose your money”), and features some nice work on piano by Mike Finnigan.

One of this CD’s highlights is “No Regrets,” another with that great, old feel, a thoughtful song of passion and love. “Love seems to come so easily to you.” Plus, there is some really nice playing by Sean Holt on saxophone, as well as great stuff on keys. The CD concludes with its second cover, John Hiatt’s “Have A Little Faith In Me.” It’s interesting that Teresa James And The Rhythm Tramps decided to begin and end the album with covers. This is such a beautiful song, and certainly not a bad choice with which to end the album. I love the way Teresa delivers these lines: “When your back’s against the wall/Just turn around, just turn around and you will see/I will catch you, I will always catch your fall/All you got to do is have a little faith in me.” Jerry Peterson plays saxophone on this track.