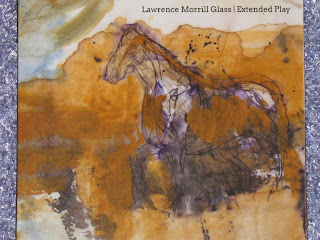 Lawrence Morrill Glass is a singer and songwriter based in Austin, Texas. His new EP, the appropriately titled Extended Play, features all original material, written or co-written by Lawrence Morrill Glass. This EP is a taste of his upcoming full-length release, Neanderthal. Joining him on this CD are folks like Marty Muse, Johnny Dango and Son Volt’s Andrew Duplantis.

It’s the end of October, and so just about time for the annual onslaught of Christmas albums. Because of that, some might actually read a jolly note of optimism in the opening track’s title, “No Christmas This Year.” But this is actually a sweet and sad tune about being lonely on the holiday and lacking the necessary cheer, but going about the routine by habit. “Cut the wood to build a fire/But it doesn’t seem to warm me now/Nothing matters anyhow.” Lawrence’s vocal delivery is perfect; it’s emotional, but turned inward, so without overtly seeking sympathy from the listener. And that makes us feel it all the more, the sadness and confusion of having lost one’s love. He looks back with some fondness, even losing himself in the past for a moment (that section of the song is happier, and he sounds more excited – a nice touch), but sees no joy in the present. And the past is intangible. “Now it’s all, it’s all a dream.”

That is followed by “Mary Contrary,” a somewhat goofy and strange pop song in which Lawrence sings, “I like Katie/Katie really hates me/It only makes me/Wish that she were mine.” Something about the vocal line reminds of mid-1960s rock music, bringing to mind bands like The Lovin’ Spoonful. Yeah, it’s fairly catchy, and I find myself digging it. This might actually be my favorite track. “The Habit Of You” is more standard fare, co-written by James Stevens and Lawrence Morrill Glass, but I really like the main lines, “I’ve got the habit of dreaming/The habit of you.”

The last time I watched Saturday Night Live, Tina Fey was still a cast member. She was a reason to watch the show. On this CD, Lawrence Morrill Glass delivers a love letter to the comedian in the song “Tina Fey.” Hey, who isn’t in love with her? She is both funny and sexy, a rare and very desirable combination. This song also touches on the problems of being in love with someone who is more fantasy than reality, how crushes on celebrities, even ones who come across as intelligent as Tina Fey does, are rather sad. “No, no, not another Saturday night with a TV screen/What a lonely life, what an empty dream/I can't go on this way/With nothing left to say/But I love Tina Fey.”

The EP concludes with “Californ-i-a,” a song about going astray. Some good lyrics are what make me interested in this one. Lines like “Then years got away from me/I was otherwise occupied/You see, I’m mad and melancholy/But she kept me satisfied” and “For why she gave up on our romance/And gave me back my name” are particularly good.

CD Track List
Extended Play is scheduled to be released on October 30, 2016.
Posted by Michael Doherty at 10:28 PM