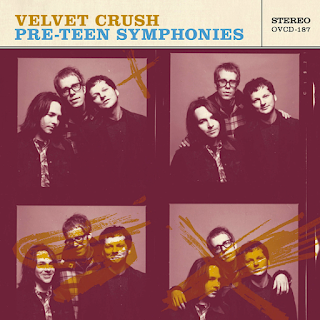 Velvet Crush is a rock band from Providence, Rhode Island, getting its start in 1989, and releasing its first full-length album in 1991. Probably Velvet Crush’s most popular album is Teenage Symphonies To God, released in 1994. Leading up to that album, the band recorded some demos, which are included on Pre-Teen Symphonies, along with some live tracks from November 1994. These tracks were previously available on the band’s own label, Action Musick, on Melody Freaks and Rock Concert. Now they’re available to a wider audience through this new compilation by Omnivore Recordings, with liner notes by drummer Ric Menck. Most of the songs were written by the band’s three members, Paul Chastain, Jeffrey Underhill and Ric Menck.

The first eight tracks of this compilation were previously included on Melody Freaks. These are demos of songs which, in large part, would end up on Teenage Symphonies To God. The disc opens with “Hold Me Up,” which would be the lead-off track on that album, and would also be released as a single. It’s a good, solid tune, with lines like “Time down the road/Nothing much to show/Suffer as the days/Linger on and on/Miles and miles away/You hold me up when I'm gone.” That’s followed by “My Blank Pages,” which also follows it on Teenage Symphonies To God. The lines that always stick out for me are “All I do, all I say, never close enough/All I do, all I know, doesn’t mean that much.” (Interestingly, those lines would be changed slightly on the album to “All I think, all I say, never close enough/All I know, all I do doesn’t mean that much.”)

“Time Wraps Around You” has a mellower, sweeter sound, and is one of my favorite tracks. This song would also be included on Teenage Symphonies To God. “This time wraps around you/And I'll wrap around you/You know I'll stay.”

“Turn Down” is one of only two songs on this CD not written by the band. It was written by Darren Cooper and originally recorded by his band, Three Hour Tour, and included on the Valentine’s Day seven-inch. It’s one of those positive, peppy-sounding pop songs, with the line “We’ll take something bad and turn it around.” And it works. I was in kind of a shitty mood the first time I put this disc on, and this track brought a smile to my face.  Of course, it’s followed by a song titled “This Life Is Killing Me,” a harder, rawer rock number that seemed more fitting to my mood that night with lines like “It's your saving grace, but it's not saving me” and “I can’t go out, the sky is closing in on me.”

There is a bit of 1960s jangly folk-pop to the sound of “Weird Summer,” another tune that would be included on Teenage Symphonies To God. It’s one of those tunes you can’t help but like. “Star Trip” kicks right in, without that intro on the album version. By the way, joining the band on the Melody Freaks tracks are Phil Hurley on guitar, Mike Deneen on keyboards, Mitch Easter on guitar and David Gibbs on backing vocals.

The second half of this disc is from a concert the band did in Chicago in November 1994, and features live versions of some of the songs from the first half of the CD. These tracks were previously released as Rock Concert. The first track is “Window To The World,” an energetic rock number with plenty of guitar. Tommy Keene had joined the band at this point, adding another guitar and voice. This song was the lead-off track to the band’s first full-length release, In The Presence Of Greatness. It’s followed by “My Blank Pages,” with the lyrics to those lines I mentioned earlier delivered as they are on the album.

Also from In The Presence Of Greatness they do “Ash And Earth,” but most of the songs are from Teenage Symphonies To God, including “Time Wraps Around You,” an energetic rendition of “Atmosphere,” “This Life I Killing Me” and “Hold Me Up.” This CD ends with its second cover, “Remember The Lightning,” written by Ron Flynt and originally recorded by 20/20, included on that band’s first album. Velvet Crush does a really good, fun rendition. There isn’t much stage banter between songs, just some thanks and very brief song introductions (like “This song is called ‘Atmosphere’”).