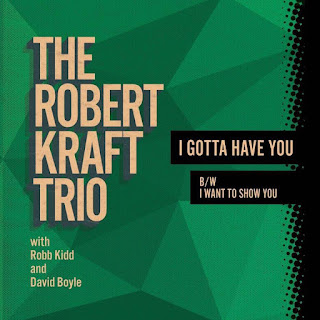 The Robert Kraft Trio is composed of Robert Kraft on vocals, JD Pendley on guitar, and Lindsay Greene on bass and backing vocals. They are based in Austin, where they have a Friday evening residency at the Continental Club Gallery, a spot they’ve held for something like five years. From what I can gather, their sets are dominated by cool, relaxed covers of songs like “Witchcraft,” “Crazy Heart” and “Lilac Wine.” But for their new single (out on vinyl), they’ve chosen two original compositions, both written by Robert Kraft: “I Gotta Have You” and “I Want To Show You.” Joining the trio on this release are Robb Kidd on drums and percussion, and David Boyle on organ. David Boyle also produced the record.

“I Gotta Have You” (sometimes titled “Gotta Have You”) is a groovy tune about wanting to yield to that “sweet temptation.” “Just a little flirting/I don’t see what it’s hurting/There’s something shining in your eyes/I’ve got to have you.” Those smooth vocals by Robert Kraft make doing the wrong thing sound so right. This song features some nice work on organ, and also a good lead part on guitar.

The flip side, “I Want To Show You,” is a somewhat livelier number, its sound seeming to be influenced by both classic R&B and 1970s vibes. It has a bright, happy feel. “When the last light of the day/Turns to blue and fades away/I want to call you, I want to tell you, I want to show you.” Though, as the song goes on, we learn that he can’t share these things with that special someone, for an undisclosed reason. “Share all the pretty things with no one else but you/And even though it can’t be so/I want to show you.” I like that the reason isn’t made clear, as it allows the listener to perhaps connect more easily with the song, plug in his or her own reasons.

This single is available on vinyl now. Apparently, a full-length album is in the works, so we should be hearing more from this trio soon.

Posted by Michael Doherty at 1:11 PM