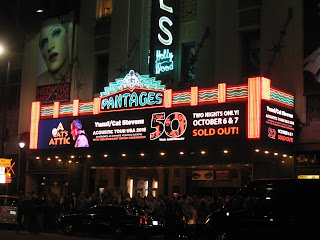 Three films had a huge impact on me during my childhood. Star Wars made me love movies; Time Bandits made me appreciate movies; Harold And Maude made me love and appreciate life. You can probably guess which of those three became my favorite film. A big part of that movie and its impact was the music by Cat Stevens. A soundtrack wasn’t available, so I bought several Cat Stevens albums and put together my own soundtrack on a Maxell cassette, and in the process became a huge fan of Cat Stevens’ work. Of course, I was already familiar with “Morning Has Broken,” “Moonshadow” (which I learned at camp), and “Peace Train.” Those are all good songs, but my favorites were “Trouble,” “I Think I See The Light” and “Tuesday’s Dead,” among others.

Well, last night I finally got to see Yusuf/Cat Stevens in concert. He did the first of a two-night run at Pantages Theatre in Hollywood to conclude his “A Cat’s Attic” fiftieth anniversary tour. When I arrived a little after 6:30 p.m., there was a line around the block, which surprised me, as L.A. people are generally not early arrivers. But the line moved quickly, and soon I was inside. The music that played over the speakers before the show included some Cat Stevens songs, such as “Kitty” and “The Laughing Apple,” and also, interestingly, included that section from Tchaikovsky’s “Piano Concerto No. 1” that plays in Harold And Maude when Harold’s mother goes for a swim in the pool. What a nice touch, and a treat for those Harold And Maude fans who arrived early. Most people, however, did not arrive early, or even on time. The concert was scheduled to start at 8 o’clock, and at 8:08 there was an announcement that due to trouble getting everyone in, the show would start at 8:30 p.m.

Right at 8:30, Cat Stevens took the stage, beginning the show solo with “Where Do The Children Play?” Partway through the song, the curtain was lifted to reveal his band: Eric Appapoulay on guitar and Kwame Yaboah on bass and percussion. It also revealed the set, which was an attic at night, a bright moon above. He followed “Where Do The Children Play?” with “Don’t Be Shy,” one of two songs specifically written for Harold And Maude, and then talked a bit about the set. “This is London, back in the ‘50s and ‘60s. It’s where I grew up.” The set had a relaxed and inviting, even warm, vibe about it. Cat mentioned how in his youth he wanted to be an artist (you can see some of his artwork on his album covers), and about loving West Side Story, particularly for Natalie Wood. He then did a cover of that musical’s “Somewhere,” which he performed solo. He followed that with just a bit of The Beatles’ “From Me To You,” also solo, but stopped and actually put on the record of that song for a moment, which was a little odd.

The band returned during “Here Comes My Baby,” and Cat Stevens changed the line “You’re forever talking on the phone” to “You’re forever texting on the phone,” which got a laugh from the crowd. At this point, the last people were still arriving and finding their seats. Come on, Los Angeles, you can arrive on time like the rest of the planet!

The first version of “The First Cut Is The Deepest” that I ever heard was Rod Stewart’s, which was a big hit in the 1970s. It wasn’t until recently that I finally purchased Cat Stevens’ New Masters, the 1967 album that features that track. And of course I love Cat Stevens’ version. He played it last night, and followed it with a couple of songs from Matthew & Son, his first full-length album. Eric switched to electric guitar for both songs, and that instrument sort of overpowered Cat Stevens at moments during “I Love My Dog.” (Yusuf/Cat Stevens said it was the “funky version.”) Eric switched back to the acoustic guitar for “Northern Wind,” another tune from New Masters.

After “A Bad Night,” Cat Stevens talked about collapsing and about contracting tuberculosis, which led to a turning point in his career and life. That led to my favorite song, “Trouble,” a song which always makes me cry, even when I’m just at home listening to the CD. So of course this wonderful live performance quickly had me in tears. It was the first, but not last, song of the concert that brought tears to my eyes. He then did “Katmandu” solo, which was also great. He switched to a black acoustic guitar for “I Wish, I Wish,” another of my favorites, and then introduced the band, saying that Eric was on guitar and Kwame was “on everything else.” He ended the first set with two more songs I love: “Miles From Nowhere” and “On The Road To Find Out,” both from Tea For The Tillerman. He was basically going in chronological order (obviously, with some deviations), sharing stories and songs from his career and life. The first set ended at 9:25 p.m.

When he returned to the stage at 9:45 p.m. for the second set, he entered through the window of the attic set while a recording of “Tea For The Tillerman” played. (It’s a very short song, and it’s another that was featured in Harold And Maude.) He then sat at the piano for “Sad Lisa.” Before the show, I had met some of the folks seated near me, including a woman named Lisa, who told me that a relative of hers had once pointed out the song to her, saying the title was like her. And between sets, a guy I’ve worked with, who happened to be seated two rows behind me, mentioned he hoped to hear “Sad Lisa.” So the energy around me when the second set started was pretty good. If you include the recording of “Tea For The Tillerman,” then eight of the eleven tracks from that album were played at the concert. I was surprised he didn’t play “Hard Headed Woman,” but was really happy to hear “Into White.” And when he started “Father And Son,” suddenly everyone’s phones and cameras came out to capture the moment. And yes, this was another song that brought tears to my eyes. How could I help it?

Folks sang along with “Moonshadow,” a song I was taught by camp counselors at Project Adventure in Massachusetts when I was eight years old. They also taught us Joni Mitchell’s “The Circle Game.” Perhaps it’s telling that I have no clear memories of any of the activities, just the music they played for us in the evenings. Right before the end of “How Can I Tell You,” there was this delicate, vulnerable moment in Cat’s vocals that nearly made me cry. He returned to the piano for “Sitting,” a powerful song from Catch Bull At Four. After sipping from a cup, he made this observation: “American tea is not the same as British tea.” He introduced “Boy With A Moon & Star On His Head” by saying none of it really happened. The line “And love is all he said” got a big cheer. This was a really great crowd, by the way. They were very appreciative and respectful, and totally into every moment of the show. It’s a joy to attend a concert with folks like that.

“I’m going to skip Foreigner because it’s just so complicated,” Yusuf/Cat said before going into “Oh Very Young,” a song from Buddha And The Chocolate Box (and also included on Greatest Hits). And then from Numbers he played “Novim’s Nightmare.” Though he didn’t talk quite as much during the second set as the first, he did tell us about a near-death experience in the ocean in Malibu, a story which led to a cover of “People Get Ready” and then “Be What You Must,” from Roadsinger. (He didn’t play anything from either Izitso or Back To Earth.) He did talk a bit about people’s reactions to his religious conversion, saying he felt rejected, and so he walked away from it all. He then played “Roadsinger,” and followed that with “If You Want To Sing Out, Sing Out,” the other song specially written for Harold And Maude.

From An Other Cup, he played “Maybe There’s A World,” leading directly to a bit of The Beatles’ “All You Need Is Love.” The second set concluded with “Peace Train.”

Chris Cornell joined Cat Stevens on backing vocals for “Wild World,” the first song of the encore, a song that got the audience to its feet. (For those who might not recognize his name, Chris Cornell is a member of Soundgarden and Audioslave.) That was followed by “Another Saturday Night,” with, as Cat Stevens mentioned, “slightly adjusted” lyrics, such as “Another fellow told me he had a business that looked just fine” and “I got no money ‘cause I ain’t got paid.” He then played “Mona Bone Jakon,” which was great. Afterward he said, “Don’t ask me what it means.” Folks shouted out various requests. One guy near me shouted, “Tuesday’s Dead,” but Yusuf responded that it had too many chords. I would have loved to hear that one. Instead, he played “Morning Has Broken,” which during the set break the woman next to me had said was her favorite. Kwame moved to keys for that one. And that was the last song of the night. The show ended at 11:05 p.m.

Encore
Here are a few photos from the show:

This was one of those magical nights. I spoke with several people after the show, and everyone had basically the same reaction. If he tours again, I would definitely want to go see him again. It would just be a question of affording the tickets. By the way, a portion of the price for each ticket went to charity.

The Pantages Theatre is located at 6233 Hollywood Blvd. in Los Angeles, California.
Posted by Michael Doherty at 3:37 AM