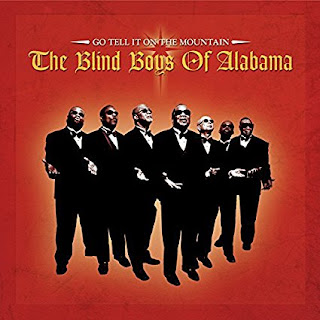 This year’s batch of Christmas releases and re-issues includes a special expanded edition of The Blind Boys Of Alabama’s 2003 holiday album, Go Tell It On The Mountain. If anyone can make Christmas sound both cool and holy, you know it’s The Blind Boys Of Alabama. Plus, on this release they are joined by some great guests, including Solomon Burke, Tom Waits, Chrissie Hynde, Richard Thompson, Aaron Neville, Mavis Staples and George Clinton. Most of the songs are ones you know well, but don’t worry, there is no “Rudolph” or “Frosty” or any of that junk. The Blind Boys Of Alabama, at the time of this recording, featured founding members Clarence Fountain, Jimmy Carter and George Scott, as well as Joey Williams, Ricky McKinnie, Bobby Butler and Tracy Pierce. This expanded edition includes three bonus tracks and new liner notes.

They get things off to a great start with a lively rendition of “Last Month Of The Year,” featuring some good work by John Medeski on organ. The song begins a cappella, which of course is the perfect way to begin any Blind Boys disc. What excellent voices! The band then kicks in, and things get hopping. Has Christmas ever sounded so good? They follow that with “I Pray On Christmas,” a song written by Harry Connick, Jr. and included on his When My Heart Finds Christmas album. So this was a recent song, only a decade old when The Blind Boys Of Alabama released their rendition. This version begins with some cool work on bass by Danny Thompson, and features a fantastic vocal performance by Solomon Burke. There is also more wonderful stuff from John Medeski on organ.

Tom Waits then joins the group for the CD’s title track, “Go Tell It On The Mountain.” The Blind Boys Of Alabama had covered Tom Waits previously, opening their 2001 release Spirit Of The Century with his “Jesus Gonna Be Here.” Here he adds his distinctive, wild, rough vocals to this special, bluesy rendition of the spiritual. I especially dig that section that begins with Tom Waits singing, “Now, people, when I was a seeker…” That’s followed by “Little Drummer Boy,” one of the popular Christmas songs that I’ve actually always enjoyed (in part because when I was nine or so, Joan Jett released a great version of it). The Blind Boys Of Alabama offer an interesting version, featuring a spoken word delivery by Michael Franti, with the Blind Boys echoing him in song. It’s quite different from other versions I’ve heard over the years, but I like it. By the way, Michael Jerome is on drums.

Chrissie Hynde takes on lead vocal duties on “In The Bleak Midwinter,” a song that might not be as familiar as most others offered here. Here is a taste of the lyrics: “In the bleak midwinter/Frosty wind made moan/Earth stood hard as iron/Water like a stone/Snow had fallen, snow on snow/More than you could know/In the bleak midwinter/A long, long time ago.” Richard Thompson plays guitar on this track. That is followed by a delicious a cappella rendition of “Joy To The World,” with Aaron Neville’s lead vocals working in wonderful contrast to The Blind Boys.

Mavis Staples joins the group on “Born In Bethlehem,” a song that The Staple Singers included on their 1961 record Swing Low. The version included here has a great, positive energy, and a good groove to get you moving. It’s loose and fun, like a gospel party, and has a cute moment at the very end. Then country singer Shelby Lynne joins them for “The Christmas Song,” written by Mel Tormé and Robert Wells. It is presented as a duet with Shelby and Clarence Fountain. By the way, in 2010 Shelby Lynne released her own Christmas album, titled Merry Christmas (it does not include “The Christmas Song”).

George Clinton, the Prime Minster of Funk, joins the Blind Boys on “Away In A Manger.” That might sound like a very strange choice, but the result is the best version of this song I’ve ever heard (at least, that I can recall). Guest musician Robert Randolph is on pedal steel. Then Meshell Ndegeocello is on lead vocals and piano on “O Come All Ye Faithful,” here titled “Oh Come All Ye Faithful.” As with “Little Drummer Boy,” the lead vocals are delivered as spoken word. Les McCann is on vocals and piano on Irving Berlin’s “White Christmas,” the first half of which is delivered as scat, the lyrics not being sung until close to the two-minute mark. The original album concludes with a wonderful version of “Silent Night,” without any special guest vocalists. Clarence Fountain takes lead vocal duties.

CD Track List
This special expanded edition of Go Tell It On The Mountain is scheduled to be released on November 4, 2016 through Omnivore Recordings.
Posted by Michael Doherty at 4:38 PM