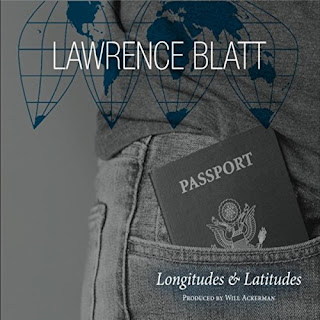 I think it would be great to be able to travel over the entire world (well, there are a few places I would avoid), but sometimes traveling in our minds is the most we can manage. And that’s not so bad, particularly when the method of transportation is vibrant and interesting music. The new album from guitarist Lawrence Blatt, Longitudes & Latitudes, features mostly original material that Blatt wrote in various locations all over the planet. In the liner notes, he includes not only the name of the town where each piece was composed, but its longitude and latitude position. And these tunes do vary in style and feel, as influenced by – and perhaps evocative of – the places where they were composed. So each track is like a journey in itself. Some journeys are jubilant, like “I.M.A.,” others more meditative, like “The Places Left Behind.” Lawrence Blatt is joined by several talented musicians on this release, including Kelly Park on piano, Sam Bevan on bass and Jeff Haynes on percussion.

Lawrence Blatt opens the album with “Two Shades Of Sunshine,” a tune written in Makawao, Hawaii. As you might expect, this track has something of a relaxed and pleasant feel, though the alto saxophone rises high above the groove. That’s Premik Russell Tubbs on sax. “Two Shades Of Sunshine” is followed by the CD’s title track, “Longitudes And Latitudes,” the only track for which Lawrence does not give a specific location. Rather, he simply states “World” as the place where this one was composed. (No one can argue with the accuracy of that.) This one too has a relaxing feel, and is dominated by guitars, though at one point approximately halfway through the percussion takes prominence (and why not, as that’s Jeff Haynes on percussion). Will Ackerman, who produced the album, joins Lawrence on guitar.

Florence is a place I would love to visit, and it’s where Lawrence Blatt wrote “A Place In Your Heart,” a sweet and romantic tune that is like a magical and comforting breeze gently lifting us and carrying us away. “Hyde Park Bench” then just as gently brings us back down to Earth. As you probably figured from the title, this one was composed in London (though I suppose you might have guessed Los Angeles or Chicago or even – dear lord – Utah). This is a sort of duet with guitar and saxophone, and is quite pretty.

On “Two Steps Down The Line,” a tune written in Blatt’s hometown, San Francisco, Lawrence plays synthesizer as well as guitar, and Melecio Magdaluyo joins the band on alto saxophone. That track is followed by one of my favorites, “I.M.A.” (which stands for Indianapolis Museum of Art, where it was written). This track is an energizing, uplifting and pleasant journey, featuring Premik Russell Tubbs on woodwind. I love the joy to the music. Marc Shulman is on electric guitar, Sam Bevan on bass and Jeff Haynes on percussion. “Upon Griffy Lake” is the only track on this album to include vocals. That is, there is a voice, but no lyrics, and so without words, that voice is actually less constrained in expressing a joy, and there is a sense of freedom to the vocals. Blatt didn’t move all that far from the Indianapolis Museum of Art for this one, as the Griffy Lake Nature Preserve is located in Bloomington, just slightly southwest of Indianapolis. That’s Noah Wilding on vocals, by the way. Also joining Blatt on this track is Eugene Friesen on cello, an instrument I always appreciate.

My absolute favorite track on this disc is “Noches De Barcelona,” which not only features some wonderful work on guitar, but also some excellent playing on violin by both Charlie Bisharat and Lila Sklar. This tune is fun and beautiful, and switches gears partway through, going in a delightful new direction, with the violins really being the focus. And then there are some great touches from the horn section of Jeff Oster on trumpet and Jim Rothermel on alto saxophone. What more could you ask for? It’s followed by another of the CD’s highlights, “Flying Over Elis Island.” (No, I’m not sure why Ellis Island is spelled with just one l.) It eases in with some pretty work on guitar by Lawrence Blatt. Blatt is then joined by Charlie Bisharat on violin before the song kicks in to become a happy, bright number. Jim Rothermel adds some wonderful stuff on clarinet. And check out that bass by Sam Bevan.

This album concludes with a sweet, delicate rendition of “Over The Rainbow,” delivered on ukulele by Lawrence Blatt like a lullaby. This is the only song on the album that wasn’t written by Lawrence Blatt, but he does give a location for its composition: Lawrence, Kansas. This is a playful choice on his part, as the song was written in Los Angeles, though both songwriters – Harold Arlen and E.Y. Harburg – were originally from the state of New York.