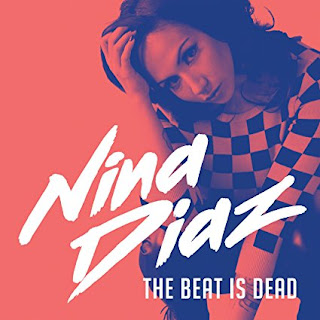 Nina Diaz is the singer and guitarist of Girl In A Coma, a great trio from San Antonio, Texas. The band has put out a few full-length CDs, as well as some singles and EPs, and has supported folks like Morrissey and The Pogues on tour. And now Nina Diaz is releasing her first solo album, The Beat Is Dead, featuring all original material. On this one, she not only provides the vocals and plays guitar and keyboards, but also bass on certain tracks. She is joined by David Garza and Patricio Dávila, with other guests on a few tracks.

She kicks off the album with “Trick Candle,” which begins with a solid dance beat from Patricio Dávila, then kicks in to become a fun, lively song, driven by Nina’s commanding vocals. “I wait a while/I’ll bring it back/I think I’m in style/Then again, I am like a child/When I sing.” This is a great track to get things going. Nina Diaz follows that with “Queen Beats King,” which has something of a delicious 1980s pop vibe (due mainly to Nina’s work on keys). This is the song that gives the CD its title, in the line “And the beat is dead.” This tune features some seriously good lyrics, including these lines that stand out for me each time through: “It was over with one last kiss/One that you’ll never miss.” And check out these lines: “Trust what you feel/’Cause when you breathe in the silence/You create your own violence/To turn and kill and kill.” This is one of several favorites of mine.

“Rebirth” is another favorite. This powerful song was released in September, and it’s one of the tunes that cemented my interest in this CD. It’s an incredibly cool tune with a fantastic vocal performance by Nina Diaz. I can’t get enough of this song, and I’m guessing I’ll be far from alone on that. “I’m back from the dead/Like I told you, friend/I will not love you until you are my enemy.” Patricio Dávila provides some backing vocals on this one. “Rebirth” is followed by “January 9th,” which is the first song I heard from this CD, and is the song that got me really excited about this release. I’m loving it even more now, in large part because of Nina’s incredible vocal performance, which I find more impressive each time I hear this song. It’s her voice that really drives this one. “Every time I try to find another place to stay/Every time I try to look away, I seem to cave/In the back of the mind, in the back of my mind/Every time I try to look away I scream your name.” On this track, Nina is joined by Travis Vela on guitar and Emily Booher on cello. And yes, the presence of the cello adds to the song’s beauty, and helps make it one of the best songs of the year. (Emily Booher also plays cello on “Dig.”)

“Fall In Love” has a catchy rhythm and is something of a glorious pop song. “Here I am/I am the voice that plagues you/Although you look the other way.” I also really like this line: “Last act, but not the final scene.” “It” is a harder song with a steady beat. I particularly like the way sometimes Nina’s vocals rise above that beat, and at other times are almost part of it. “Down” is like punk-dance, and is a whole lot of fun. On this track, Nina is joined by Travis Vela on guitar, Austin Valentine on bass, Jorge Gonzalez on drums, Priscilla Iree on keys, and Jaime Ramirez on keys and backing vocals. “I know all your secrets/I will push you to the ground/And you say oh, why you kick me while I’m down.”

CD Track List
The Beat Is Dead is scheduled to be released on October 28, 2016 on Cosmica Records.
Posted by Michael Doherty at 2:33 PM