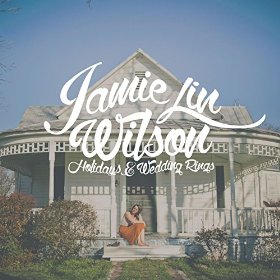 Jamie Lin Wilson is known for her work as a member of The Trishas, a band of four female singer/songwriters, all with gorgeous voices. I was turned on to The Trishas in 2012, and their High, Wide & Handsome  made it to my list of favorite CDs of that year. Then in 2014, band member Kelly Mickwee released her debut solo album, You Used To Live Here. Now, while the band is on a break, Jamie Lin Wilson has released her debut full-length solo album, Holidays & Wedding Rings. This CD features all original material, written or co-written by Jamie Wilson, with some really good lyrics. For example, check out these lines to “Just Some Things”: “Throw it all away for a kiss filled with regret/It’s like running for the edge and thinking you’ll fly/Knowing damn well that it’s suicide/And there ain’t no grey, only white and black/And there’s just some things you can’t take back.” It surprises me that people still – as someone did to me the other night – make blanket statements against country music. It’s clear that they haven’t heard discs like this one, which mixes country and folk. If you know somebody like that, let him or her hear this CD.

This CD opens with “Just Like Heartache,” a really good, upbeat country tune with an excellent chorus: “Oh, ain’t it just like heartache/To be something that you can’t shake/With just any old lover/Oh, I don’t want to be lonely/Do you think that you could hold me/Until the worst is over.” Wonderful, right? This song was written by Jamie Lin Wilson and Mike Ethan Messick. It’s followed by “She’ll Take Tonight,” a more relaxed song, with a cool vibe. This one is about a woman looking for love, and finding it any way she can. “She’s hoping for a kinder and a gentle man.” The lines that really strike me are: “She’ll believe you, because she needs to/Even if it’s all a lie/She’s hoping for tomorrow, but she’ll take tonight.” “She’ll Take Tonight” was written by Jamie Wilson and Dani Flowers.

One of my favorites is “Just Some Things.” This is one of the best songs about cheating – or the contemplation thereof – that I’ve ever heard. It’s performed as a duet with Wade Bowen, who wrote the song with Jamie Wilson, and told from the perspectives of a man and a woman who are about to be unfaithful with each other. It’s beautiful and sad and sweet. “Is it too late for me to change my mind/Because there’s just some things you can’t turn back.”

Another favorite is “Roses By The Dozen,” which Jamie Wilson wrote with Heather Morgan. I just love the overall feel of this song. It has a very cool, kind of twisted and haunting vibe. And like all of the tracks on this CD, it features some excellent lyrics. Here are the opening lines: “You thought you’d get the last word/But I got there first/And you don’t have much to say now, now, now, now.” And I love the idea of “pushing up roses by the dozen,” a play on the idea of pushing up daisies. This is such a good song.

I’m also really fond of “Seven Year Drought,” a song that Jamie Wilson wrote with Jon Dee Graham. Of course, living in Los Angeles these days, anything about a drought carries some weight. Check out these lines: “And we’re six years into a seven year drought/I won’t give in but I’m bound to give out/You can’t eat hope and you can’t drink doubt/Six years into a seven year drought.” But it’s Jamie Wilson’s work on harmonica that really helps to make this track a highlight.

Then Scott Davis’ work on banjo gives “Yours And Mine” a sweet, playful feel right from its start. This love song has such a great, positive vibe. And I dig the lap steel (which is also played by Scott Davis). “Here Tonight” is a truly pretty song that Jamie Wilson wrote with Owen Temple. “I don’t need your sympathy/But I’d sure like your company today/So just sit here and talk to me/Because I believe I have to go away.” It ends with these powerful lines: “Did you hear, at the end you see a light/Well, my dear, I can see it here tonight."