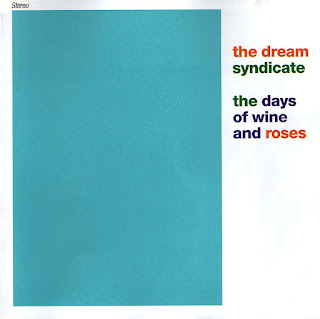 The Days Of Wine And Roses was the first full-length album from The Dream Syndicate, originally released in 1982.  It’s a fantastic album, coming at a pivotal time in music, when dance-pop was about to take over, and punk and rock seemed to take a back seat. So The Days Of Wine And Roses was unlike most of the other albums of the time. Obviously, the Velvet Underground had a big influence on this band, which you can hear in the general sound and vocal approach, but The Dream Syndicate carved its own path. The Days Of Wine And Roses features some of my favorite Dream Syndicate tunes, like “That’s What You Always Say” and “Halloween.” Certain lines stand out for me on this album, like “And it seems like the end of the world/When you smile.” This album has been out of print for a while now, which is nearly criminal. But Omnivore Recordings is releasing a new edition, with several previously unreleased bonus tracks, and new liner notes. The liner notes include thoughts on the album and on the band by Nigel Cross, Byron Coley, Matt Piucci, Tom Stevens, Bill See, Dan Stuart, Gary Stewart, Chris Morris, Steve Shelley, Ella (of Ella And The Blacks) and Pat Thomas. The bonus tracks are all rehearsal recordings, so they have a deliciously raw sound. Fans of the band should be pleased. This album has aged really well; that is to say, it hasn’t aged at all. It still sounds fresh and exciting.

The album opens with “Tell Me When It’s Over.” Here is a taste of the lyrics, written by Steve Wynn, “And I really don't know/'Cause I don't wanna know/Yeah, tell me when it's over/Tell me when it's over/Oh, let me know when it's done.” Steve certainly sounds like Lou Reed on this track. It’s a really good song, but I think the following tune, “Definitely Clean,” is even better. It has a good, steady beat, some wonderful guitars, and a kind of serious yet playful vocal delivery. “I'm just standing here waiting/For you to come clean/I'm just standing here waiting/For you to come clean/I'd ask you what you want/But I don't think you'd know what I mean.”

“That’s What You Always Say” is one of my personal favorites. Right from its opening, it grabs me every time. I love that bass line, I love the beat, I love when the guitars come bursting in. It’s just a perfect song. And there is something of a sense of humor in the lyrics: “I try to sit and talk with you/But you know how our moods change all the time/I try to wait a week or two/But by then I'll probably change my mind.” The entire album is really strong, but even among excellent tracks, this one is a stand-out.

“Halloween” is another favorite, this one written by Karl Precoda. Halloween is the best holiday, and this song should certainly be on your holiday playlist. I love the way the somewhat relaxed vocals work in conjunction with the loud guitars, creating a cool, unusual vibe. And then there is that wonderful change nearly three minutes into the tune for that instrumental section, which might actually be my favorite part of the song. It becomes a great jam. Here is a taste of the lyrics: “And you're gonna be mine/On Halloween/He says you shouldn't believe the things in papers/They can't come true/And don't believe the things that you see on TV/’Cause they'll never happen to you/No, no, not on Halloween.”

“Too Little, Too Late” features Kendra Smith on lead vocals. Kendra would leave the band the following year and then play with Rainy Day and Opal. I wish she had recorded more with The Dream Syndicate, because “Too Little, Too Late” is another of the album’s highlights, in large part because of her vocals. The original album then concludes with its title track, yet one more excellent song. “The priest from the parish is looking for persuasion/The man with the notepad wants verification/Somebody says this was my creation/Everybody says I don’t care, no, I don’t care.” This one turns into a nice, loud punk jam (if such a thing is possible).

This CD contains six bonus tracks, all of which were previously unreleased. These are rehearsal recordings, all from 1982.  The first, “Is It Rolling, Bob,” is from December 9th of that year, and is a short instrumental track. Also from that same rehearsal comes “A Reason.” It has a different feel, and I like it, though I do wish the vocals were a little louder because it’s difficult to make out some of the lyrics.

Even more exciting are the two tracks from a rehearsal held on December 27, 1982. Both of these songs – “Still Holding On To You” and “Armed With An Empty Gun” – would end up on the band’s 1984 release, Medicine Show. But here are early rehearsals of the songs while Kendra was still a member of the band. There is a bit of banter before they begin the great, raw rendition of “Still Holding On To You,” and more banter at the end, with Kendra asking, “What’s that one called?” This version of “Armed With An Empty Gun” is a loud, forceful, energetic take, without the piano of the album version.

The bonus tracks also include a tune titled “Like Mary,” from a rehearsal on February 24, 1982. After a brief bit of banter, the song begins with a kind of trippy vibe before kicking in. This is a seriously good song, and pretty damn catchy, and I wonder why the band didn't return to it later. This CD then concludes with “Outside The Dream Syndicate,” a nice long jam from a rehearsal in January of 1982.