The Dream Syndicate: “The Day Before Wine And Roses” (2014) CD Review 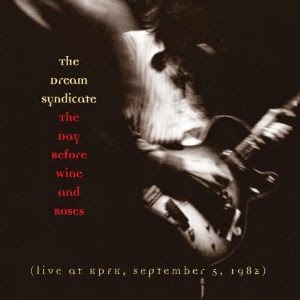 The Dream Syndicate hadn’t been together all that long when they performed this late-night set on KPFK in Los Angeles. The Day Before Wine And Roses was recorded on September 5, 1982, and is a great mix of originals (including an early version of “John Coltrane Stereo Blues,” here still titled “Open Hour”) and covers (you have to hear their nice, long version of Donovan’s “Season Of The Witch”). The originals are mostly from their EP, but also a couple of songs that would be recorded for their first full-length album, Days Of Wine And Roses. There is approximately an hour of music here, performed with a great, loose vibe.

The Day Before Wine And Roses was released twenty years ago in Germany, and this new issue includes those original liner notes by Pat Thomas (with a new comment on them by Pat), as well as new notes by Steve Wynn.

At the beginning of this CD, Andrea ‘Enthal introduces the band, and there are jokes about the show being a “fireside chat.” Steve Wynn sets the scene by describing the studio and the audience (“some on the floor, some sitting in chairs”) and even the photographer’s tripod. It’s great to have a sense of what it was like to actually be there. The band then gets things going with “Some Kinda Itch,” a deliciously mellow tune that has a great late 1960s feel – think Jefferson Airplane, The Doors, Velvet Underground – and I absolutely fucking love it.

They follow that with a cool, heavy cover of Buffalo Springfield’s “Mr. Soul.” At the end, someone shouts out, “Louder.” The response: “We don’t play loud music.”

But then they go into a ripping rendition of “Sure Thing,” with the guitars coming at full force at moments, and the vocals matching that power. The song gets quiet at one point – “Listen” – but it feels like a monster waiting, ready to pounce on its prey. It’s tense, and they keep that going for a while before tearing in again.

I totally love the stage banter that’s included in this release. They talk about the new album, which they hadn’t yet recorded, and about milking the EP, before going into “That’s What You Always Say” (a song that was included on both the EP and that first album).

The Dream Syndicate delivers a great, raw and insanely energetic cover of Bob Dylan’s “Outlaw Blues,” from Bringing It All Back Home. Afterwards the band jokes that they’re going to do that whole album, but they’ve forgotten which album it’s actually from, and say it’s from Highway 61 Revisited. They say they’ll next do “Queen Jane Approximately,” which is from Highway 61 Revisited. Someone then requests “In-A-Gadda-Da-Vida” and they start to play a little of it.

But what they go into is “Open Hour,” which would later become “John Coltrane Stereo Blues.” According to Steve Wynn’s liner notes, this is the first time the band ever played the song. But after the song, they say it’s the third time it was played. Either way, this is a very early recording of the tune, and it features a very good jam. Oh yes, “It’s gonna be all right.”

“Season Of The Witch”

I love Donovan, and “Season Of The Witch” has always worked for me. The Dream Syndicate does a wild rendition of this song, with some interesting things on guitar. This song slowly stalks you, creeping up and then playing with you a bit before devouring you. The song becomes a crazy jam, with sudden screams toward the end. It’s more than eight minutes long, and absolutely delicious.

They then play what would be the title track of their first full-length record (after joking about looking for a label), “The Days Of Wine And Roses.” And it’s a fantastic version, full of energy. At the end, Steve says, “Thanks a lot, that was a lot of fun.” Indeed.

The Day Before Wine And Roses was released on February 4, 2014 through Omnivore Recordings.

Posted by Michael Doherty at 5:14 PM