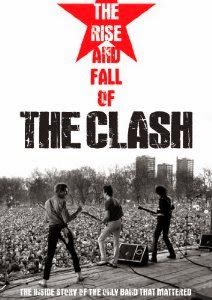 I still remember when I was a kid buying that first Clash album. It was on cassette, and was the American version, so it had “I Fought The Law,” which in fact might have been the only song on it I’d heard before I made my purchase. And something certainly changed for me when I popped that cassette into my stereo for the first time. This was one of those albums that had an immediate and lasting impact. But I never bothered to learn anything whatsoever about the band. Maybe I didn’t want to know. But now I do.

The Rise And Fall Of The Clash, the new documentary film about the band, features a new interview with Mick Jones, and surprisingly opens with a quoted passage from Shakespeare: “Be not afraid of greatness: some are born great, some achieve greatness and others have greatness thrust upon them.” Of course, those lines are given in jest in the play, Twelfth Night, as part of a prank on Malvolio. And perhaps that is the spirit it is offered here, for the music of The Clash did have a certain sense of humor.

The Rise And Fall Of The Clash has some concert footage and does discuss certain songs, but it’s really about the relationships of the band members to each other, and the relationship of the band with its manager, Bernard Rhodes. This documentary should be titled simply The Fall Of The Clash, for it has basically no information whatsoever on the formation of the band or its early years. This film focuses on the years 1981 – 1985, when most of the band’s greatest music had already been released, and it really centers on the influence of band manager Bernard Rhodes, which led slowly but inevitably to the band’s destruction. Rhodes managed the band from 1976 to 1978, and then again from 1981 through 1985. It is this second period that is the subject of this film.

As much as I would have loved to learn some things about the band’s early development, what the film does give us is interesting. There is quite a bit about Combat Rock, which they recorded in 1981 and released in 1982. It was the first album they recorded after Bernie’s return as manager, and the band tried to mix the album themselves late at night after gigs. The results weren’t that good, so the duties went to Glyn Johns, who quickly mixed the album.

The film also focuses on the dismissal of drummer Topper Headon because of his excessive drug use, and the return of Terry Chimes. But of course the biggest issue is the increasing tension between Joe Strummer and Mick Jones, eventually leading to the sacking of Jones. All of this coincided with the band’s increasing popularity and their performing shows in much larger venues.

There is some live footage of the band performing “Should I Stay Or Should I Go,” but I would have liked a bit more concert footage. There is also some footage of the film Joe made in 1983.

There are interviews with Clash security man Ray Jordan. And perhaps even more interesting are the interviews with all of the band members who came late in the game. Pete Howard was the drummer from 1983 through 1985, and his interview provides a different perspective on what the band had become. He says, “I was into prog rock and Yes and Genesis and stuff, which is something I never told them in the interview.” And regarding the firing of Mick Jones, Pete says: “Joe rang me and he said, ‘I’ve got rid of that wanker. Are you with me or are you with him?’” He also talks about how in 1984 there were new rules about drug use and about what band members could and couldn’t wear.

There are also interviews with guitarists Nick Sheppard and Vince White, who both were replacements for Mick Jones, playing in the band from 1983 through 1985. Each of them thought he was going to be the main guitarist and didn’t know about the other at first. This is stuff that I knew nothing about before this documentary, and for me is actually the most interesting material. Nick, Vince and Pete were not treated well, and were basically seen as hired hands, with low salaries.

This documentary also delivers quite a bit of information regarding that final studio release, Cut The Crap (an album I never bothered to pick up). It’s great hearing Pete’s bitter take on the use of a drum machine on that album.

The Rise And Fall Of The Clash was directed by Danny Garcia. It is scheduled to be released on DVD on April 29, 2014 through Shout! Factory. The DVD contains no special features.

Posted by Michael Doherty at 10:46 PM