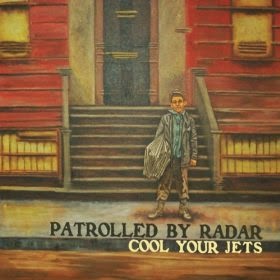 Patrolled By Radar is one of the best Los Angeles bands going these days. They sound like the greatest bar band ever, except that they also write damned good lyrics. They mix rock, folk and country elements, and on their new release, Cool Your Jets, dip a bit into pop on certain tracks.

One thing I love about this band is its sense of humor. It’s kind of dry, and it’s often there at the heart of songs rather than as silliness on the surface. It’s inherent in the perspective. Lead singer Jay Souza’s voice has this delightful weariness which works well against the inherent comedy in many of their songs, in lines like “I live above a dry cleaner to the stars” in “Grain Of Sand,” which for me adds to the humor.

All but one of the songs on Cool Your Jets are originals, written by Jay Souza.

The album’s opening track, “Died With Money,” is told from the perspective of a person who died with money. It’s a mid-tempo rock tune, and is wonderfully absurd, especially as it’s sung with a sort of weary pride. Even after death, he’s not quite prepared to admit to anything wrong in his goals and approach to life, but there is something in the vocal delivery which betrays him. “I never felt the need to get along/I may now be in flames/But I died with money.” There’s a short instrumental section that has elements of a ‘60s pop song (this section repeats just before the end).

“Grain Of Sand” features the lines, “I make plenty of green/at the village idiot bar/I live above a dry cleaner/to the stars.” That line makes me laugh every time, but it is far from this song’s only humorous lyric. These are the song’s opening lines: “Mental illness doesn't run in your family/It crawls quietly.” This one has something of a delightful pop vibe.

“Rally” is a song that gets in my head a lot. I saw them perform it in concert, and it pops in my head often enough that I was under the impression that it had been included on an earlier release (it wasn’t). The lines that I absolutely love are these: “It’s not the end of the world/It’s just the end of the day.” Sometimes we need a reminder, eh? I love this song.

“Lost Cause” opens with a spoken word intro, as by an old-time DJ at a dance hall or on the radio: “And now, friends, here’s an old favorite melody...” Then surprisingly this one has more of a raw and energetic rock vibe. This is a song that demands to be turned up. This song also provides the CD with its title in its opening lines: “Keep your shirt on/Cool your jets/You've been running fast enough/Ain't seen nothing yet.” And I totally dig these lines: “Anybody can sing/Sing a hallelujah.”

“El Norte” begins with a softer, acoustic instrumental section, and has kind of a sweet, pretty vibe. And lines like: “You know the pure will kill you if you stay/Send us money from the U.S.A./Take your broken heart to El Norte.” It then slowly builds into a kind of wonderful rock tune. “I miss you mama/You told me I should go.” Part of it is sung in Spanish.

“Hate Talkin’” is a song you might already be familiar with. A video for this song was released last year, featuring the band at Cinema Bar, an incredibly small bar in Culver City that is actually a great place to catch live music. “Hate Talkin’” is a catchy country rock tune that will get you smiling. It starts as a series of insults which are funny, but where the song really grabs me is when Jay sings, “But wait I'm not through/I really hate talkin’ to you.” Those lines are so great, because clearly the person being insulted is walking away, ending the conversation, and the singer calls him back just to tell him he’s not enjoying the conversation. It’s wonderful. I also like these lines: “If you should reproduce/It would be child abuse/I say spare us your offspring.” And: “I wish you the worst.” The backing vocals echoing the title are a nice touch.

"Do You Know A Love Song"

“Do You Know A Love Song” is my favorite track, and not just because of the addition of accordion (that’s Jason Eoff on accordion). This is just an overall very cool tune. I love the vibe. Plus, there are some wonderful backing vocals by Annette Summersett (she had also joined the band on Be Happy). Here is a taste of the lyrics: “Don't say you weren't cryin’/You know I could hear you/On the last day of summer/I want to be near you/This world's changing form/How will we ever keep warm/Do you know a love song/Do you know a love song/There's got to be/one we can sing/when we can't get along.” Wonderful, right?

Cool Your Jets ends with its sole cover, a nice rendition of Randy Newman’s “Ghosts” (a song that Randy Newman included on his 1979 release, Born Again).  While Randy Newman's version was basically vocals and piano, this version by Patrolled By Radar is a full band affair, and it's seriously good. It has that great mixture of humor and despair that Randy Newman was so great at creating before he sold his soul to Disney. “I don’t want to be all alone anymore/I’m sorry.”

Patrolled By Radar is Jay Souza on vocals and guitar, Bosco Sheff on guitar, Preston Mann on organ and piano, Ben Johnsen on drums and vocals, and Peter Curry on bass.


Cool Your Jets is scheduled for an official release of May 1, 2014. But if you live in Los Angeles, you have a chance to hear these songs earlier. Patrolled By Radar is doing a special record release concert at Three Of Clubs in Los Angeles on April 24, 2014.

Posted by Michael Doherty at 12:14 AM