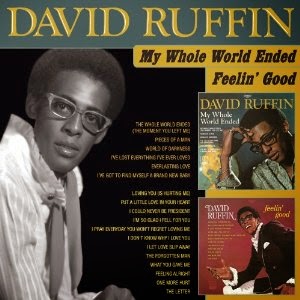 I don’t think I’ve ever met anyone who didn’t like The Temptations. I’ve met people who told me they don’t like The Beatles (something I can’t understand), but never The Temptations. David Ruffin provided lead vocals on many of that band’s biggest hits and most loved tunes, such as “My Girl,” “Ain’t Too Proud To Beg” and “I Wish It Would Rain.” But by mid-1968, he was out of the band and soon pursuing a solo career. (He would later rejoin The Temptations, and then leave them again.) His first two solo albums, My Whole World Ended and Feelin’ Good (both originally released in 1969), have now been released on a single CD.

There is so much heartache in these songs, so many troubles, and David Ruffin has the perfect voice to express them. The opening line of “I’ve Got To Find Myself A Brand New Baby” is “The love I thought would never die came to a certain end.” And that is typical of the lyrics found on these tracks. Yet, this is far from a depressing CD. It’s like David Ruffin suffers so we don’t have to. These two albums actually have a lot of positive vibes (check out "I Could Never Be President"). And in a song like “My Love Is Growing Stronger,” things actually seem to going well. “Each time I hold you close, it seems to make me strong.”

“My Whole World Ended (The Moment You Left Me)”

The CD kicks off with the title track of the first album, “My Whole World Ended,” which was released first as a single. The song was a hit, reaching #31 on the pop chart, and #1 on the R&B chart. It’s an excellent tune, with a good groove and a powerful, soulful vocal performance by David Ruffin. He sings, “Tell me, baby/Where did I go wrong, honey/Whatever changed your mind, baby/I’ve asked myself these questions over a million times/Baby, baby, oh baby.” That “Baby, baby, oh baby” alone is enough to grab you. The heartache is there in every line, every syllable, though the song is not a downer. You can dance to his pain.

His vocals have even a rougher quality on “Pieces Of A Man.” And though this is another song about a man torn apart, it too has a good energy. Listening to these tracks, you get to thinking if anyone can internalize pain and then exorcise it by singing it out, then David Ruffin can do it. Again he asks, “What did I do wrong, baby?”

“I’ve Lost Everything I’ve Ever Loved”

“I’ve Lost Everything I’ve Ever Loved” tells a story of woe, opening with these lines: “I was raised an only child/My folks died when I was four/They were trapped in a fire/Way up on the fourteenth floor.” So he was raised by his grandmother, but then she died too. And the troubles continued. Now he has a love, and is worried about losing her too over the course of the song. “I’ve Lost Everything I’ve Ever Loved” was written by John Bristol and Thomas Kemp.

In “The Double Cross,” it’s a friend who does him wrong. “About the sweet, sweet love I lost/And the way I got double-crossed/By a guy who was my friend/I see him now and then/But I pretend I’m doing fine/When I’m about to lose my mind.” David Ruffin does some surprising things in his vocal approach to this one. It’s like sometimes it gets to be too much and he just can’t take it and so has to shout out his pain. It’s a seriously good song.

“Message From Maria” is one of my favorites.  I love the way David’s lead vocals play over the backing vocals on the chorus, giving this song a wonderful feel. This one tells of receiving a suicide letter from his girl. “By the time you get this letter I may be gone/That’s what she said.” He sees where her tears hit the paper and realizes, “I’ll never see my Maria again.” There’s a great section toward the end where the bass line is more prominent.

David has lost his girl again in “World Of Darkness.” This is another favorite of mine. There are some excellent backing vocals giving it sort of a gospel feel, and an odd little instrumental hook that occurs occasionally throughout the song.

“Loving You (Is Hurting Me)”

The second album, Feelin’ Good, opens with “Loving You (Is Hurting Me).” In this one, love itself is hurting him, as he can’t stop loving a woman even after she’s gone.  “My heart says, You can’t live without her/But my mind says that’s not true.” Ah yes, sometimes love can be painful, and it’s difficult to align your heart with your mind.

My favorite song on this CD is “I’m So Glad I Fell For You.” It’s gorgeous, and features an excellent vocal performance by David Ruffin, full of emotion. “Yesterday my life was filled with sadness/I had little hope of ever, ever finding gladness.” This is a slower tune, with beautiful backing vocals supporting David. The heartbreak seems behind him – “I found sunshine, yes I did” – and the song expresses heartfelt thanks to the woman who turned things around for him. This is such a great tune. It was written by Arthur Posey and Glenna Session.

David Ruffin does a really good cover of “Feeling Alright,” which was written by Dave Mason and made popular by Joe Cocker. David seems to be having quite a bit of fun with this one.

Posted by Michael Doherty at 7:11 PM