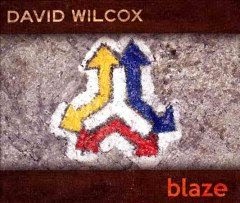 When I started getting into folk music in my late teens, David Wilcox was one of the first people I saw in concert. He used to play at a place called The Old Vienna Kaffeehaus in Westboro, Massachusetts, and always had a good rapport with his audience. He was so adept at connecting with his listeners, both live and on his albums, and that clearly remains true today. His newest CD, Blaze, boasts many excellent songs with intelligent lyrics, songs you can sink into. The album features all original material, written or co-written by David Wilcox. Blaze has a full band sound, but its heart is still that of a singer/songwriter. And for those who prefer the more stripped down acoustic sound, you can enjoy gems like “Drift” and “Single Candle.”

“Oil Talking To Ya”

The opening track, “Oil Talking To Ya,” premiered online before the CD, and it got me excited for the full-length album. It has a cool vibe, and a good message. There is kind of a rock and roll thing happening, with touches of blues. David Wilcox sings, “That’s just the oil talking to ya, it says you got no choice.” And it sure feels that way sometimes. But the song has an optimistic bent, as he adds, “But there’s a brighter voice.”  Yes, there is a positive outlook, which is appreciated. “Oil Talking To Ya” was written by David Wilcox and Ric Hordinski.

“Ocean Soul” is a love song with a sweet sound. The chorus reminds me a bit of Tom Petty – that is, the guitar part, not the vocals. “You’re so beautiful/You’re the ocean soul I need/You’re so beautiful/And I’ll be with you always.”

“We Came To Ride The Road”

I really dig the slow groove that begins “We Came To Ride The Road.” The song then has some interesting changes, each section with a very distinct sound. I love David’s vocals particularly on this track – those smooth, deep tones are delicious. And then the chorus has a sweet feel to it, helped by the backing vocals of Andrea Summer. As David Wilcox says in the CD’s liner notes, this one is about, and inspired by, a long-distance bicycle trip, and the song has the light, uplifting, beautiful feel you’d get from a trip like that. The song itself puts you in that frame of mind, where whatever is binding you somehow is looser.

“Guilty By Degree” begins like a heavier rock song, which is something of a surprise, the drums kicking it off. But when David’s vocals come in, the tune breaks to a higher plateau. The chorus then returns us to a cool, heavy blues riff and feel, and David really makes it work. There is something tough in his vocal approach to the chorus. Like I said, this one surprised me. It then continued to do so by becoming one of my favorites the more I listened to it.

He then takes us in a completely different direction with “Bail My Boat,” a happy, positive-sounding tune. This has a certain catchy rhythm, giving the song a fun vibe. “If I’m there in despair/Getting pounded by the waves/In the up-and-down world affairs, unprepared/Sure, the sea is gonna crash, but it doesn’t have to take me there.” This is another favorite of mine. Dan Joseph Dorff plays Fender Rhodes on this track.

“Guilty By Degree” and “Bail My Boat” were written by David Wilcox and Ric Hordinski.

“Drift” is a slow, incredibly pretty acoustic tune. David’s vocals and acoustic guitar are joined by Carol Sharar on violin and by David’s wife, Nance Pettit, on backing vocals, adding to the beauty of the song. “Each lonely drop of rain will be delivered/To the sea someday.” There is something sad in this song’s sound – something lonesome though loving. It’s a wonderful song.

“The Sacrifice” is a bluesy tune from the perspective of a policeman, and features a nearly spoken word type of delivery on some of the lines, giving a sense of immediacy to the story David relates. “I touch beneath his jawline for life under the skin/And he’s face down on the pavement, his neck feels cold and thin/So I’ll need some information from the two who called it in/’Cause the moment that it’s over is the moment it begins.” But then other sections are sung, and the contrast works to give the song an interesting power. I really like this line: “My badge covers my own heart, but these questions hurt my head.”

Blaze concludes with “Single Candle,” a softer, acoustic tune with a positive message. “But that simple truth’s insistence melted your resistance/’Til all at once you knew that what you knew must change.” Life sometimes seems too short for us to feel we can effect any true and meaningful change. But this song urges us to go for it anyway, with Martin Luther King as the example of what can be accomplished. “Your quick life had time enough to shine like the sun.”

Blaze was released on February 25, 2014 through What Are Records?

Posted by Michael Doherty at 11:46 PM