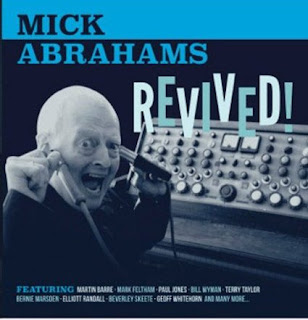 Mick Abrahams is probably still best known as the original guitarist for Jethro Tull, but he has also released several solo albums over the years. His newest, Revived!, finds him dipping into some classic rhythm and blues and rock and roll. Most of the tracks here are covers, though there are some originals too (one track was written by his son). Mick Abrahams has quite an amazing group of musicians joining him on this project, including Graham Walker on drums, Mark Feltham on vocals and harmonica, and Bill Wyman on bass. Martin Barre, who took over for Mick on guitar in Jethro Tull, joins him on guitar for one track. There are some really good tunes on this album, and its title is clearly a playful nod to Mick's recent health issues. This CD includes liner notes by Mick Abrahams, with thoughts on each of the tracks. Also in the limited edition version of this release is a bonus disc, a DVD.

Mick Abrahams kicks off the album with an original tune, “Summer Day,” a kind of heavy bluesy rock number that features Peter Eldridge on vocals, and a good bass line by John Gordon. The album actually concludes with a different version of this tune, featuring Josh Phillips on Hammond. The rest of the musicians remain the same as on the first track. “Remember” is another original song, a wonderful blues number that features Mick on lead vocals as well as guitar. “Oh, I remember you, baby/The first time I saw you I fell in love with you.” Bernie Marsden (whom you might know from Whitesnake) joins him on guitar. This track also features some fantastic and passionate work on harmonica by Paul Jones.

Most of the other tracks are covers, including three songs written by Jerry Leiber and Mike Stoller. “What About Us?” is the first of the Leiber and Stoller covers on this CD. It’s a playful number that features vocals by Mick Abrahams and Patrick Walshe, and Nick Payn on saxophone. One of the CD’s most fun tracks is the groovy rendition of “I’m A Hog For You,” also written by Jerry Leiber and Mike Stoller. Beverley Skeete does a completely delicious job on vocals, and Bill Wyman plays bass on this track. The first version I ever heard of this song was an early live version by the Grateful Dead, with a heavy blue edge due mainly to Pigpen’s influence. The version here has almost a bit of a swing to it, which is great. And I love the guitar. Beverley Skeete also provides vocals on “Poison Ivy,” another Leiber and Stoller tune. Bill Wyman is on bass for that one as well. By the way, Beverley Skeete also sings with Bill Wyman’s Rhythm Kings. You can hear her on the five-disc set, Collector’s Edition Box Set, which was released in 2011.

Mick Abrahams does a good job on “On The Road Again,” the Canned Heat song, which was based on an earlier blues tune. Patrick Walshe does the vocals on this track, and Mark Feltham plays harmonica. Another song I’ve loved for a long time is “Bright Lights, Big City,” and Mick Abrahams does a wonderful rendition, with a steady blues vibe. He and Paul Jones share vocal duties on this track, and Paul Jones also plays a mean harmonica. Bernie Marsden is on guitar, and Jim Rodford is on bass (you likely know Jim from his work with The Kinks). This version does seem to end a bit prematurely.

Another highlight for me is “Goodnight Irene.” I’m not sure I’ve ever heard a bad version of this song. It’s just one of those inherently excellent tunes. And Mick Abrahams delivers an interesting take on it, giving it a soft blues edge, which works so well. He sings lead, but has some backup singers on the chorus. He also plays slide guitar on this track. Paul Jones is on harmonica.

This CD includes several instrumental tracks. The first, “Elz. & Abys Jam,” is a groovy track, with Chris Gore on keyboard, and a brass section. Elliott Randall (whom you probably know from Steely Dan) joins Mick on guitar. Mick and Elliott co-wrote this one. They also co-wrote “North By North West,” a great bluesy instrumental track which features just the two of them on guitar.

“Dragonfly” is a kind of sweet and pretty instrumental track, written by Alex Abrahams, Mick’s son, and performed by just the two of them on guitar. This is actually one of my favorite tracks. “Red River Rock” is a seriously fun instrumental, with both Nick Payn and Frank Mead on saxophone. Frank Mead also plays squeezebox on this track. Geoff Whitehorn is on guitar, and George Muranyi is on keys.

The second disc of the limited edition release of this album is a DVD, which contains an introduction by Mick Abrahams, where he talks about his health, mentioning the stroke he suffered from. He also talks about the song choices for the album, and the many musicians who appear on these tracks. Mick has a sweet, kind of playful disposition, and speaks highly of those working with him.

There is also footage from the studio, including the band working on “Nadine,” “On The Road Again,” “What About Us” and “Hungry For Love.” There are also some outtakes from Mick’s interview.

CD Track List
I’m not sure of the exact release date of Revived! According to the press release, it was released on April 7, 2015. According to the Gonzo Multimedia site, it will be released on June 29, 2015 (but that’s a Monday, which seems odd). And according to Amazon, it will be released on July 24, 2015. Well, whatever the release date, fifty percent of all royalties made from the sales of this CD will go to a children’s charity. To get the edition with the DVD, you have to order it directly from Gonzo Multimedia.
Posted by Michael Doherty at 6:45 PM