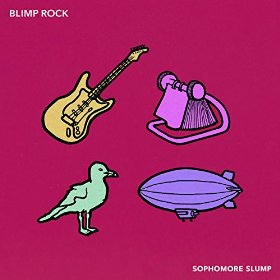 I was turned on to the Toronto band Blimp Rock a couple of years ago when they released their self-titled debut album. That CD was such a delightful surprise, with a sense of humor and an original and wonderful viewpoint expressed in the songs. Their new album, Sophomore Slump, is likewise completely enjoyable, with impressive and inventive songwriting. All of the songs on this album are originals, written or co-written by Peter Demakos.

The album opens with “Will It Ever?” I love how this song combines one’s first love with one’s first interest in music, two things that have always worked together in my mind. In this song, they ask “Will you ever feel so flush as with your first crush?” and “Will you ever feel so alert as at your first concert/Will you ever feel as bold as taking that first record home?” It obviously has a nostalgic vibe, and there is something sad in thinking that those intense feelings won’t return. But as the lines are presented as questions, you are left with the feeling that it’s possible. And for me, the power of music has never diminished. And as for love, it’s only gotten better.

That song leads right into the title track, “Sophomore Slump,” which takes those ideas of first love and early interest in music, and gives them a more personal spin, like they’re answering the questions presented in the first song. There is a humor to the decidedly negative feel to the answers, which come as a surprise after the mellow, even hopeful, feel of the first track. “Well, my first crush didn’t talk to me/’Cause they were too cool and far out of my league.” (I do wonder about the use of “they” rather than “she” or “he.”) And: “Though my first show was The Who, I started feeling sick, and I’m sure I puked.” In addition to The Who, the song mentions the Canadian band Prozzak: “My first record had two good tracks/Saturday People by Prozzak.” (That album was released in 2000, which sort of makes me feel old. I mean, someone’s first record was one released so recently? I don’t own that one, but of course I’m now wondering which two tracks Blimp Rock is thinking of.) “Sophomore Slump” is one of my favorite tracks on this CD.

It’s followed by “Vampires,” a fun and catchy song with a great sense of humor. Its first lines make me laugh every time I listen to it: “I blame my thoughts on the internet/But I know they were there before that.” Like the first two tracks, this one also looks back to childhood, with lines like “My mind imagining all of the different things that could go wrong/Just like the vampires camped out in my closet/A million kinds of monsters under my bed/I don’t think of these things too much anymore/But they left tracks and grooves in my brain.” I love the lines, “Tell me how did they first get into my room/Why did they never make their move?” I also love the humorous reference to efforts to eat a more healthful diet.

The band also displays a wonderful sense of humor in “Sensitive Boys.” The first lines make me laugh out loud: “This one goes out to all the sensitive boys/You know who you are ‘cause you just got a chill.” And I can’t help but appreciate the reference to those fans of The Smiths: “Fear of what their gods might see/Then a fear of what Morrissey might think/That’s the fate of a sensitive boy.” Those lines really took me back, reminding me of certain kids in high school, a certain disposition and attitude. And I love Claire Whitehead’s work on violin. Robyn Letson provides vocals on this track.

“Music Industry Blues” is a somewhat wry look at the current state of the music industry, with lines like “Send your sheet, compress songs to MP3” and “Dear music writer, did you like our one sheet?” He then repeats, “Did you like it,” taking on a bit of a twisted, eager tone, even changing it once to “Did you love it?” One thing I really like is that there is an oddly positive feel to the sad line, “Someday we might break even.” Robbie Grunwald plays piano on this song.

“Let’s All Stay In Tonight” is another that had me smiling, because I’ve had those thoughts about concert bills and about staying in: “Toronto town on a Saturday night/You tell me there's this cool show/I see there's more than two bands on the bill/So I don't think, I don't think I'm going to go/'Cause I wish it started at seven/And we could get to bed by eleven.” This song seems to simultaneously poke a bit of fun at that attitude while completely understanding it, even sharing it, if not promoting it. “Let’s All Stay In Tonight” was written by Peter Demakos and Owen Nowlan.

Blimp Rock’s first album opened with a track titled “Blimp Rock Live.” On the back of that CD there is a note: “All proceeds go towards Blimp Rock Live, the world’s first airborne rock festival.”  The band hoped to raise money to purchase a blimp to house a music festival over Lake Ontario. Sophomore Slump contains this note on the back: “The only plausible reason Blimp Rock’s first album didn’t achieve our goal of raising $700,000 for our airborne rock festival was simply because it was their first album. That is why we had them make a second.” And so this CD gives us “Blimp Rock Live 2.” As much as I want them to raise that money, I hope it won’t mean a lack of future releases (sure, I'm taking them seriously). Because this is one of the most interesting bands around today. I’ve become seriously fond of them, and am excited to hear more.