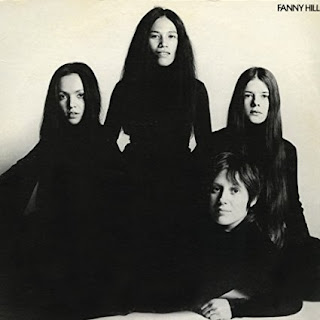 Fanny is an excellent all-female band from the early 1970s. I got turned on to them a couple of years ago when Real Gone Music re-issued their first album, titled simply Fanny. Now Real Gone Music is putting out an expanded edition of the band’s third album, Fanny Hill. The title had me smiling before I even popped the disc into my player. Because, yeah, if you have a band named Fanny, particularly if the band is all girls, you absolutely must have an album titled Fanny Hill. Fanny Hill, for those who don’t know, is the popular title of the erotic novel Memoirs Of A Woman Of Pleasure, which was published in the 1700s. Anyway, as much as I enjoyed Fanny, Fanny Hill is actually a much stronger album. Most of the songs are originals, and the two covers are given different and interesting spins. This expanded edition includes six bonus tracks, as well as new liner notes by three of the four band members, who talk a bit about each of the songs (including the bonus material).

Fanny Hill opens with one of its two covers, a seriously excellent and original take on Marvin Gaye’s “Ain’t That Peculiar.” I love what they do with this song, particularly the way they handle the chorus. They give it a bluesy edge, and drop the “A peculiarity” line. This version begins with some cool percussion, and then check out June Millington’s work on slide guitar. I love Marvin Gaye, but this rendition is so much fun, and it has some fantastic instrumental sections that totally rock.

“Knock On My Door,” written by Nickey Barclay, has a nice intro on keys. And once the vocals come in, it has almost a sort of theatrical vibe to it. I like the different tones of this song, how the tone changes depending on what the woman of this song is thinking. For example, it has a serious, somewhat urgent tone when she sings, “I wonder how you kept it a secret/I think that I would die if she knew/I wonder what she’s going to say/When she finds that I’ve taken you.” And then it becomes much lighter when she sings, “Knock on my door/Knock on my door/I’ll be waiting for you,” for she’s clearly happy knowing he’s coming and is thinking of herself at this point, not about the other woman. It is a really well-structured song.

And then “Blind Alley” slowly creeps on you, then pounces. What a great opening. This is an unabashed rock song, with some powerful vocal work. “Blind Alley” was written by Nickey Barclay and Alice de Buhr. They follow it with “You’ve Got A Home,” which has more of a folk vibe, and is kind of a lullaby. It was written by June Millington. Here is a taste of the lyrics: “Run to the bedroom and I’ll tuck you into bed/Read you a story, then I’ll kiss your sleepy head/Someday I’ll have to tell you the reason we live alone/You may not have a father, but you’ve got a home.” And check out this line: “I didn’t plan it, but I’m glad that you were born.” No empty pop lyrics here.

“Wonderful Feeling,” written by Jean Millington, has such a pretty feel to it, due largely to Jean’s vocals. “I'd been spending my nights with you/I was thinking that I'd be true/But the world doesn't end/You were really a friend/That I loved because I needed to/I don't want to lose that wonderful feeling/I don't want to choose.” There is also some really nice guitar work. The bonus tracks include the single version of this song.

I love the piano on “Borrowed Time.” This is a fun tune, written by Nickey Barclay. On this one, they’re joined by Jim Price on trumpet and trombone, and Bobby Keys on saxophone, giving it a full rock and roll sound. That one is followed by the album’s second cover, “Hey Bulldog.” (It’s interesting to me that on the original record, the covers kicked off each side.) They do a really good job with this song, adding a few lyrics of their own (with the Beatles’ blessing), and leaving off much of the goofing around at the end. Also, oddly, “You don’t know what it’s like to listen to your fears” becomes “I know just what it’s like to listen to my fears,” almost as if the girls are answering the Beatles.

“Rock Bottom Blues” is another fun rock tune, written by the entire band, with lead vocals by Alice de Buhr. Bobby Keys is on sax, and Jim Price plays trumpet and trombone on this track. The bonus tracks include the backing track for this song, as well as the version with the original vocal track, which might actually be better than what was released on the album. “I’m bitten by the rock and roll disease/So won’t you help me make a record please/It’s so fucking hard.”

The title “Sound And The Fury” is a Shakespeare reference. It comes from that fantastic speech by Macbeth in the fifth act: “Life’s but a walking shadow, a poor player/That struts and frets his hour upon the stage/And then is heard no more. It is a tale/Told by an idiot, full of sound and fury,/Signifying nothing.” Writing just doesn’t get any better than that. And “Sound And The Fury” is one of my favorite tracks on this album. It’s a country song written by June Millington. “Now the sound and the fury have some place to go/Now the sound and the fury are all I know.”

This special expanded edition of Fanny Hill contains six bonus tracks. Besides the ones I’ve already mentioned, these include “Tomorrow,” “Young And Dumb” and “No Deposit, No Return.” As great as this album is, these bonus tracks are actually among my favorites on this CD. “Tomorrow” is a wonderful folk tune written by June Millington. “Young And Dumb” is an incredibly fun and lively track, a cover of the Ike & Tina Turner song (Ike Turner wrote it). The main line is “Young, dumb and full of/Come on to me.” Not too subtle, Ike! Fanny does such a good rendition of this song, but I think the following track, “No Deposit, No Return,” is even better. It’s a delicious and playful little country song written by Nickey Barclay. I love the word play in this song. Check out these lines: “I give you your way/You get in my way/Your chosen highway/Is not a sure way/Yours is the wrong way/Until you find a righter way/Here is the doorway.” I just fucking love this song. It’s actually my favorite on this disc. “That's all!”