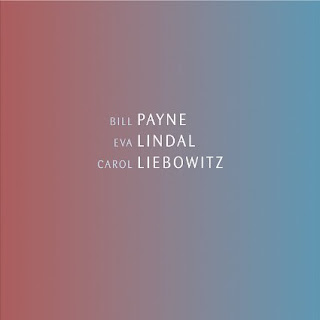 The new, self-titled CD from Bill Payne, Eva Lindal and Carol Liebowitz is a strange, sometimes joyous, sometimes unsettling album. The music was completely improvised, and recorded in one day in June of 2012, with Bill Payne on clarinet, Eva Lindal on violin and Carol Liebowitz on piano. These musicians each have such interesting and diverse backgrounds, which clearly come into play in these improvised pieces. Bill Payne actually worked with the Ringling Bros. circus for several years, as well as other circuses. Eva Lindal is from Stockholm, and has been a member of KammarensembleN since 2008, and is also a member of Katzen Kapell. Carol Liebowitz attended the High School of Performing Arts and NYU, and is a singer in addition to being a pianist. You can hear her vocal work on Time On My Hands, a CD she recorded with Any Fite. One common element among the three musicians is Connie Crothers, with whom they've worked and studied. And of course they share a love of improvisation.

“Ever Since,” the CD’s opening track, has an oddly unsettling effect as each instrument gives us what feels like its own memory, its own feeling. It is somewhat pretty, somewhat haunting. And then they combine, reaching a moment together and building in intensity from there, before separating again, and then rising again together. It’s like toward the end they’ve accepted some common fate, perhaps even finding delight in it.

“It Happened This Way” has a more playful feel, though perhaps a bit disjointed at first, like each trying to tell a slightly different story simultaneously, but then teasing each other. It’s really interesting, the way the instruments converse, each having its own personality, then come together.

“Unspoken” begins softly, with a kind of eerie atmosphere. The strange little touches on each instrument work on your imagination, as you fill in the spaces with whatever might be preying on your mind. It’s followed by “B/E,” a delightful and playful track, like a sprite frolicking throughout the woods, perhaps looking for a bit of mischief, and quickly finding some playfellows and soon beginning a fanciful dance. This is one of my favorite tracks.

“Preludes” is another highlight for me. It’s an interesting track. The violin opens, with something urgent to say, grabbing out attention in fits and starts, then suddenly disappearing as the clarinet more gently announces its presence. It has a more joyous, pleasantly excited vibe. Then it too backs off for the piano to enter. The piano conveys both beauty and chaos, sweetness and anger. Then all three come together, bringing their various views and emotions into one intriguing piece. Things can get a little crazy, a little intense at moments. And the following track, “Holus Bolus,” is a wild, chaotic, excited piece, as if the voice of each instrument is striving desperately for our attention. Holus-bolus means “all at once; in one lump.”

“What We Are Saying” is kind of an odd track, and the title is appropriate, as in one section there are actually some vocals, though they’re my least favorite element of this track. My favorite sections are actually the solos. The CD concludes with “’Til Always,” which is another highlight for me. It's so pretty at times. It feels like a relationship of love and compromises, differing opinions, but so much passion.

CD Track List
Payne, Lindal, Liebowitz was released on June 5, 2015 through Line Art Records, a new label. I don’t usually mention CD artwork, but in this case I have to point out that the painting on the inside cover is wonderful. It was done by Jeff Schlanger, and I cannot conceive a reason as to why it wasn’t used on the front cover.
Posted by Michael Doherty at 7:04 PM