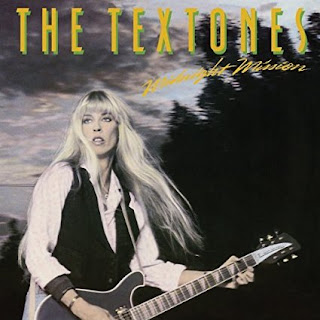 Midnight Mission was The Textones’ first full-length album, originally released in 1984, at the height of fun ‘80s pop. And this band does have a bit of that glorious pop sound for sure, but has so much more going on, deliciously mixing genres like pop, rock, blues and country. The songwriting is really strong, and most of the tracks on this album are originals. It has now been re-issued by Omnivore Recordings, with five bonus tracks, including two that were previously unreleased. There are also new liner notes by Mark Leviton.

The album opens with “Standing In The Line,” a vibrant pop rock tune with a steady bass line and moments where Carla Olson’s vocals have a wild, raw edge. “Why are we standing here/Thinking things are fine/What are we waiting for/We’re just wasting time.” Ah, that’s what I think every time I’m standing in line, no matter what the line is for. It’s a good song, but I prefer the following track, “Hands Of The Working Man,” which was written by Tom Junior Morgan and Carla Olson. It has a bright 1980s pop vibe, with a cool bass line, but also a nice acoustic rhythm guitar and solid lyrics, like these lines which begin the song: “It used to be that a man could work an honest day/It used to be that a man could earn some decent pay/But now the wheels of progress are grinding to a halt/And everywhere you turn the people say it’s not my fault.” And I like Tom Junior Morgan’s work on saxophone.

“No Love In You” begins with a Rolling Stones-like guitar lick, and is a good, fairly straight rock tune, the kind you want to dance to outside in the summer sun. It was written by Michael Anderson. Then with “Number One Is To Survive” the band dips into country rock. This is one of the disc’s highlights, and features Ry Cooder on slide guitar. “Number One Is To Survive” was written by Carla Olson. Is it just me, or does Carla sound like Chrissie Hynde at the very beginning of “Midnight Mission”? She wrote that one with Barry Goldberg, who plays keyboards on the track. Don Henley provides backing vocals on this one.

My personal favorite on this CD is “Upset Me,” which was written by George Callins, who also provides vocals on this track. I love the drive and energy of this tune, and of course the saxophone is just perfect. I also really dig Carla’s lead guitar part. “I was over you/I thought we were through/Was I lying/I really want to know/Which way to go/Eighteen weeks since the thought of you upset me.”

“Clean Cut Kid” is another of the disc’s highlights. It’s a Bob Dylan song, though its first appearance on an album was here. Bob Dylan wouldn’t release his version until the following year, on Empire Burlesque. He let Carla have the song as a thank-you for appearing in his music video for “Sweetheart Like You.” This is a very cool rock tune with a bluesy edge and some great work on keys. That’s Barry Goldberg on keyboard. Ry Cooder plays slide guitar on this track. I love Carla’s vocals here.

This special re-issue includes five bonus tracks. The first, “It’s Okay,” is one of my favorite tracks of this CD. It was written by George Callins, and has kind of a catchy vibe. “You know I’ll always be there for you.” “Just A Matter Of Time” is a fun pop tune, and I love the way Phil Seymour’s vocals work with Carla’s lead vocals. “It’s just a matter of time/Before we know if things will work out/It’s just a matter of time/We have to hope that things will work out.” The bonus tracks also include an alternate version of “Number One Is To Survive.” It has a more stripped down feel at the start, and when it kicks in, the groove feels more pronounced than in the other version. It’s a seriously good version.

The final two tracks are live recordings of two of the songs from this album, “Running” and “No Love In You.” These tracks were recorded at The Palace in Hollywood, and were previously unreleased. The sound quality isn’t perfect, but the performances are good.

CD Track List
This special re-issue of Midnight Mission was released on May 26, 2015 through Omnivore Recordings.
Posted by Michael Doherty at 8:07 PM