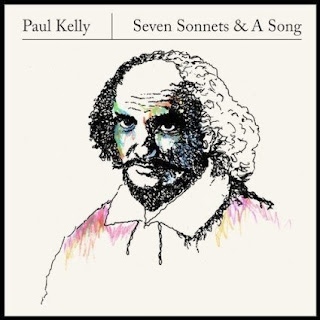 The new Paul Kelly CD, Seven Sonnets & A Song, combines two passions of mine: Shakespeare and great music. This isn’t the first time Paul Kelly has turned to Shakespeare on one of his albums. On his 2012 release Spring And Fall, an album of love songs, there is a hidden track titled “Where Are You Roaming.” This is a song sung by Feste in Twelfth Night, and it’s also known as “O Mistress Mine.” Interestingly, Paul Kelly includes this song on his new CD as well, this time under that other title. That is the Song of the CD’s title, Seven Sonnets & A Song. One poem on this CD, however, was not written by Shakespeare, but rather by his contemporary Philip Sidney.

The more I hear from Paul Kelly, the more of a fan of his I become. He’s a damn good writer himself, but on this album he turns to the best writer the human race has ever produced. Known mainly for his dramatic works, William Shakespeare also wrote several poems and 154 sonnets. Paul Kelly has chosen six of the sonnets (including the most famous, Sonnet 18) and set them to music.

The CD begins with “Sonnet 138,” which is set to a cool, smoky, jazzy groove. Paul does make some changes to it. He removes the word “that” from the first line, singing “When my love swears she’s made of truth.” After “On both sides thus is simple truth suppressed,” he then goes to the final couplet, changing it a bit as well. “O, I lie with her, and she lies with me/In our faults by lies we flattered be.” He repeats those two lines, using them as a sort of chorus. He then returns to “But wherefore says she not she is unjust,” then continuing to the end of the sonnet, again making the changes to “Therefore I lie with her and she with me.” There is also a cool instrumental section.

That’s followed by “Sonnet 73.” This one Paul Kelly doesn’t change at all. He sings it as a beautiful folk song, aided by the sweet harmony vocals by Alice Keath. Lucky Oceans (from Asleep At The Wheel) plays pedal steel on this track, which is one of my personal favorites. This is just wonderful. “In me thou see’st the twilight of such day/As after sunset fadeth in the west.”

Probably the most well-known of Shakespeare’s sonnets in “Sonnet 18,” which begins “Shall I compare thee to a summer’s day?” Paul Kelly delivers the first four lines a cappella. Then he adds his acoustic guitar. And at the line “By thy eternal summer shall not fade,” strings are also added (I am always a sucker for cello). Paul makes only one slight change to the wording, singing “As long as men can breathe” rather than “So long as men can breathe.” And after the last lines, there is a beautiful instrumental section which features Aaron Barnden on violin, Leah Zweck on viola, Charlotte Jacke on cello and Alice Keath on banjo. Alice Keath then joins Paul on vocals, and they sing the sonnet a second time through. This is an absolutely beautiful rendition of the famous sonnet.

“My True Love Hath My Heart” was not written by Shakespeare, but by Philip Sidney. As I understand it, it is part of one of his longer works, titled The Countess Of Pembroke’s Arcadia. But having not read that work, I’m not sure exactly how it fits in.  On this track, Vika Bull sings the lead vocal part, with Paul Kelly on acoustic guitar. Linda Bull provides harmony vocals. This is a gorgeous song, having something of a timeless feel. The vocals are stunning, and I am going to have to pick some albums by Vika And Linda soon.

Sonnets 44 and 45 are related, and so Paul Kelly combines the two into one song. For “Sonnet 44,” Paul’s vocals are accompanied by Cameron Bruce on piano. It is a heartbreaking performance of a piece that contains a sadness and longing for a distant lover. There is the idea that the distance can be overcome by thought of the other person, but he is upset that he can’t follow physically, for he isn’t as light as thought. The rest of the band then comes in between the two sonnets, and Paul’s vocal approach takes on more energy for “Sonnet 45.” This is such an excellent, impressive and quite moving reading of these connected sonnets.

Vika and Linda Bull join Paul again for “Sonnet 60,” which is about mortality. It’s kind of a depressing sonnet, though the final couplet is one in which Shakespeare hopes that his very verses will keep his friend or lover alive and young (an idea he revisits in several of the sonnets). There is a distance and a bit of anger to Paul’s vocal approach, until the final couplet, which he sings with a touch of hope. As with “Sonnet 18,” after an instrumental section, Paul sings the sonnet a second time. This second time has more power, and feels like destruction, like an inevitable end, a reaction to the cruelty of time. It’s a remarkable performance.

The CD then concludes with “O Mistress Mine,” the song from Act II of Twelfth Night. Of course, you can draw a connection to “Sonnet 60” because of its final line, “Youth’s a stuff will not endure.” But this is a pretty song, and Paul Kelly does a wonderful job with it.

CD Track List
Seven Sonnets & A Song is scheduled to be released on CD and vinyl on July 29, 2016. It was made available digitally on Shakespeare’s birthday, April 23rd. By the way, I absolutely love the CD cover, which is a nod to the covers of the old Signet Classic editions, the versions many of us read in school.
Posted by Michael Doherty at 11:03 PM