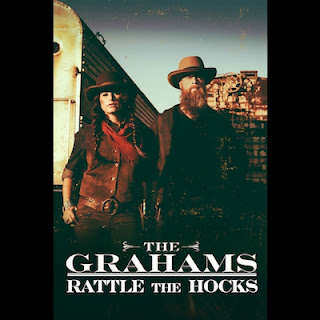 Earlier this year The Grahams released a deluxe edition of their excellent album Glory Bound, the original version of which came out in 2015. Also released in 2015 was Rattle The Hocks, which was basically the soundtrack to a short film titled The Grahams Rattle The Hocks. That film is now available digitally.

A title card at the beginning of the film tells us that The Grahams (Alyssa Graham and Doug Graham) traveled the country by train in the summer of 2014, and arrived in Memphis with songs inspired by their adventures and experiences. Musician Cody Dickinson (of North Mississippi Allstars), who played with the duo, documented part of that journey, as well as the recording of the band’s new material. Obviously, Alyssa and Doug were inspired by Woody Guthrie, and in fact “Hard Travelin’” plays over the opening titles.

The film is a loose, but intimate look at The Grahams, and is narrated by both Alyssa and Doug (the narration having been written by Bryan McCann). Alyssa says, “There’s a special connection between American folk music and the railroad that has no parallel elsewhere in the world.” She talks about the band’s own goals in traveling by train: “We’re looking for the modern echo of older sounds.” The film is about the band, about the rails, and about the land and towns they visited, but mostly it is about the music. We see them playing “Glory Bound,” and there is footage of them recording “Promised Land,” “Biscuits” and “Tender Annabelle.” There is also footage shot at Sun Studios where they perform “Mama,” which is gorgeous and sweet. I also really like the footage of them playing “Lay Me Down” while leaning against a great old tree. And we see them perform “City Of New Orleans” on the actual City Of New Orleans (as well as with a full band in New Orleans).

The Grahams Rattle The Hocks is approximately thirty minutes, and is a treat for all fans of American folk music. It was released on digital formats on July 8, 2016. There are no special features.
Posted by Michael Doherty at 5:17 PM