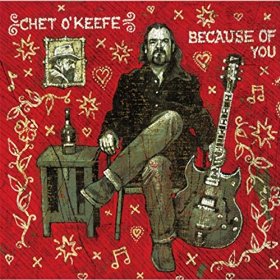 Chet O’Keefe sings on one track of the new CD by Auburn, Love & Promises, which was released in June, and he and Auburn’s lead singer, Liz Lenten, have been touring together. Released on the same day as Love & Promises is Chet’s new CD, Because Of You. This is his third album, following 1998’s Four Wheel Low and 2010’s Game Bird (the latter featuring Nanci Griffith on backing vocals on “Some Swedish Men” and “Petting Zoo”). And though Because Of You is his new CD, these tracks were actually recorded a few years ago, and were made available digitally in the summer of 2014. Chet wrote most of the songs, but a couple of tracks feature lyrics that Blaze Foley had written but never recorded. So Chet set those to music.

The CD leads off with “Not Drunk Yet,” a really good song which begins with the positive lines “Everything is quiet/Everything is cool,” then turns suddenly, “And my heart’s ripped out/And my brain just shouts/Why am I such a fool?” Ah, those strange and strong conflicting feelings when missing someone, weak and vulnerable and wanting more. “You make me feel like a man I once knew/And I can’t wait to get together again with you.” That’s followed by “True Love,” a sad and sweet song about two people looking for love. At times it reminds me of “The Band Played Waltzing Matilda,” but instead “Waltzing Matilda,” Elvis Presley songs are playing as a backdrop to this tale. The characters are vivid, and the song is kind of beautiful and moving.  Some lines are delivered almost as spoken word: “And she cooked lots of dinners/And she even got thinner/And Jimmy, he grew closer to God.”

The CD’s title track, “Because Of You,” is one with lyrics written by Blaze Foley. It has a sad feel, about a man lost in memories. “Well, I thought so many times your ghost had quit to haunt me/And then you reappear every now and then/There used to be a time when all you did was want me/Now that time is gone, it will never come again.” There is ultimately, perhaps, something positive in the final line, “It’s too long that I’ve been crying because of you,” because within that line is some kind of determination to move on, especially as the line is repeated. That one is followed by a goofier, happier tune, “Hick Tech(nology).” The line “Put your earplugs on/Because the muffler’s gone” made me laugh aloud the first time I put on this disc. “Goin’ Downtown” is the other track with lyrics written by Blaze Foley, and it’s one of my favorites. It’s about a man looking for some company downtown to help him shake his blues, and it has kind of a sweet vibe.

“Oh Angel” is another strong track, co-written with Thomm Jutz, Kim Richey and Jon Weisberger. It is really pretty, and features some excellent lyrics, like “Throw me a line to a time that I won’t regret” and “When I look homeward, you’re what I see” and “When ‘one more’ turns to more, you pull me from the brink.”  Kim Richey adds to the beauty of this song with her backing vocals.

Another track I am really fond of is “Drinkin’ Day.” Check out the opening lines: “Well, today’s going to be a drinkin’ day/My peace of mind has gone away/She said she was leaving, but she stayed/Looks like it’s going to be another drinkin’ day.” I love the way those lines surprise us, that it’s her remaining, not her leaving, that causes him to drink. Wonderful! The album concludes with “Talking Kerrville Blues,” a song about the Kerrville Folk Festival from a musician’s perspective.

CD Track List
Because Of You was released on  June 17, 2016 on Scarlet Records.
Posted by Michael Doherty at 2:06 PM