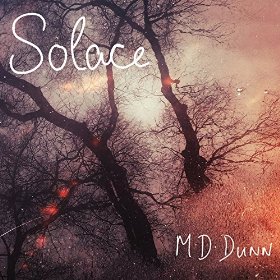 Singer, songwriter and poet M.D. Dunn’s newest release, Solace, features mostly original material, including several rather pretty guitar instrumentals. The music has something of a mellow 1970s folk feel at times. This is his seventh release, and was produced by Rusty McCarthy, who also plays bass, banjo and guitar on it. Also joining M.D. Dunn on this CD are Chris Murphy on drums, Al Wood on harmonica, Cliff Alloy on percussion, Jenny Gauvreau on piano and backing vocals, Sheldon Jaaskelainen on violin, and Britta Wolfert on backing vocals. Mark D. Dunn is based in Ontario (yes, great music continues to come from that area).

The album opens with “Beauty,” which begins with some excellent work on acoustic guitar. It eases in, the guitar taking you on a little journey. And then when the vocals come in, you find yourself on a familiar road: “You’re a little too tired/You know you’re too stoned to drive/So you pull over to the shoulder of a road you’ve known all your life.” The song kicks in and features something of a driving beat and energy, with passion behind the vocal delivery. “Come on and be the beauty/Heal this wounded world.” There is some great work by Al Wood on harmonica, which never rises to overpower the guitar. “I’ve got a hole in my heart the shape of God’s fist.”  Like “Beauty,” the following track, “Master Of Doubt,” starts with some good work on acoustic guitar to pull you in. It’s the guitar that is really at the heart of this CD. “Master Of Doubt” is about a certain longing and a shyness keeping him from acting on it. “And too scared to even speak with you/I looked away before you knew.”

“Miracles Happen (And Frequently Go Unnoticed) Even On A Day Like This” is the first of the album’s instrumental tracks. It is really pretty, and features some wonderful work on guitar. Again, it is the acoustic guitar that is at the heart of this release. Partway through the track, the violin eases in, and the track becomes more beautiful. The violin does the same for the CD’s title track, “Solace.” While that song has a strong 1970s vibe, the lyrics mention more modern contraptions: “She’s screaming at the phone/Under my window at 2 a.m./Got the broken GPS blues.” Those lines come as a surprise to me, and sort of lift me out of the song, if only momentarily. Another thing that comes as a surprise is the inclusion of a live track, “Watchful,” which was recorded in January of this year. On this one he is joined only by Rusty McCarthy on bass, which actually was recorded later. Basically, this is a live solo performance. I think I would have cut the audience reaction at the end, the applause, because it’s a bit jarring.

The album’s second instrumental track, “Snow Angels,” is, like “Miracles Happen,” quite pretty. Apparently, this one originally had lyrics, and a vocal version was included on Dunn’s first release, 1994’s After The Great Sleep (but I haven’t been able to find that track online to give it a listen). On this instrumental rendition, he is joined only by Rusty McCarthy. The other instrumentals are “Seasons” and “The Companion.”

“On Without End” is another with a strong 1970s vibe reminding me a bit of America or perhaps Stephen Stills or Neil Young. “City is green when seen from above/The river winding through like a snake/Swirling in the center/The cells in the body just glowing with love/It’s like looking in a mirror/That looks into the eyes of the universe/You go on without end.” Sheldon Jaaskelainen adds some beautiful work on violin. Britta Wolfert and Jenny Gauvreau provide backing vocals. It’s really good, but probably my favorite track is “The Last Beautiful Thing.” There is just something about this song that gets right to me. Sure, the violin is excellent. And I love the backing vocals by Britta Wolfert and Jenny Gauvreau. But I think it’s the lyrics that really make this track stand out. There is something warming and friendly and positive about them. “I know you/By the songs that you give/And you came through/Came through/When everyone was wrong/You came through/Came through/When everyone had gone.” It’s a beautiful song.

The album’s only cover is actually an adaptation of an e.e. cummings poem, “i thank you, god.” The last two lines of the poem are used as sort of a chorus, sung after the first stanza as well as later. The album concludes with “Diamond Inside,” which, sure, is a bit corny, but also really sweet. “Everybody has a diamond inside/See it shining in their eyes.”  I ended up really liking this song, partly because of the beautiful violin. The sweet, honest feel ended up moving me.