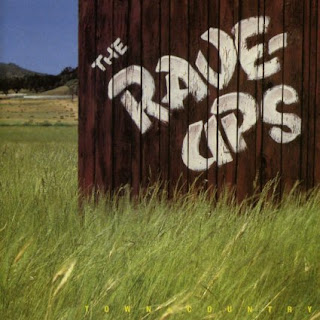 The Rave-Ups’ first full-length album, Town + Country, was one of the best records of 1985. The music combines elements of rock, punk, folk and country, and is a whole hell of a lot of fun, while still having something to say (like in “Class Tramp”). It has now been re-issued, and the music sounds as great as ever. This special expanded edition contains eleven bonus tracks, all of which were previously unissued, as well as new liner notes by vocalist, guitarist and songwriter Jimmy Podrasky.

The album kicks off with “Positively Lost Me,” an excellent song that was also released as a single. It sort of sneaks up on you and then quickly grabs you at the beginning. It was written by Jimmer Podrasky. And somehow it doesn’t seem egotistical when he opens the song with the line “You lost a lot when you lost me.” Turn this one up, sing along, and enjoy. By the way, this song was featured in the movie Pretty In Pink.  It’s followed by “Remember (Newman’s Lovesong),” which is also is a fun song, sung with a bit of a twang at moments. This one was also written by Jimmer Podrasky.

The line from “Better World” that always stands out for me is “If God is dead, then who took over?” This track features pedal steel by Sneaky Pete Kleinow (from The Flying Burrito Brothers). “In My Gremlin” is a wild and deliciously fun track. The energy reminds me a bit of Elton Motello’s “Jet Boy Jet Girl,” or rather that Plastic Bertrand song “Ca Plane Pour Moi,” with those “Whoo-oo-oo-oo” backing vocals. This is a song I’ll be adding to my road trip mix CD play list. It has a playful nod to the Beach Boys’ “409” in the line, “She’s so fine, my 109.” “In My Gremlin” was written by Jimmer Podrasky, Michael Kaniecki and Bob McGrath.

One of my favorite tracks is the delightful “Not Where You’re At (But Where You Will Be),” which mentions Pittsburgh, the city the band was originally from. The song is not about Pittsburgh, however; it’s about being in Los Angeles, with lines like “Palm trees speak to me.” Having lived in this city for quite a while now, I can relate to these lines: “Well, I don’t know what else to say/I kinda like this place/Well, I don’t care what people say/I kinda like this place.”

The only cover on the original album is an interesting rendition of Bob Dylan’s “You Ain’t Goin’ Nowhere.” I’m mostly familiar with The Byrds’ excellent version of this song. But The Byrds messed up a line, singing “Pack up your money, pick up your tent” rather than “Pick up your money, pack up your tent.” And so Dylan actually called Roger McGuinn out in one of his own versions, which featured different lyrics. What’s interesting is that it’s this version that The Rave-Ups turn to for their own cover, and so they mention McGuinn. I’ve read in other reviews that The Rave-Ups mess with the lyrics to the song, but that’s not true. All of the lines here are Dylan’s.

The album then ends with “Rave-Up/Shut-Up,” another fun tune. The year after this record originally came out, The Rave-Ups were featured in the film Pretty In Pink, in a bar scene, playing this song while Duckie and Iona talk at a table and Andie and Blane enter. They then are shown playing “Positively Lost Me.” The songs are strongly featured, but neither song was included on the movie’s soundtrack. Who knows what might have happened had the songs been included?

This special re-issue includes eleven bonus tracks. Yes, there are more bonus tracks than original tracks. The first is an unusual cover of Pete Seeger’s “If I Had A Hammer (The Hammer Song)” done to the tune of “La Bamba,” and with a verse of Woody Guthrie’s “This Land Is Your Land” thrown in as well. This track was a demo. That’s followed by two songs performed on a Los Angeles radio program: a cover of Merle Travis’ “Nine Pound Hammer” and “Positively Lost Me.” These two tracks were recorded on March 16, 1986.

There are also some previously unissued original tunes, including “Square Hole,” “The Rumor” and “See You,” all written by Jimmer Podrasky, and “No No No,” written by Michael Kaniecki. These tracks were all recorded in 1986. Also included are early versions of “Train To Nowhere,” “Please Take Her (She’s Mine),” “Mickey Of Alphabet City” and “Blue Carrot.” “Train To Nowhere” is a song that would end up on the EP Hamlet Meets John Doe, while the other three would find their way onto the band’s record The Book Of Your Regrets.

CD Track List
This expanded edition of Town + Country was released on July 8, 2016 through Omnivore Recordings.
Posted by Michael Doherty at 3:12 PM