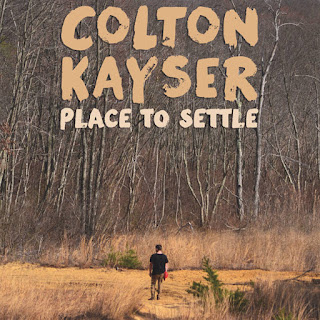 Colton Kayser is a singer and songwriter based in New Jersey. In 2014, he released his self-titled debut full-length CD, which mixed folk sounds with some pop and rock elements and sensibilities. He is now following that up with Place To Settle, which features all original material, co-written by Colton Kayser (mostly with Jon Leidersdorff). Like his debut album, the music here combines folk and pop, and in some ways feels like it goes farther in the pop and rock direction, at least on certain tracks. Joining Colton on this CD are Alex Brumel on electric guitar, PK Lavengood on electric guitar, Roshane Karunaratne on organ and piano, Jeff Levine on organ, Jonathan Tea on piano, Cody McCorry on bass, Erik Kase Romero on bass and percussion, Mike Linardi on drums and Glen Burtnik on backing vocals.

Its opening track, “Bad Guy,” begins in the folk realm, but kicks in and becomes more of a pop song, especially in its chorus. This is a chorus that I found myself singing along to even on the first time through. Partly that’s because it’s easy to remember: “I’m not the bad guy/I’m not the bad guy/I’m not the bad guy/Just give me a try/Give us a try.” But the way Colton sings it, and the way the song builds up to it, makes it perfect for singing along to. Especially as it sometimes comes out of a darker place in the verses: “And when you feel it, you torture me/You lash out, find your hiding place/And test to see if I’ll go away.” I really like the way the chorus rises out of that. It’s followed by the CD’s title track, “Place To Settle,” which has a chorus that is even more catchy:  “I’m just looking/For a place to settle/A place to settle in your heart.” This song has a very positive sound, particularly that happy, groovy instrumental section toward the end, which I love (I especially dig the work on keys). This is probably my favorite track. “And I just realized what you’re really asking me/Will you feel this way tomorrow?/We’ve both been here too many times before.”

“Save My Soul” is another of the disc’s highlights. This one is closer to folk and that alternative country realm, though like the album’s first track, it builds up to its chorus in a deliberate way, which then gives the chorus a greater power. Here are the opening lines (which most of us have been able to relate to at some point or other): “I’m so tired in the morning/I fade through the day/The bags under my eyes/No, they don’t go away.” But this is a song of hope, and it’s during the chorus that he feels the most empowered, the most determined, and the music reflects that energy.

The first time I listened to this album, certain lines stood out. Such as these, from “Love Of My Life”: “Big dreams and little money/Everything I need except you, honey.” Lines I could immediately relate to, even before he added, “Miles and miles away.” Ah, the joys of a long-distance relationship. I’m not sure if this song is making me feel better or worse, but it’s a good song either way. “Love Of My Life” was written by Colton Kayser and Joe Parella.

“Going Down To Georgia” has more of a relaxed country vibe. In this song, he sings about going down to Georgia for a friend. “I’m so proud to be your fool/There’s one thing I know/Oh this is true/That I will follow you/Right until the end.” The album then concludes with “As Kids,” which has a peppy groove and is about following one’s dreams.