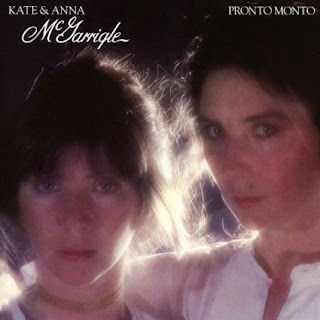 It surprises me when a record hasn’t yet been released on CD, especially when it’s an album by a popular artist. But, until a couple of weeks ago, such was the case with the third album from Kate & Anna McGarrigle, Pronto Monto. Originally released in 1978, Pronto Monto was the duo’s third and final album for Warner Bros. Here the sisters are joined by some seriously talented musicians, including Steve Gadd on drums, David Spinoza on guitar and Michael Moore on bass. There is more of a pop sound to a lot of these tracks than was heard on their first two albums. Apparently, this album didn’t sell as well as they’d hoped. But there are some really good songs here. The CD includes new liner notes by Mark Leviton.

The album opens with “Oh My Heart,” written by Anna McGarrigle and her husband, Dane Lanken. There are brief funky moments by Tony Levin on bass, and I like Anna’s vocals particularly on the chorus, but this isn’t one of my favorite tracks. For me, things get more interesting with the second track, “Side Of Fries,” which is fun, and features a playful vibe and something of an old-time groove at times. And there is some wonderful work by David Woodford on saxophone. “Well, my momma didn’t tell me/And my poppa didn’t say/This world’s a busy place and time just wastes away.” “Side Of Fries” was written by Kate McGarrigle and Philippe Tartartcheff (Tartartcheff also co-wrote “Complainte Pour Ste. Catherine” on the first record and “Naufragee Du Tendre” on the second).  Phillip Tartartcheff also co-wrote this CD’s title track, “Pronto Monto,” its title a play on the first phrase, “Prends ton manteau.” This song is kind of delightful, and features Kate on squeeze box and Chaim Tannenbaum on mandolin.

“Just Another Broken Heart” is a mellow and pretty tune written by David Nichtern, who also plays electric guitar on this track. Nichtern, who produced this record, is probably best known for writing the hit “Midnight At The Oasis,” but he has also composed music for movies like White Line Fever and The Big Picture.

I guess I’m partial to the sillier songs on this album, because one of my favorites is “NA CL,” which is a bit bluesy, a bit jazzy, and provides something of a chemistry lesson with lines like “Just a little atom of chlorine, valence minus one” and “It’s fun to ionize.” It was written by Kate McGarrigle, who also provides a delightful piano part. Here is a taste of the lyrics: “But somewhere in that sea lurks handsome sodium/With enough electrons on his outside shell plus that extra one/Somewhere in this deep blue sea there’s a negative/For my extra energy/Yes, somewhere in this foam my positive will find a home.” And the song’s final line makes me laugh every time: “Think of the love that you eat when you salt your meat.” Plus, there is a tuba. I love this song.

When a songwriter writes about his or her children, the results are generally the artist’s weakest songs. Yes, there are exceptions, of course. But this album’s “Bundle Of Sorrow, Bundle Of Joy” is not one of those exceptions. In general, I would recommend that songwriters refrain from writing directly about their children, or at least from including those songs on their albums. “Come Back Baby,” which follows “Bundle Of Sorrow, Bundle Of Joy,” is a much better tune. Check out these lines: “Somebody I love I know I ought to hate/Runs me ‘round in circles and then he makes me wait/Got no head, got no brains/Just got a heart, and my heart is in pain.” Chaim Tannenbaum plays harmonica on this track.

The album ends with “Cover Up My Head,” written by Galt MacDermot and William Dumaresq. MacDermot is, of course, known for being one of the writers of Hair. (I also just learned he was one of the writers of a musical called My Fur Lady, and now I really want to get a copy of that record. Does anyone have it?) MacDermot and Dumaresq also wrote “No Biscuit Blues,” which Kate & Anna included on their second album, Dancer With Bruised Knees. George Devens plays marimba and percussion on “Cover Up My Head.” “I’m all alone now/I’m on my own now/I guess I’ll go to bed now/Cover up my head.”

CD Track List
Pronto Monto was released on CD on July 1, 2016 through Omnivore Recordings.
Posted by Michael Doherty at 1:44 PM