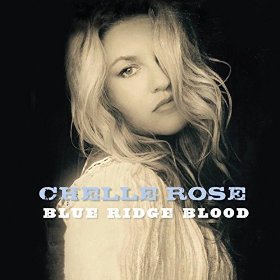 When I first got turned on to Chelle Rose back in 2012, with the release of Ghost Of Browder Holler, the first thing that struck me was her voice. And now with the release of Blue Ridge Blood, her new album, I’m happy to say that nothing has changed in that department. Her voice is so totally without artifice. It’s tough and strong, and approaches you straight-on. A voice that won’t bluff. Of course that voice would only carry the album so far if the songs themselves weren’t good. But this album features some excellent original material. All of the songs on this release were written by Chelle Rose. As on Ghost Of Browder Holler, Chelle is joined by Billy Cassis on electric guitar and acoustic guitar, Rick Richards on drums and percussion, and George Reiff on bass (Reiff also produced the CD). This time she is also joined by Sergio Webb on electric guitar, acoustic guitar, banjo, dobro and ukulele; Johnathon Letner on mandolin; and Bukka Allen on keys. Buddy Miller joins her on harmony vocals for the title track.

The CD opens with “Paintsville Table,” which has a cool, mean vibe right from the start, as Chelle sings about a man who gives up his dreams to take a mining job to support his family. That’s followed by “Reckon With The Devil,” which begins with just percussion and vocals, giving it a delicious raw and immediate feel. “You can pray/You can fight/You can get down on your knees every night.” The guitars too have a raw power, particularly in the instrumental section toward the end.

“Dammit Darlin” has a dark folk vibe. The drums then come in after a minute or so, a steady pounding like a terrifying pulse. And when that breaks, the song arrives at a plateau that almost has a sweetness to it, which comes as something of a surprise. It’s a really interesting and wonderful tune, but the following track, “Not Your Girl,” is even better. It opens with these lines: “I don’t want you/I don’t need you/I don’t care if you stay/Every time you push my buttons/I always give you your way.” As much as Chelle gives us with her voice, in this song she seems to deliver an equal amount of meaning with well-placed pauses. In those opening lines, she pauses briefly before “care if you stay” and after “I always.” In both cases it gives us just the briefest of moments to guess where she’s going. She also pauses after “I am not your girl” each time she sings it, like giving the other person a chance to respond, almost like daring the person to disagree. And of course the person never does. I especially love the pause after “You give me nothing that I need/I am not your girl” – a pause in which you feel anything could happen. What will follow? A scream? A cry? What follows is a great instrumental section. This is one of my favorites. Though the next song is the album’s title track, this song’s lyrics also include the title phrase, in the line “A blue ridge blood running through your veins.”

The title track, “Blue Ridge Blood,” is an oddly delightful folk tune, and is another of my favorites. “Somebody told me when I was a little girl/Blue ridge blood/Better change the way I talk, never make it in this world/Blue ridge blood.” The CD is dedicated to her grandmother, who helped raise her, and this song mentions her directly in its lyrics. Buddy Miller joins Chelle Rose on vocals on this one. “Mean Grandpappy,” also about a family member, has a very different feel. Check out these lines: “Grandpappy Rose was a mean son of a bitch/Beat you with his words, didn’t need no switch/Sitting on the front porch, yelling at my granny/Better spit and shine every damn nook and cranny.” The lines that always stand out are “I went home to Knoxville when they laid him down/Right where he belonged in the cold, hard ground.”

Another of this CD’s highlights for me is “Hidin’ Hole.” Here is a taste of the lyrics: “Just let me lie here/I’ll let you know when my blood thaws/It might take a hundred years/So call off your dogs/I’m down, down in a hidin’ hole/I ain’t saying forever goodbye/Just tired of smiling when all I want to do is cry.” The album ends with an odd little tune, “Sing Pretty,” in which Chelle seems to poke a bit of fun of herself and her own style in lines like “Mama always wanted me to sing pretty/It hurts her to hear the pain that I pour out/So this one’s for my mama/I’m going to try do it sweet/A little less vinegar/More honey to catch the bee.” And the song does have kind of a sweet feel.

CD Track List
Blue Ridge Blood is scheduled to be released on August 5, 2016 on Lil’ Damsel Records.
Posted by Michael Doherty at 4:03 PM