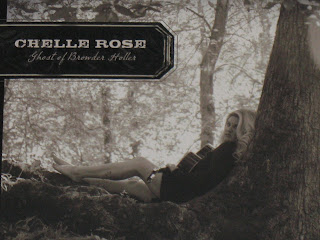 When you pop in Chelle Rose's new CD, Ghost Of Browder Holler, the first thing that will hit you is her voice. At times she sounds like a female Mick Jagger, when the Stones were in their excellent country rock period, the way she deliberately stretches a vowel out. It's a sort of affected twang, that Jagger did so well. She also reminds me a bit of Marshall Chapman, the way her voice creates such a vivid picture, a living world. There is also some of the roughness of Tom Waits in the arrangements and delivery.

That being said, it doesn't feel like she's trying to be anyone but herself. And certainly there's no need for her to copy anyone. Most of the tracks are originals, and Chelle Rose can write a damned good song.

Ghost Of Browder Holler opens with "Browder Holler Boy," a song that is that kind of dirty country folk that I absolutely love. Like folk with an old razor. There is something sexy about it, especially in lines like, "Hold me in my dream/Shake my bed/Turn me upside down/Blood rushes to my head/I feel your touch and I hear you laugh." And suddenly a male voice joins her on the lines, "Did you think that I'd forget you? How could I do that?" I know I won't be forgetting this song anytime soon. And I dig the simple harmonica toward the end.

"I Need You" is more in the rock vein. It works, but I prefer her kick-ass brand of folk. Interestingly, her folk has more of an edge than her heavier rock-oriented tunes.

"Weepin' Willow On The Hill"

Chelle Rose does something a bit sweeter with her voice on "Weepin' Willow On The Hill," but still retains that edge. It's a magical combination, helping to make this one of the album's strongest tracks. I just love the sound of this one, particularly the mandolin played by Brad Rice. It all sounds so perfect and effortless. And check out these lyrics: "Lay my body in the water/It stings my skin like jagged ice/But it ain't colder than your blue eyes/Scared to death to look in mine." Nice, eh? This is one of my favorite songs of the year so far.

"Leona Barnett" is another seriously cool song. Chelle Rose sounds tough, like a serpent, which fits the lyrics, "I am as hard as a railroad spike that holds down this track I'm traveling on." And I believe her when she sings, "And I don't know who I trouble more/The mean old devil or the good old lord." This is the other cover on the album, this one written by Adam Hill.

Okay, the "Range Rovers" line caught me by surprise and caused me to laugh out loud - "Then he started acting weird and driving Range Rovers." Ah yes, that certainly spells trouble.

This one is more of a rock tune, about a relationship in which the man is completely non-supportive of the woman's musical ambitions. She sings, "Said this music that I make, it's a waste of time and money." Then later, in a verse about getting a divorce, she sings, "Took me a long time to figure out a plan/When you've got a couple kids, you put up with the man/But it was him or me, and one was going to die."

She then follows that with "If I Could," an earnest love song that opens with the line, "If you were cold I would warm you like a blazing fire."

Ghost Of Browder Holler ends with "Wild Violets Pretty," which is another of my favorites. Elizabeth Cook performs backing vocals on this one, and their voices sound sublime together. The chorus is, "I'm gonna go where my baby be/Sweet freight train going to carry me/And we'll walk barefoot through the streets of the city/And pick bouquets of wild violets pretty." This song itself is incredibly pretty.

Ghost Of Browder Holler is scheduled to be released on May 1, 2012 on Lil' Damsel Records.

Just one more thought: I'm tempted to put "Rattlesnake In the Road" on a mix CD, and follow it with Phish's "Possum." Any other ideas on songs to follow that theme?
Posted by Michael Doherty at 4:17 PM