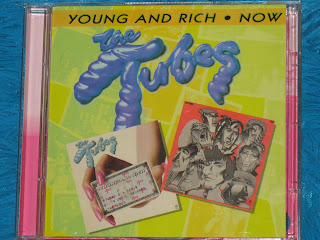 Two early albums by The Tubes - Young And Rich (1976) and Now (1977) - are being issued as a double CD set. It's a joy to hear these albums, which have been out of print for quite a while. This material is much more interesting than that huge hit, "She's A Beauty," the song the band is most known for. Nothing against "She's A Beauty," of course - I always dug that song - but it's more standard fare compared to the songs on these albums.

Listening to these CDs, I understand better why the Grateful Dead chose Tubes keyboardist Vince Welnick as Brent Mydland's replacement in 1990. The Tubes were no run-of-the-mill pop band. This was a band that was fearless, that attempted to get Out There, and to go for it every time. And simultaneously didn't take itself too seriously. You can hear that attitude clearly in every track. Part punk, part rock, park theatrics. If you're into Frank Zappa, you're going to dig these CDs. If you're not into Frank Zappa, what the hell is wrong with you?

Young And Rich opens with "Tubes World Tour." And what a strange song to open with, a song in which they sing their own band name in the line, "The Tubes world tour/A mighty important crusade." Ha! Indeed. And then, "We'll be leaving as soon as we're paid." This song has elements of Bowie and Zappa, as there is something theatrical and funky about it, particularly in the instrumental section. But it's also undeniable rock and roll, and is a lot of fun. Man, these guys must have put on a phenomenal show. I wish I could have seen them back in the seventies.

"Brighter Day" starts with the entreaty, "Come on, baby, I'm in love with you." And the second time that line comes around, there's a wonderful little backing vocal bit in response. And that is the moment that made me fall for this song. This song features a cool groove. You just have to immerse yourself in this band's world, in their sound, in their reality. Surrender, and smile. And the funky instrumental section as it fades out must have had an influence on Phish, particularly on bassist Mike Gordon.

"Pimp" starts off sounding like the city streets at night, where something funky is about to go down. Right away it places you in the realm of the pimp, in his hands. He sings, "We'll use my car, and my brain, and your my oh my oh my oh my/You won't feel nothing, baby/You'll be real high with those bloodshot eyes/See those twenty dollar thighs." Oh yes, this band could make whores of us all. "Can't you control your bitches."

(This is another song that seems to have had an influence on Phish - you'll hear it in the instrumental section approximately two minutes in.)

"Stand Up And Shout"

"Stand Up And Shout" is a David Bowie-like rock and roll number with some damn fine work by Vince Welnick on keys. Here's a taste of the lyrics: "And just because somewhere along you started feeling wrong/And it had been too long since you opened your mouth/Then you get to wondering why it took so long to find/There's just one thing you can't do without/You'd better stand up and shout."

As it goes on, after the false ending, it seems sillier, going from Bowie to Spinal Tap (though it's in that section that there is a reference to "All The Young Dudes," which was written by David Bowie).

"Don't Touch Me There"

"Don't Touch Me There" is an delightfully odd duet that seems like something from The Rocky Horror Show, or something Meatloaf might do, as it parodies those early 1960s girl groups. And it's fucking hilarious. Re Styles sings, "Unzip that jacket/That leather smells so sweet/Put your chest against mine/Feel my heart beat." And then Fee Waybill replies, "I love the way your belt fits/The way it hangs so low/So low on your hips, my darling/I want you so." They sing together, "The smell of burning leather as we hold each other tight." But then she stops him: "Don't touch me there/Please, don't/Oh no, not there/Anywhere but there."

"Slipped My Disco" is a disco song about hurting oneself on the dance floor (slipped disc, get it?). Apparently, Bill Spooner actually threw a disc while on the dance floor, and that's how this song came about. "I slipped my disco when I was dancing with you, baby." As for placing the blame, "Maybe it's my technique, or is it my shoes?" Blame the shoes. Definitely the shoes. So please, be careful when dancing around to this song. Perhaps go barefoot. I love the crazy instrumental section at the end.

"Slipped My Disco" goes right into "Proud To Be An American," a goofy rockabilly tune. Don't worry, it's not that "God Bless The U.S.A." proud-to-be-an-American garbage done by Lee Greenwood, which has my vote for the worst song ever recorded. This one is a playful tune, which lists all of the wonderful elements of this country, and yes, it's very funny (it rhymes "the constitution" with "land, sea and air pollution"). This album was released the year of the bicentennial of the United States.

I can't help but wonder what this album would do to me if I were on mushrooms. If anyone takes that plunge, please let me know the results.

The second album, Now, isn't quite as fantastic as Young And Rich, but is still good and worth listening to.

It opens with "Smoke (La Vie En Fumer)," a strange funky dance tune about night life and smoke, the social constructs surrounding smoking. This song is humorous, with lines like "Satisfy that urge for fun/Then brush your teeth and grab a taxi home" and "I just found out the other day it's a drag," a line that made me laugh. "The whole world is smoking/I can't stop choking." This song has a reference to The Byrds: "I'm eight miles high" (so maybe not about tobacco after all?). It also has some nice percussion.

"Strung Out On Strings"

"Strung Out On Strings" is a song about a guitar enthusiast, who as a boy chose guitars over girls and baseball. It begins like a bizarre theatrical confession: "No one made me do those things I've done/I did it 'cause it seemed like fun." But when it kicks in, oh boy!

This song seems to effortlessly drift into several musical genres (even with a little "Baba O'Riley" nod on guitar). And sure, there are lots of love songs to guitars, but this one certainly has its own feel. Is guitar-playing an addiction one really wants to kick? I don't think so. Yet this song finds him hoping his prospective, hypothetical son won't follow in his footsteps. "Strung Out On Strings" has a false ending.

"God-Bird-Change" is an instrumental track, and a fun tune, like if the Phantom of the Opera went on a weekend bender and created a carnival ride. "God-Bird-Change" was written by Mingo Lewis, who had recently joined the band as its second percussionist, and there is a great percussion section in this song. Be ready to dance when this track comes on. And if you listen on headphones, there will be a jolt or two.

"Cathy's Clone" is a crazy, jazzy tune with some nice work on drums by Prairie Prince. And that's Captain Beefheart on alto sax. Re Styles does lead vocals on this track, singing "Let me introduce myself/I'm not Cathy/I'm Cathy's clone." Oh yes, science has gone mad, and these are the glorious results. Onward!

Despite its title, this song has nothing to do with Shylock and Antonio. The pound these guys are singing about is nothing Shylock thought about taking. But his daughter Jessica might have been interested in it. This rock tune is about a "ninety pound weakling with a pound of flesh." He sings, "I'm a lover, not a fighter/Won't you spend a one-nighter/With my pound of flesh."

The Tubes are Bill Spooner on vocals and guitar, Fee Waybill on vocals, Michael Cotton on synthesizers, Prairie Prince on drums, Vince Welnick on keyboards and synthesizer, Rick Anderson on bass and vocals, Roger Steen on guitar and vocals, Re Styles on vocals, and Mingo Lewis on percussion (Lewis appears only on Now).

This special re-issue of Young And Rich/Now is scheduled to be released on March 27, 2012 through Real Gone Music. By the way, I love the pink and lime green CDs.
Posted by Michael Doherty at 5:39 PM