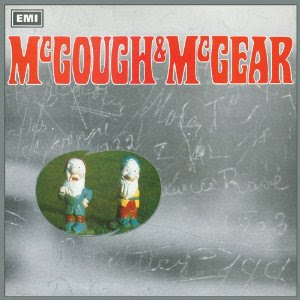 I'm not sure what to make of this one. Roger McGough and Mike McGear (whose real name is Mike McCartney - yes, Paul's brother) were members of a comedy group called Scaffold. So clearly they're approaching this with a sense of humor. You can tell even by the track list that it's not overly serious (for example, a song titled "Mr. Tickle" is likely not a heartsick love ballad). Yet, it's more than just a bit of silliness. After all, Jimi Hendrix is on this recording, and I've never thought of him as a comedian.

This CD is a very strange collection of tracks, and even within a given track, there are all sorts of odd changes. There is spoken word and there is psychedelic rock, sometimes together. There is pop. Some tracks are more effective than others ("Basement" is a bit too repetitious on the whole "Why don't you marry me" bit). But it is certainly interesting, and it captures a bit of that odd year 1968.

One thing I could do without is the repeated use of a sound effect of ocean waves. That effect is present in tracks one, four, six, eight and ten. But there is a lot of strangely good stuff here.

The opening track, "So Much," begins with sound effects of water before going into some heavy 1960s rock (that's Jimi Hendrix on guitar). But the vocals are firmly in the pop vein, with some silly whispering backing vocals, "so much so much so much," which are actually rather delightful.

So how serious are they? Maybe it doesn't matter, because the tune works as a bit of late '60s psychedelia. And it features Paul McCartney on backing vocals. The lyrics are definitely of their time, with lines like "So much in love/The sun shines in and out from your eyes" and "So much in love/I ride the clouds high up in the sky." The song ends with some more wave sounds.

"Little Bit Of Heaven" is a tune about World War III. It seems to be making fun of Irish folk music at the start. Then the song goes into a spoken word section. "The rich huddle outside the doors of their fallout shelters like drunken carol singers/The poor clutching shattered televisions and last week's editions of TV Times, but the very last." Yes, it's end-of-the-world spoken word comedy. I like the spoken word stuff, but the affected Irish accent during the other sections is off-putting.

"From: Frink, A Day In The Life Of" and "Summer With Monika"

There are two tracks titled "'From: Frink, A Day In The Life Of' and 'Summer With Monika.'" The first, subtitled "Prologue Introducing A) Moanin' And B) Anji" begins with more wave sound effects, and then goes into spoken word. "They say babies were born, married couples made love, often with each other/And people died, sometimes violently." It's a summer described as ordinary, except that it wasn't, for the narrator spent the time with Monika. The guitar comes in after about a minute. The track functions as a weird love poem. "At first we kept birds in a transistor box to sing for us/But sadly they died, we being too embraced in each other to feed them." And yes, it's funny. But it's also sweet, at least at the start.

It seems over, then starts again, with jazzier guitar. Then the guitar disappears for a bit. And then the song really does take on a bluesy jazzy element, with drums and even a horn (this is around the four-minute mark). This track is really like a story - it seems like it should include a book so I can read along, and look at the goofy, whimsical pictures. (Ha! After reading the liner notes, I learn there was a book. A book of poetry titled Summer With Monika. So there.)

Later in the story, he laments, "The house is full of sexy men/Monika, don't you love me anymore?" There are some wonderful absurdities in the lyrics, like "The biscuits are having a party - they're necking in our bread bin" and "As I was helping the potatoes off with their jackets I heard you making a date with the kettle." And I love the line, "Your finger sadly has a familiar ring about it." This track is approximately nine minutes - nine of minutes of wonderful oddities that I can't help but love.

The second of those two tracks (the fifth track) is a continuation of the story, and is subtitled "Epilogue." This one is much shorter, and the two really could have been offered all as one track. "We kissed the sleep from each other's eyes and went out into the world/And now summer's here again." Their home has lost its magic, in lines like "The room no longer a world for make-believing in/But a ceiling and four walls that are for living in."

"Yellow Book" is a strange little song that really got under my skin. Here is a taste of the lyrics: "Your ear to the window pane/Listening for the secrets in the chatter of the rain/Which cloud has got married/Which one's left his wife/Which one has joined the army/Which one has lost its life." I really dig the piano on this track. It's songs like this that make me hope these guys are at least a bit serious, because I really like this song, and I'd feel a bit of a fool if it were all in jest.

"Mr. Tickle" is another spoken word story, this one of a fifty-year-old man named Edward Tickle whose good house begins shaking. Edward figures it's hungry, and so feeds it bricks.

"Please Don't Run Too Fast" is a goofy little tune about an old, lonely man watching children through the window. He sings, "Life is far too fast," and the line is repeated and sped up. Then the song returns to the main section again before he says to "Drop in anytime just to say hello."

This CD concludes with "Ex Art Student," another odd late '60s bit of pop, with vocals at first like the Beatles ("Good Day Sunshine"), and then possibly like Beach Boys or something, but only on the title line. (And on the "attic" bit, the song is reminiscent of The Who - listen to those drums and the bass.) The song fades out before the title line is repeated again. But mainly the song lists artists. There is also a section that is a deliberately messy bit of psychedelia, with sitar, and yes, with Jimi Hendrix again. Then it breaks back into "Ex art student," which caused me to laugh out loud.

(But as these guys were part of a comedy team, you have to wonder if they're perhaps making fun of the whole psychedelic music thing.)

CD Track List
This special re-issue of McGough And McGear as released on February 21, 2012 through Real Gone Music.
Posted by Michael Doherty at 5:50 PM