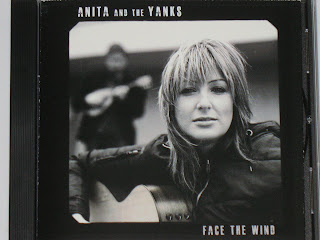 I completely fell in love with Anita Mansfield the first time I saw her perform. It was on St. Patrick's Day a few years ago in some bar I can't recall the name of. Though it was St. Paddy's Day and not Christmas, she did a beautiful rendition of The Pogues' "Fairytale Of New York," and I was hooked. Since then, I've caught her shows whenever possible. She does great versions of "Drunken Sailor" and "The Fields Of Athenry." The last time I saw Anita And The Yanks, they did a kick-ass version of "Rocky Road To Dublin," a song which is really difficult to sing, there being little to no space to breathe. Anita And The Yanks perform a lot in the Los Angeles area, in various configurations. If you get a chance to see this band, do it. Put on your dancing feet, and do some Irish step-dancing. Or fake it.

For those folks who can't make it to a show, there is Face The Wind, the band's CD, which features almost entirely original material. (Those people who have made it to the band's shows have undoubtedly already picked up this excellent disc.) Anita is from Ireland, and that land definitely plays an important part in her music. There is something ethereal in the feel and delivery of these songs. It's like folk infused with an ambient sort of pop. There are some beautiful songs here, like the sweet "Rosaria" and the gorgeous "Sailing." This album has the power to transport you. Turn up the volume, sit back, and enjoy.

Face The Wind opens with "Memories," which starts with a wonderfully pretty and sweet guitar part. And soon after Anita's beautiful voice comes in, this song actually takes on more of a pop feel. And though there is something sad in a love song titled "Memories," the song has a positive, optimistic feel. Here is a bit of the lyrics: "I'm a world away from you/I should have stayed there with you/Miles apart, oceans roar/We should be together."

"Cailin Deas" begins with a steady drumbeat behind the vocals. This song has more in common with pop (her voice even reminding me of Madonna in a few key moments) than folk. But the song is a wonderful combination, with some great stuff on fiddle, which plays beautifully over a disco-like beat (listen to that hi-hat). This band really creates its own sound. The songs on this CD transcend and defy genre and categorizing.

"Wild Stag" is a beautiful, uplifting tune. Co-written by Jack Lancaster, "Wild Stag" includes the lines, "The western hills are veiled by your ocean/I saw you/I saw you standing upon your light of wisdom/You had your freedom, you had your following." I love the song's instrumental section.

"Black Is The Colour"

"Black Is The Colour" is the album's one cover song. It's a traditional tune and a gorgeous song. I've never heard a bad rendition of it. Anita's version is excellent. Her voice truly soars on this track. And the fiddle is incredible, especially its intense build toward the end. There is also some nice work on drums by Tommy Amato. Here is a taste of the song's lyrics: "Satisfied I never will be/I write him a letter, just a few short lines/And suffer death a thousand times/For black is the colour of my true love's hair."

"Everchanging" is another of my favorites, and is probably the album's best track. This song is seriously impressive, in its structure, and of course the vocals. (This song is slightly reminiscent of "Life In A Northern Town" in the vocals in a few lines at the beginning, or perhaps that's just me.) There are some interesting changes, and I love the mandolin.

In this one, Anita sings, "Spending so many days/Wasting the time away/Waiting for you to change/One day you're here with me/The next day you're lost at sea/That's the way it is." "Everchanging" ends abruptly on a generous wish, "Hope that all your dreams come true."

Musicians on this recording include Anita Mansfield on vocals, guitar and mandolin; Bryan Dobbs on mandolin, guitar, bass and backing vocals; Rachel Grace on violin; Ryan Dean on drums; Tommy Amato on drums; Andy Reilly on drums; and Pat D'Arcy on uilleann pipes and whistles.