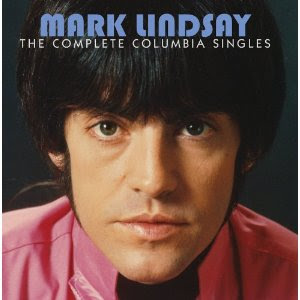 Mark Lindsay is most well known for being the lead vocalist of Paul Revere & The Raiders, a 1960s rock band with a fun, loud garage-type sound. But in 1969 when he went to record his solo work, he chose a different type of sound, a different type of song. These songs are definitely softer than what he'd been doing, but still powerful. His vocal work on this collection will likely come as a surprise to anyone who has only heard his work with The Raiders.

These songs were recorded between 1969 and 1974, and are presented in the order in which they were released, with the exception of the first track, which was recorded first, but left unreleased until now. There are a lot of excellent songs here, and some of this collection's best tracks are the flip sides written by Mark Lindsay, particularly "All I Really See Is You" and "Don't You Know."

This collection opens with "Reason To Believe," a song written by Tim Hardin, and made famous by Rod Stewart. This track was previously unreleased, though it was intended to be Mark Lindsay's first single. This is a sort of sweet and playful version of the song. His voice only takes on that famous edge briefly near the end. There are also interesting deep backing vocals just below Mark's voice on some lines, especially at the beginning.

"First Hymn From Grand Terrace" ended up being Mark Lindsay's first single, released in 1969. Written by Jimmy Webb, this song features prominent strings, and so right away it differentiates itself from the Paul Revere & The Raiders sound. This is a rather tame song with lines like, "There was a DJ in L.A./We used to tune in late at night to hear our favorite song/And we always heard it at that perfect time/Up on that hill we climbed/And now you're gone, and I'm alone." It reached #81 on the pop chart.

"The Old Man At The Fair," the single's flip side, was also written by Jimmy Webb, and it too features strings. I actually like this song a lot more than its A side. It's a more playful and interesting song, and is undeniably catchy.

In Mark Lindsey's next single, "Arizona," he really belts it out. This song was a big hit, reaching #10 on the chart. Written by Kenny Young, this famous song has a delightful exuberance.

"Man From Houston," the single's flip side, was a song written by Mark Lindsay, but one very different from the tunes he wrote for Paul Revere & The Raiders. It has something of a country feel, and a definite sweetness. The song expresses an interesting yearning for the normalcy of a family. As he rides alone in a taxi, he thinks about the man who sat next to him on the plane. He sings, "Flew beside me all the way from Houston/And showed me pictures of his kids/And talked about his wife/Told me how she would be waiting in their yellow station wagon/With a hug and kiss to give him/Saying I love you/I wonder if I'll ever be like that man/Happy with his family and dying to go home."

"Silver Bird" was written by Kenny Young, and has changes that are similar to those of his other song, "Arizona." It's not as strong a tune, and reached #25 on the chart.

Its flip side, like the flip side to "Arizona," was a song penned by Mark Lindsay. This one, titled "So Hard To Leave You," is a love song with lines like, "I never thought I'd see the day when I believed in someone/Now I believe in someone/I can feel your eyes melt away the cold inside me/It feels so good when you're beside me."

"And The Grass Won't Pay No Mind"

I'm a big fan of Neil Diamond (at least, everything he did up through September Morn), and I always kind of dug "And The Grass Won't Pay No Mind." It was originally released on his 1969 album, Brother Love's Traveling Salvation Show. But I first heard it on the 1976 compilation And The Singer Sings His Song.

Mark Lindsay's rendition, released in 1970, is faithful to the original. It reached #44. Here is a bit of the lyrics: "Close my eyes and hear the flowers growing/As you lay sleeping in my arms/And the time will be our time/And the grass won't pay no mind."

"Problem Child" is one of my favorite tracks from this collection. Like "Arizona" and some of the others, the chorus is belted out in great contrast to the verses. But unlike, say, "Silver Bird," the entire flow of the song makes sense. And there is some nice work on guitar. It was written by Mac Davis. For some reason, it only made it to #80 on the chart.

Here is a taste of the lyrics: "I can give you a complete love/It ain't the kind you'll find on the street, love/You can fight it, but you know you won't defeat love/All my sweet love is going to bring you running home to your man/Problem child."

"Been Too Long On The Road"

More of a rock tune (at least at first) than many of this collection's tracks, "Been Too Long On The Road" was written by David Gates, the lead singer of Bread. This song has a definite power, and feels like an entire story rather than a pop song, because of its changes and arrangement. It only reached #98 on the pop chart.

Its flip side, "All I Really See Is You," is a really cool tune written by Mark Lindsay. I love his vocals on this one. And this song has some excellent lyrics: "But you keep saying you've been changing/But I perceive just what you are/And what I see - perfection that's so hard to believe/But skin-deep beauty only carries you so far/I've witnessed many disguises before my eyes/I've seen many a changing view/Watch the long parade of your charades" and "And I'm sure you're somewhere near the top/But the life you lead is composed of your fantasies." It's a song about leaving, and it's is one of my favorite tracks.

"Are You Old Enough"

Its flip side, "Don't You Know," is another surprising gem. At times, I found myself swaying and tapping along to its rhythm, but the song isn't afraid of getting a bit weird too. Written by Mark Lindsay, "Don't You Know" is probably my favorite from this collection.

"California" is about a girl who was a hit in the high school play, but now wants to go out to California to make it big. And it's sung from the perspective of a boy who loves her, and doesn't want to stand in the way of her dreams.

This one features a groovy pop rhythm on the lines, "The glitter and the glamour are turning to rust/The stars on the sidewalk are covered with dust/All the movie lots are just about to go bust/In the whole big town, there's not a soul you can trust." Sadly, these are lines that are still pertinent, and strike a chord with a lot of folks. He then sings, "If your dreams don't come true, I'll be waiting here for you/Because to me you'll always be a star/And I'll still love you just the way you are." This is a wonderful pop song.